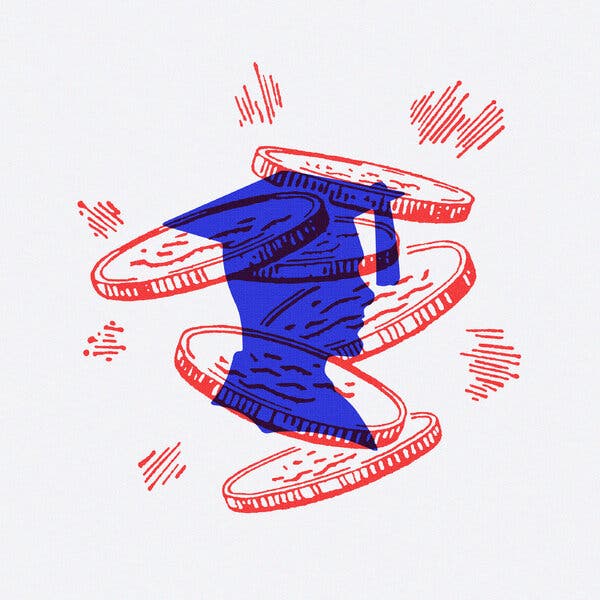 The New York Times opinion writer, Peter Coy, has a piece this morning entitled, “To Tackle Student Debt, Fix Ineffective Colleges.”  His message is that while President Biden and the federal government are debating and considering college student debt forgiveness, it would be a good time to also consider examining and correcting the operations of unscrupulous colleges as well as excluding debt forgiveness for graduates who will have high lifetime earnings such as doctors and other professionals.

Coy covers important background on the issue such as “In 2018, then-Education Secretary Betsy DeVos scrapped a regulation that would have forced for-profit colleges to prove that students they enroll are able to obtain decent-paying jobs. A 2018 New York Times story called the move “the most drastic in a series of policy shifts that will free the scandal-scarred, for-profit sector from safeguards put in effect during the Obama era.”

He goes on to comment that:  “The overall solution is clear: Limited forgiveness coupled with increased aid and reforms that keep future students from piling on debt for worthless studies. Cardona, the education secretary, testified in Congress on Thursday that the Biden administration is seeking to double the maximum Pell Grant by 2029 and to increase support for minority-serving institutions. It has reinstated an enforcement unit to crack down on financial aid fraud by institutions and is working on a new rule to ensure that graduates obtain gainful employment, he said in January. Those moves are in the right direction.”

Coy’s piece is below and worth a read!

Before the federal government forgives student loan debt, it would be good to understand what makes the debt so onerous. The problem isn’t overwhelming debt — it’s underpowered education.

Postgraduate borrowers aren’t earning enough money to repay their loans because whatever they studied didn’t give them the skills to get a sufficiently well-paying job.

Think about it: Even a big debt is manageable if you incur it to get, say, a medical degree. Conversely, even a small debt is unaffordable if you major in a field with limited career prospects or low pay or, worse, you drop out with nothing to show for your efforts. The high price of tuition simply compounds the problem.

This obvious point has been obscured in the current debate over loan forgiveness, which focuses on the symptom of unaffordable debt rather than the cause, namely unproductive education.

If the federal government forgives most or all student loan debt without fixing the schools, it will just keep the vicious cycle going. Students will continue to borrow, their money will disappear into the bank accounts of ineffective schools with slick marketing, and in a few years there will be a fresh clamor for loan relief. That will be bad for the students, for taxpayers and for employers, who need a genuinely well-educated work force.

I thought about this on Thursday when I read a news release from the U.S. Department of Education announcing that 28,000 people who borrowed to attend Marinello Schools of Beauty from 2009 through to its closure in 2016 would have a collective $238 million in debt discharged. “Marinello preyed on students who dreamed of careers in the beauty industry, misled them about the quality of their programs, and left them buried in unaffordable debt they could not repay,” Secretary of Education Miguel Cardona said in the release. (By the way, as of Thursday the Small Business Administration still had a web page boasting about helping finance Marinello’s expansion, though it seems to have been taken down after I asked about it.)

The problem is, of course, much bigger than Marinello Schools of Beauty. Only a small percentage of the schools that fail to educate are outright predatory, but those that are well meaning but ineffective are just as bad from the point of view of the students and the economy. According to the latest data from the Department of Education’s National Center for Education Statistics, only 26 percent of students who enrolled in private, for-profit institutions in 2013 managed to graduate within six years. Other schools’ six-year graduation rates weren’t great, either: 62 percent for public institutions and 68 percent for private nonprofits.

A report last year by Third Way, a center-left think tank, found more than 500 schools where the average low-income student who enrolls earns less than an average high school graduate, even 10 years after enrolling. “It’s unlikely that low-income students who attend these institutions will ever be able to recoup their educational investment,” the study said.

Congress is at fault, said Adam Looney, an expert on student loan debt who is executive director of the University of Utah’s Marriner S. Eccles Institute.

“The debt crisis is a very recent phenomenon,” he told me. “There was a previous crisis in the 1980s. The loan default rate then was three times what it was in the Great Recession. The cause was terrible schools that enrolled unsuspecting students and saddled them with unaffordable loans. So Congress enacted very strict rules. If your default rate was too high, your institution was kicked out of the loan program. Or if students were too reliant on federal aid. Or you used aggressive recruitment techniques. Or you taught everyone remotely. Thousands of schools were kicked out and the default rate plummeted.”

Looney continued: “Then in the late ’90s or early 2000s we eliminated the distance learning rule. There were no checks on quality. We gutted rules on default rates and the fraction of funding that could come from federal sources. We eliminated loan limits for grad students. All this has allowed proliferation of low-quality schools.”

In 2018, then-Education Secretary Betsy DeVos scrapped a regulation that would have forced for-profit colleges to prove that students they enroll are able to obtain decent-paying jobs. A 2018 New York Times story called the move “the most drastic in a series of policy shifts that will free the scandal-scarred, for-profit sector from safeguards put in effect during the Obama era.”

The federal government could reinstate the safeguards imposed under Obama and previous presidents, but the current focus among Democrats in Congress is on debt relief. President Biden has repeatedly extended a pandemic moratorium on student loan debt repayment. The current moratorium is set to expire on Aug. 31, so he will have to decide soon whether to extend it yet again or go for permanent relief. Whether he could forgive debt himself by executive order, or would have to ask Congress to do so, isn’t clear.

Some progressives, including Senator Elizabeth Warren, Democrat of Massachusetts, are pressing for across-the-board debt forgiveness in the belief that it would mainly benefit the poor and lower middle class, in particular Black borrowers, who are at greater risk of defaulting.

In reality, across-the-board forgiveness would help the rich much more than the poor, according to Looney. The debate over this question is mind-numbing, but I’m persuaded by two points that Looney makes. First, some of the borrowers who look poor at first glance — such as fresh graduates of medical school — are rich when you take into account their lifetime earnings potential, which they bolstered through their studies. Forgiving the debt of these nominally “poor” people would not exactly strike a blow for the proletariat. Second, many lower-income people already receive limited debt relief. Full debt forgiveness is less of a benefit to a low-income person who wasn’t likely to pay in full anyway, whereas it’s a valuable benefit to an upper-income person who would have paid in full.

Looney is all in favor of selective debt forgiveness. “Just about everyone agrees that individuals who experience low income for a period of time and cannot pay their loans in full or part should have the majority of their loans forgiven. (Indeed, that’s the law now, even if poorly implemented.),” he wrote in an email. “So the contested ground (and the progressive position) is around advocating for forgiveness for people whose incomes are sufficient to pay.”

And that — forgiveness for people who don’t need forgiveness — seems a bit daft. “Alongside my kids’ student loans, I’d like the government to pay off my mortgage. If the latter idea shocks you, the first one should too,” David Autor, an economist at Massachusetts Institute of Technology, commented in a 2020 survey of leading academic economists by the Initiative on Global Markets of the University of Chicago Booth School of Business.

We all benefit from a more educated populace, so it makes sense to help people get college degrees, but making federal loans and then (maybe) forgiving them isn’t the way to do it. Better to hold down the cost of tuition by giving more support to schools that actually do educate, giving more grants in place of loans to students, or both.

Since money talks, the government has a right to steer students toward fields of study that are in demand. On the other hand, we don’t want only the independently wealthy to learn about art, history and philosophy. Striking a balance between career education and the liberal arts is tricky, but possible.

The overall solution is clear: Limited forgiveness coupled with increased aid and reforms that keep future students from piling on debt for worthless studies. Cardona, the education secretary, testified in Congress on Thursday that the Biden administration is seeking to double the maximum Pell Grant by 2029 and to increase support for minority-serving institutions. It has reinstated an enforcement unit to crack down on financial aid fraud by institutions and is working on a new rule to ensure that graduates obtain gainful employment, he said in January. Those moves are in the right direction.

I like what Kevin Carey, an expert on higher education, wrote last year in Washington Monthly: “The amount of new money currently being proposed for higher learning is historic. It would be an enormous missed opportunity to spend that much and do little to change the underlying structures that keep too many students down.”