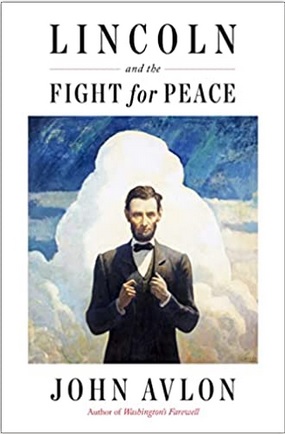 I have just finished reading Lincoln and the Fight for Peace by John Avlon.   Abraham Lincoln and Civil War  buffs will find this an enjoyable and insightful read.  It covers the period leading up to the end of the Civil War, the Reconstruction and beyond and concludes with commentary of the present day.  John Avlon is a regular commentator for CNN and is usually on its morning show with a segment entitled “Reality Check” that reviews a current issue and provides data-backed commentary on whatever position he takes.  These segments are smart and helpful.  I would say the same for his book.  People who know the Civil War period and its aftermath well will probably not learn anything new but for others, it will be a quick and interesting read.  One of Avlon’s main themes is that we could use the wisdom of a Lincoln for our modern times.

In one provocative passage Avlon quotes Ulysses S. Grant a decade after Appomattox:

“If we are to have another Civil War, I predict that the dividing line will not be the Mason and Dixon [Line}, but between patriotism and intelligence on the one side, and superstition, ambition, and ignorance on the other”

A Lincoln for Our Polarized Times

LINCOLN AND THE FIGHT FOR PEACE

Political polarization and the weather have this in common: Everyone talks about them, but nobody seems to do anything about them. John Avlon — who edited The Daily Beast from 2013 to 2018, is now an analyst for CNN and has published serious studies of American political centrism — believes he has a solution to polarization, if not polar weather, and that is the figure of Abraham Lincoln. In this elegant, almost conversational, exposition of Lincoln the “soulful centrist,” the 16th president appears as the reconciler in chief, who not only saved democracy from destruction in war but also pointed the way to saving it from inertia and futility in peace. And, Avlon believes, the Lincolnian example could be a similar balm for our political wounds today.

Avlon devotes much of “Lincoln and the Fight for Peace” to the last six weeks of Lincoln’s life, from his eloquent Second Inaugural (and its memorable exhortation, as the Civil War folded to its close, to show “malice toward none” and “charity for all”) to his assassination on April 14, 1865. Studding this story are abundant examples of Lincoln’s determination at war’s end to blend justice with reconciliation, lest justice alone become punishing and reconciliation alone produce a peace that made the war’s horrendous loss of life “meaningless.”

To read these chapters is to discover Lincoln’s rare compound of “empathy, honesty, humor and humility.” This is the Lincoln who surprised the Confederate judge John A. Campbell with his “genuine sympathy for the bereavement, destitution, impoverishment, waste and overturn that war had occasioned at the South.” But this is also the Lincoln who tells the African American soldiers of the Black 29th Connecticut that “you are now as free as I am,” and if they meet any Southerners who “claim to not know that you are free, take the sword and the bayonet and teach them that you are; for God created all men free, giving to each the same rights of life, liberty and the pursuit of happiness.”

These are not unfamiliar tales to students of Lincoln, but Avlon makes the retelling affecting and powerful. At the same time, Avlon plays down the highly ideological Lincoln. However much he preferred to avoid controversy, Lincoln relentlessly dedicated his political life to deploying a domestic agenda of tariffs, banking and economic infrastructure-building that deliberately overturned six decades of Democratic economic policy and set the country on a new path, which endured until 1932. What’s more, his most famous utterance before the war — the “House Divided” speech of June 1858 — was a confrontational demand that the nation make up its mind over slavery and freedom, and become “all one thing or all the other.”

As much as Avlon is convinced that Lincoln’s “commitment to reconciliation retains the force of revelation,” “Lincoln and the Fight for Peace” is short on the exact content of that revelation for the postwar years. Frederick Douglass insisted in 1866 that “Mr. Lincoln would have been in favor of the enfranchisement of the colored race,” and Avlon is not wrong to see Lincoln favoring a reinvention of the South as a small-scale manufacturing economy to replace the plantation oligarchy that triggered the war. But Lincoln played his political cards so close to the chest that, beyond this, it is unclear exactly what directions he thought Reconstruction should take. It is still less clear whether even he would have been successful (had he survived the assassin’s bullet) in pulling any of it off in just the three years that remained to him in his second term.

We suffer today from political cultures that have grown so incommensurate in their substance and goals that we hardly seem to speak with one voice as Americans anymore. Avlon is right to offer us comfort from the fact that we have been at moments like this before, and survived. But Lincoln was not entirely the “soulful centrist.” And centrism, unhappily, did not spare us either a hideous civil war or a botched reconstruction.

Allen C. Guelzo is the author, most recently, of “Robert E. Lee: A Life.”