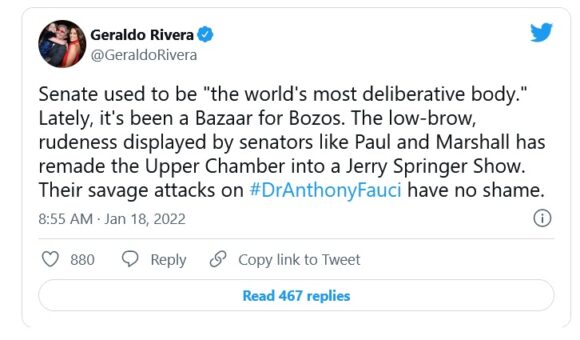 The Senate “used to be ‘the world’s most deliberative body,’” the conservative commentator wrote on Twitter (see above).

But “lately, it’s been a Bazaar for Bozos,” he lamented.

Rivera called out the “low-brow, rudeness” from GOP senators like Rand Paul (Ky.) and Roger Marshall (Kan.), who have both launched unhinged attacks on Dr. Anthony Fauci, the nation’s top infectious diseases expert, in recent weeks.

Paul ridiculously blamed Fauci for all deaths from the coronavirus in the United States. Marshall, meanwhile, pursued a futile line of inquiry when he grilled Fauci on making public his investments which are actually already in the public domain, prompting Fauci to say on a hot mic: “What a moron. Jesus Christ.”

Paul and Marshall’s “savage attacks” on Fauci “have no shame,” Rivera added in his tweet.

I am not a big fan of Geraldo Rivera but he is telling it like it is!