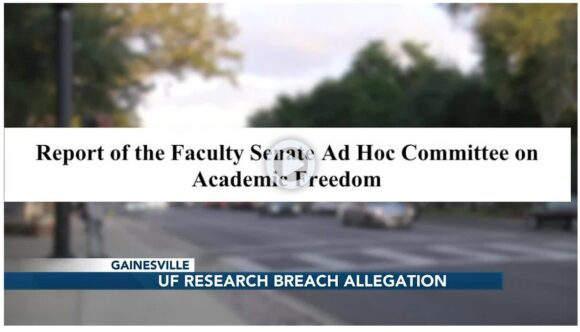 The  University of Florida is investigating possible violations of its research integrity policy following a 274-page faculty committee report that included claims of pressure to destroy and barriers to publish COVID-19 data.

It is the latest development of the university’s academic freedom saga, which began in late October when it became public that multiple professors were restricted from participating in lawsuits against the state. The issue has developed into a nationwide debate over academics, freedom of speech, politics, prestige and money that has reached as far as UF’s accreditor and U.S. Congress.  As reported by The Gainseville Sun and USA Today.

In an emailed statement sent to faculty and staff on Friday, David P. Norton, the university’s vice president for research, said University of Florida Research and the university’s Office of Compliance and Ethics have initiated a formal investigation. He added that its results would be “made public once completed” but did not specify a timeline.

“The University of Florida takes breaches in research integrity very seriously and has a long-standing, rigorous process in place to investigate them,” Norton’s statement read.

The committee report also discussed faculty members’ “grave concern about retaliation” and “a sense that anyone who objected to the state of affairs might lose his or her job or be punished in some way.”

Christina Pushaw, press secretary for DeSantis, emailed a statement to The Sun on Sunday about the faculty senate document. It read, “The report contains plenty of unsourced allegations and innuendo but zero evidence that Governor DeSantis or anyone connected to the governor’s office has exerted or attempted to exert improper influence on University of Florida. This is because it did not happen … Governor DeSantis does not interfere with the internal matters of UF, which this is.”

The University of Florida is fine institution.  It is a shame that it is being drawn into the muck of state politics.