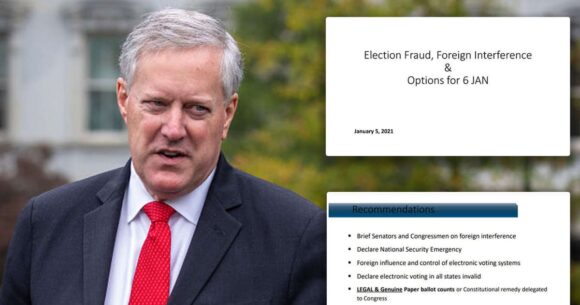 Former White House chief of staff Mark Meadows provided an email to Jan. 6 investigators that referred to a PowerPoint plan showing how Donald Trump could use emergency presidential powers after his 2020 election defeat to overturn the vote, according to several media reports.

The plan involved then-president Trump declaring a national security emergency to delay the certification of the 2020 election results, then manhandling the vote to favor him and stay in the White House.

It was not clear who created the PowerPoint plan or how it came to be emailed to Meadows. Meadows’ lawyer said the former chief of staff did not act on the plan or otherwise do anything about the email, according to The New York Times.

The chilling 38-page presentation, titled “Election Fraud, Foreign Interference & Options for 6 Jan,” was referred to in an email sent on Jan. 5, the day before the violent attack on the U.S. Capitol while Congress certified the Electoral College vote. The email was among a trove of documents provided by Meadows to the House select committee investigating the riot.

Phil Waldron, a retired Army colonel who contributed to and helped circulate the PowerPoint told The Washington Post that he discussed it as many as ten times with former Chief of Staff Mark Meadows.

He also said he briefed several members of Congress on the PowerPoint of “options” with a team the night before the Jan. 6 insurrection — and attended a meeting with then-President Donald Trump and Pennsylvania lawmakers in the Oval Office weeks after the election, the Post reported.

The PowerPoint plan involved Trump declaring a national security emergency to delay the certification of the 2020 election results, then manhandling the vote to keep him in the White House.

Waldorn is a cybersecurity expert who specialized in psychological operations in the military. He was working with Trump’s outside lawyers and others to devise schemes to upend the vote as part of a “command center” of Trump allies holed up in the Willard Hotel ahead of the Jan. 6 riot.

Some challenges to electoral votes pressed by  “coup memo” attorney John Eastman — who was also part of the “command center” to stop the election — appear to echo strategies in the PowerPoint plan.

Meadows exposed the PowerPoint scheme in a trove of documents he provided to the House select committee investigating the Jan. 6 insurrection.

Bennie Thompson (D-Miss.), chair of the House select committee, referred to elements of that plan and others as part of a “direct and collateral attack” by Trump allies after the election.

Meadows’ lawyer said the former chief of staff did not act on the plan or otherwise do anything about the email, according to The New York Times.

Under the PowerPoint plan, Trump was to declare a national emergency, citing foreign “control” of electronic voting systems, and then all electronic voting would be rendered invalid. Then-Vice President Mike Pence was to install Republican electors in states where Trump allies would baselessly declare that “fraud occurred,” according to the maneuvers outlined in the plan.

Waldron told the Post that he was largely responsible for the foreign control angle of the strategy.

Meadows reversed an earlier promise to cooperate with the House committee, even though he himself appears to be breaching the executive privilege he claims by widely discussing what led up to Jan. 6, even writing a book that includes details he now refuses to discuss with investigators.

He also appears to have played a role in exactly what investigators are examining.

Slime and deceit are all over Trump, Meadows and others for the January 6th insurrection.