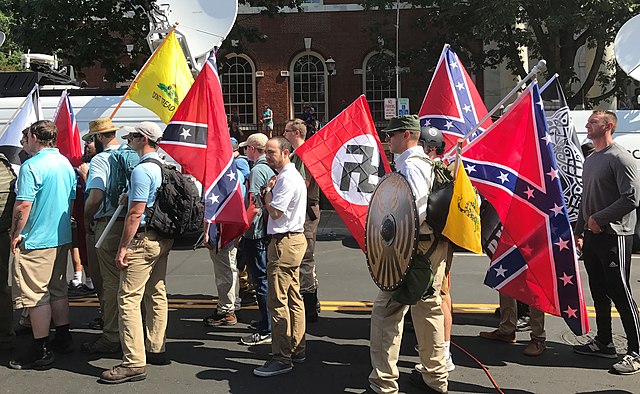 Yesterday, jurors found the main organizers of a deadly far-right rally in Charlottesville, Va., in 2017 liable under state law, awarding more than $25 million in damages to counter protesters, but deadlocked on federal conspiracy charges.

The verdict was a clear rebuke of the defendants — a mix of white nationalists, neo-Nazis and Confederate sympathizers. They were found under Virginia law to have engaged in a conspiracy that led to injuries during the rally. The “Unite the Right” march began as a demonstration over the removal of a Confederate statue and led to the death of the counter-protester Heather Heyer, 32, when she was struck by a car driven by one of the defendants.

The civil suit, heard in U.S. District Court in Charlottesville, was filed by four men and five women, including four of the people who were injured when Ms. Heyer was killed. The plaintiffs, whose injuries included concussions and a shattered leg, testified that they suffered from post-traumatic stress disorder, insomnia, the inability to concentrate, flashbacks and panic attacks.

All sought compensatory and unspecified punitive damages, including payment for medical costs as well as $3 million to $10 million for pain and suffering depending on the degree of their injuries.

The most prominent defendants included Richard Spencer, once seen as the leader of the alt-right in the United States; Jason Kessler, who organized the event; and Christopher Cantwell, a vocal neo-Nazi podcaster who is already serving 41 months in federal prison in a separate threats and extortion case.  As reported by The New York Times and other media.

“The counter-protesters’ lawyers said that they were considering pursuing a retrial on the federal conspiracy claim. However, the verdict that was returned achieved the same ends in holding the rally’s organizers responsible for violence motivated by racial, religious or ethnic animosity, they said.

“Each and every one of them was found to be part of a conspiracy, and these award damage numbers send a message,” said Karen L. Dunn, one of the lead lawyers for the plaintiffs.

The largest sums were awarded for punitive damages, with 12 individuals ordered to pay $500,000 apiece while five white nationalist organizations were assessed $1 million each. Any punitive damages paid will be divided evenly among the plaintiffs.

James Fields, already serving multiple life sentences for murdering the counter-protester with his car, was found liable for $12 million in punitive damages, as well as hundreds of thousands of dollars for medical expenses stemming from assault, battery and emotional distress.

Lawyers for the far-right organizers said they would seek to reduce those amounts, and there was little chance that their clients could pay in any event. “The defendants in this case are destitute, none of them have any money,” said Joshua Smith, who represented Matthew Heimbach, Matthew Parrott and the Traditionalist Worker Party, modeled on Germany’s Nazi Party.

Mr. Smith sought to portray the decision as a victory for his clients, saying that the lawyers for the other side had expected to “waltz through” the case. A small group of protesters shouted “Get out of town!” at him as he stepped up to address reporters outside the federal courthouse.

Legal experts, however, said that the jury’s decision came down heavily on the side of the plaintiffs. “Though there is some ambiguity in the verdict, the bottom line is that the jury found for the plaintiffs and awarded significant compensatory and punitive damages,” said Richard C. Schragger, a professor at the University of Virginia Law School who had been following the case closely. Mr. Schragger said the outstanding question was why the jury found a racial conspiracy to commit violence under state law but deadlocked over a similar provision of federal law.

He and others noted the explanation of the federal statute in the instructions received by the jury was slightly more complex, including references to constitutional amendments and civil rights.

The lawyers for the counter-protesters said that in addition to holding march organizers responsible for the violence, they hoped to deter hate groups from mounting similar toxic spectacles in the future, relying on civil suits in the absence of decisive action by the criminal justice system.

The federal charges related to whether the rally organizers had engaged in a race-based violent conspiracy, which is illegal under an 1871 federal law known as the Ku Klux Klan Act that was designed to prevent vigilantes from denying newly freed slaves their civil rights.

Many of them readily admitted to their racial animosity, but said they were exercising their First Amendment rights with a legal permit for the rally, not participating in a conspiracy to commit violence. They blamed the violence entirely on Mr. Fields, the demonstrator who mowed down counter-protesters with his car.

The jury was asked to decide whether each of the defendants had engaged in a conspiracy, and, if so, what compensation should be paid to the nine people suing them.

The jury began deliberating on Friday. The 77 pages of instructions from the judge explained how engaging in a conspiracy did not require all participants to forge an agreement or meet in the same room, or even to know one another. Nor did a conspiracy require the participants to have caused the violence themselves. The main point was that they all shared an objective and could foresee the violence that occurred.

The plaintiffs drew a line from Mr. Fields through all the organizations that participated, linking him first to Vanguard America, the group that he marched with in Charlottesville, and then to the other organizations and their leaders. Lawyers for the far-right protesters argued that it was just online chatter that did not amount to strong ties between them, much less a conspiracy. None of the other defendants knew Mr. Fields beforehand, they said, and he was not involved in organizing the event.

The four-week trial, long delayed because of the coronavirus pandemic, underscored how much the rally organizers and their groups were already sidelined, squabbling among themselves and financially strapped in the wake of the violent debacle in Charlottesville. Mr. Spencer, who defended himself during the trial, described the case in 2020 as “financially crippling.” Seven defendants ignored the proceedings. Their cases will be addressed separately by the court.

If many far-right players have been shunted aside, the ideology has not been. In recent decades, whenever far-right groups have lost in court, the movement has rebounded.

“While some of the messengers have been eviscerated, the more mainstream versions of their hatemongering continue to have real currency, with broad exposure guaranteeing that the violence of the far-right fringes will unfortunately continue,” said Brian Levin, the director of the Center for the Study of Hate and Extremism at California State University, San Bernardino.

In seeking to prove that the violence was foreseeable, the plaintiffs highlighted how often the idea of hitting protesters with cars came up beforehand.

Samantha Froelich, who was dating two of the main organizers simultaneously in the lead-up to the rally, but who has since left the movement, testified that hitting protesters with cars was discussed at a party earlier that summer in the “Fash Loft,” short for fascist, the nickname for Mr. Spencer’s apartment in Alexandria, Va.

After the violence, Mr. Parrott, whose Traditionalist Worker Party has since disbanded, and the others celebrated. “Charlottesville was a tremendous victory,” he said in a post. “The alt-right is not a pathetic and faceless internet fad, but a fearsome street-fighting force.” 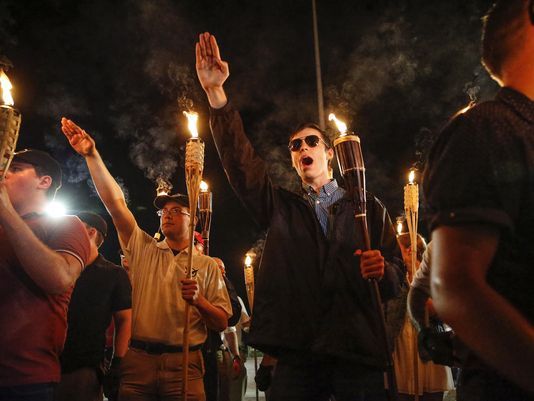 While the plaintiffs’ case took three weeks and 36 witnesses, the defendants rested after a day and a half, having made four broad arguments. First, they argued that while others might deplore their views, the First Amendment allowed them. Second, that they acted in self-defense. Third, that the police were to blame for not keeping the opposing sides apart. Fourth, that none of them could anticipate what Mr. Fields did because none knew him.

The trial brought to life the hatred and anger espoused by the far-right groups, especially on the streets of Charlottesville. A torch-lit march on the eve of the rally, with hundreds of men chanting racist slogans, evoked Ku Klux Klan and Nazi marches. The testimony as well as the many videos and social media posts introduced were awash in the iconography of hate, with Nazi symbols and stiff-armed salutes, with admiration for Hitler and claims that nonwhite races were inferior.

Supporters of the far-right maintained a cheering section online full of expletive-laced rants against Black and Jewish people, while the defendants themselves weighed in with commentary. In an online interview, Michael Hill, 69, president of the League of the South, which seeks to establish a white ethno-state, called the courtroom a “front line” in the battle.

While testifying, Mr. Hill was asked to read part of a pledge that he had posted online. “I pledge to be a white supremacist, racist, antisemite, homophobe, a xenophobe, an Islamophobe and any other sort of phobe that benefits my people, so help me God,” he read with apparent enthusiasm. He added: “I still hold those views.”

Lawyers for the white supremacists had argued that such messages of hate were not enough to prove the plaintiffs’ case.

“They’ve proven to you that the alt-right is the alt-right — they are racists; they are antisemites,” James Kolenich, one of the defense lawyers, said in closing arguments. “But what does that do to prove a conspiracy?”

The lawyers for the plaintiffs said that the verdict was a condemnation of what happened in 2017 in Charlottesville.

“I think this verdict is a message today that this country does not tolerate violence based on racial and religious hatred in any form, and that no one will ever bring violence to the streets of Charlottesville, Virginia, ever again,” said Roberta Kaplan, the lead attorney who organized the case through a nonprofit organization called Integrity First for America.

Congratulations to the jury in this case but I don’t think we have heard  the last of it!