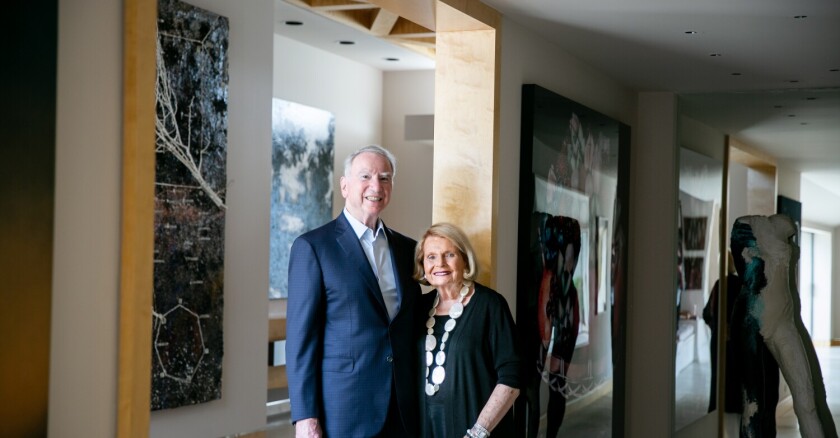 Philanthropists Irwin and Joan Jacobs, whose gifts have profoundly influenced health, science and the arts across San Diego County for decades, are giving the Salk Institute $100 million to help build a major center for science and technology.

The gift is the largest in the La Jolla institute’s history and represents the focal point of a $500 million fundraising campaign to expand the campus and deepen research in areas such as cancer, plant biology, aging and neurodegenerative diseases.  As reported by the San Diego Union-Tribune.

The Salk Institute specializes in basic science. But it has begun to do more to help translate its findings into therapeutic drugs and to work on practical ways to fight climate change, such as developing plants that absorb greater amounts of carbon dioxide.

As part of the change, the institute has been heavily investing in computational biology, a field where the ever-growing ability to analyze massive data sets enabled scientists to quickly determine the genetic makeup of the various strains of COVID-19.

The Jacobs gift is a timely one “because the faculty are working together on larger problems with deep implications,” said Salk President Fred “Rusty” Gage, who shook science in the 1990s when he discovered that adult humans can generate new brain cells.

His finding helped deepen science’s understanding of Parkinson’s and Alzheimer’s diseases.The $100 million gift from Irwin Jacobs — who co-founded San Diego chipmaker Qualcomm — and his wife represents the latest in a long list of donations.

The couple made a splash in 2002 when they donated $100 million to help the San Diego Symphony, which was experiencing serious financial problems.

The following year, they gave the University of California San Diego $110 million to support its engineering school, helping make it one of the largest programs of its kind in the western U.S. Their total contribution to the campus exceeds $300 million and helped create the Jacobs Medical Center, a key piece of UC San Diego Health.

The Jacobses also have a close relationship with the Salk, where Irwin, who is now 88, has served on the board of trustees since 2004. He became chairman two years later and helped the institute deal with financial challenges during his decade-long tenure. He’s still on the board.

“Joan and I continue to expand our family tradition of supporting effective nonprofit institutions with the potential to positively impact many lives,” Irwin Jacobs said in a statement.

“We focus on projects that have well-defined goals and good leadership, and Salk is exemplary in both ways,” he added. “We strongly advocate expanded philanthropy in support of basic science and engineering.”

Under the terms of the new donation, the Jacobses will donate $1 for every $2 raised by the Salk during a period that will end on June 30, 2022. The couple will donate up to $100 million.

The institute’s overall fundraising campaign needs to raise at least $250 million to construct the science and technology center, a 100,000-square-foot building that will be located on the eastern edge of the Salk campus, along North Torrey Pines Road. Construction could begin late next fall.

An additional $250 million is being sought for a variety of scientific endeavors and to increase the number of active faculty members from 50 to 55.

The Salk has issued conceptual drawings showing what the new science and technology center will look like. But the project is likely to be watched closely by the architectural community to see if there are significant deviations from the overall look of the Salk, whose seaside laboratory buildings and travertine marble courtyard are considered to be a masterpiece in design.

The institute was founded by Jonas Salk, who developed the first successful vaccine to fight polio in the 1950s.

He loved the labs so much he used to dreamily glide his fingertips across the exterior walls during his daily walks around campus.

The institute later built another complex, known as East Building, which didn’t cause much of a stir.

Gage told The San Diego Union-Tribune that the new center will be composed of teak, steel and concrete, just like the original buildings, and that it will feature lab space, offices and breezy meeting areas.

The new center, said Gage, “builds on the legacy of Jonas Salk and will advance scientific discovery at Salk for decades to come.”

Much is at stake, said Salk plant biologist Joanne Chory,who is working on ways to get plants to sequester greater amounts of carbon.

“We’re facing big, complex problems because there are so many people living on Earth,” Chory said. “Science is going to have to solve them or humans will not inhabit the Earth any more.”

We appreciate good citizens like Irwin and Joan Jacobs willing to help fund the work of enterprises such as the Salk Institute!