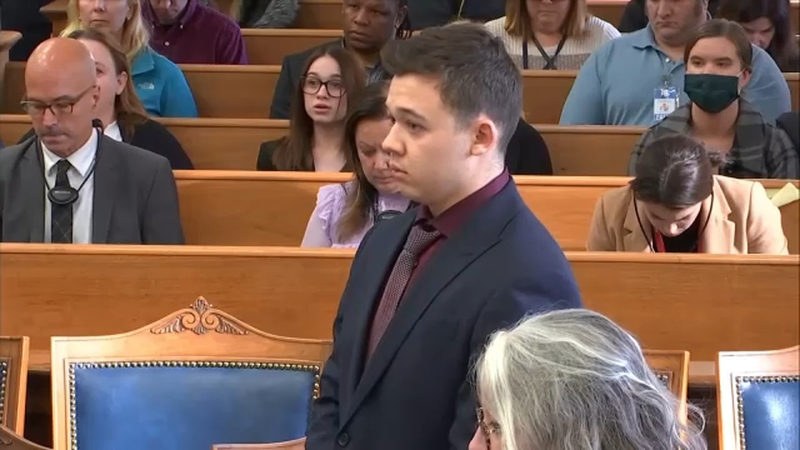 The “not guilty” verdict yesterday in the trial of Kyle Rittenhouse elicited a wide range of reactions from Americans, many falling along partisan lines, with conservatives celebrating and liberals venting their frustrations.

The five felony counts against Rittenhouse stemmed from the 2020 shootings that left two people dead and another severely injured during chaotic protests against racial injustice in Kenosha, Wis. Rittenhouse was 17 when he carried an AR-style semiautomatic rifle on the streets of Kenosha and opened fire on demonstrators, killing Joseph Rosenbaum and Anthony Huber and seriously wounding Gaige Grosskreutz.

While many liberals expressed outrage at the verdict, President Biden sought to calm those emotions.

“Well look, I stand by what the jury has concluded,” Biden said Friday afternoon on the White House lawn. “The jury system works and we have to abide by it.”

In a longer statement released minutes later, the president acknowledged that “the verdict in Kenosha will leave many Americans feeling angry and concerned, myself included,” but urged “everyone to express their views peacefully, consistent with the rule of law.”

“Violence and destruction of property have no place in our democracy,” Biden’s statement continued. “The White House and Federal authorities have been in contact with Governor Evers’s office to prepare for any outcome in this case, and I have spoken with the Governor this afternoon and offered support and any assistance needed to ensure public safety.”

Below are more reactions from those close to the trial, politicians and advocacy groups.

Family of Anthony Huber, who was killed by Rittenhouse

We are heartbroken and angry that Kyle Rittenhouse was acquitted in his criminal trial for the murder of our son Anthony Huber. There was no justice today for Anthony, or for Mr. Rittenhouse’s other victims, Joseph Rosenbaum and Gaige Grosskreutz.

We did not attend the trial because we could not bear to sit in a courtroom and repeatedly watch videos of our son’s murder, and because we have been subjected to many hurtful and nasty comments in the past year. But we watched the trial closely, hoping it would bring us closure.

That did not happen. Today’s verdict means there is no accountability for the person who murdered our son. It sends the unacceptable message that armed civilians can show up in any town, incite violence, and then use the danger they have created to justify shooting people in the street. We hope that decent people will join us in forcefully rejecting that message and demanding more of our laws, our officials, and our justice system.

Make no mistake: our fight to hold those responsible for Anthony’s death accountable continues in full force. Neither Mr. Rittenhouse nor the Kenosha police who authorized his bloody rampage will escape justice. Anthony will have his day in court.

No reasonable person viewing all of the evidence could conclude that Mr. Rittenhouse acted in self-defense. In response to racist and violent calls to action from militia members, Mr. Rittenhouse travelled to Kenosha illegally armed with an assault rifle. He menaced fellow citizens in the street. Though he was in open violation of a curfew order, Kenosha police encouraged him to act violently. Kenosha police told militia members that they would push peaceful protestors toward the militia so that the militia could “deal with them.” Soon after, Mr. Rittenhouse killed Joseph Rosenbaum. The police did nothing. Concerned citizens, confronted with a person shooting indiscriminately on the street, stepped in to stop the violence. Anthony was shot in the chest trying to disarm Mr. Rittenhouse and stop his shooting spree. Still, the police did nothing. Mr. Rittenhouse continued to shoot, maiming Gaige Grosskreutz. The police let Mr. Rittenhouse leave the scene freely. Mr. Rittenhouse came to Kenosha armed to kill. Kenosha police encouraged him to act violently, and our son is dead as a result.

We are so proud of Anthony, and we love him so much. He is a hero who sacrificed his own life to protect other innocent civilians. We ask that you remember Anthony and keep him in your prayers.

“We are all so very happy that Kyle can live his life as a free and innocent man, but in this whole situation there are no winners, there are two people who lost their lives and that’s not lost on us at all,”

No verdict will be able to bring back the lives of Anthony Huber and Joseph Rosenbaum, or heal Gaige Grosskreutz’s injuries, just as no verdict can heal the wounds or trauma experienced by Jacob Blake and his family. No ruling today changes our reality in Wisconsin that we have work to do toward equity, accountability, and justice that communities across our state are demanding and deserve.

We must move forward, together, more united and more motivated to build the sort of future we want for our state — one that is just, one that is equitable, and one where every person has the resources and opportunity to thrive — and I will not stop working to achieve that vision.

Over the last few weeks, many dreaded the outcome we just witnessed. The presumption of innocence until proven guilty is what we should expect from our judicial system, but that standard is not always applied equally. We have seen so many black and brown youth killed, only to be put on trial posthumously, while the innocence of Kyle Rittenhouse was virtually demanded by the judge.

I believe justice has been served in the Kyle Rittenhouse trial. I hope everyone can accept the verdict, remain peaceful, and let the community of Kenosha heal and rebuild.

All of us who knew what actually happened in Kenosha last year assumed this would be the verdict. Thankfully, the jury thought the same. Pray that the kind of violence seen then does not happen again. And pray for the jurors that they too might be safe from violence.

Today’s unanimous verdict may be shocking for some but for many others, it is proof that our justice system works. The right to a trial by a jury of your peers is a fundamental part of the checks and balances in our country.

Let’s hope politicians and activists who disagree with the verdict don’t use this as an opportunity to sew more division and destruction in our community. For those disappointed in the outcome, I urge peace and unity over violence and destruction.

The verdict in the Kyle Rittenhouse case is a travesty and fails to deliver justice on behalf of those who lost their lives as they peacefully assembled to protest against police brutality and violence. Rittenhouse’s decision to go to Kenosha and provoke protestors was unwarranted. Moreover, the outcome of this case sets a dangerous precedent. We have seen this same outcome time and time again; a justice system that presents different outcomes based on the race of the accused. This verdict is a reminder of the treacherous role that white supremacy and privilege play within our justice system. In the midst of this disappointing verdict, we must continue to work to ensure that those who seek to harm progress do not find refuge for their illicit acts in a system meant to protect victims.

Kyle Rittenhouse is not guilty, my friends. You have a right to defend yourselves. Be armed, be dangerous and be moral.

March for Our Lives

Two people are dead, one injured. And yet, Kyle Rittenhouse will walk away without any consequences. This trial lays bare everything we’ve been talking about for years. It is so very clear that Kyle Rittenhouse embodies the very danger posed by a toxic mix of a white supremacist culture that values property over human life, and wide proliferation of high-powered guns with fewer limits than a drivers license. This deadly culture ensnared Kyle Rittenhouse and his three victims. One thing is clear: Young people are enraged watching this trial, and we refuse to accept this as our normal.

Let’s be clear: firearms bring violence, they don’t ever stop it. This case proves it once again. We shouldn’t forget the very reason Kyle Rittenhouse was in Kenosha that day — because a young Black man, Jacob Blake, was shot by the police over a traffic stop. People showed up to demand justice for Jacob Blake, and to express anger at what could have easily turned into yet another tragic death at the hands of the police. Kyle Rittenhouse came to exploit tragedy. He embodies the very danger posed by an armed white supremacist culture. Once again, from start to finish, adults have failed us. We can no longer afford this failure.

I don’t think we have heard the last of Rittenhouse and the events in Kenosha!