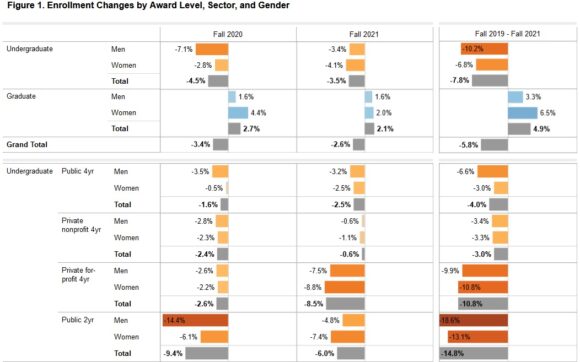 Undergraduate attendance has dropped 3.5 percent compared with a year earlier. Since fall 2019, undergraduate enrollment has declined nearly 8 percent.  As reported by The Chronicle of Higher Education.

Every sector felt the shortage of undergraduate students, some more sharply than others. The decline at private for-profit four-year institutions was the worst, with an enrollment drop of 8.5 percent compared with a 2.6-percent drop last fall.

At primarily online colleges, which were defined as institutions where nearly all students attended classes online before the pandemic began, undergraduate attendance fell 8.9 percent — a reversal of the growth such institutions saw last fall.

The new data, which reflect enrollments as of October 21, represent 13.7 million students at 74 percent of the 3,600 institutions that report to the center.

These data are not a surprise.  In fact, I thought the enrollment drop would be greater!