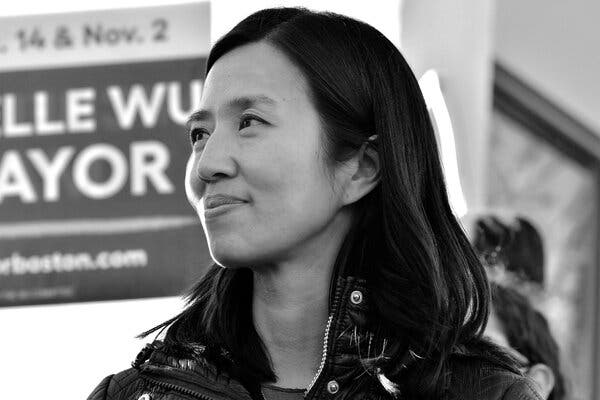 Journalist and writer, Eileen McNamara, had a guest essay in The New York Times over the weekend entitled, “Michelle Wu Proved That Boston Isn’t the Same Old Boston Anymore.”  Her essay focuses on how the ethnic politics of Boston has shifted at least for the time-being. She comments:

“The election of Ms. Wu, a 36-year-old lawyer, represents a seismic shift to a political landscape in which “white” and “male” were prerequisites to be elected mayor since the position was established here in 1822. Ms. Wu will join at least 11 women (and possibly 13, depending on election results) as mayors of U.S. cities with a population of more than 400,000.

It’s a long way from the Irish domination of the mayoralty that began in 1884 with the election of Hugh O’Brien, a native of County Cork. The office was held without interruption by men of Irish descent from 1930 to 1993, when Thomas Menino became the first Italian American to claim the job.”

The 2021 election was most interesting in many parts of the country in terms of the diversity of candidates, many of whom were winners.

Ms. McNamara’s entire essay is below.

Time to retire the tired old tropes about Brahmin swells, Irish ward heelers and the petty parochialism that for too long has defined this city on the national stage. A Taiwanese American woman from Chicago is about to become the mayor of Boston, a town that, until Tuesday, had elected only white men to that office.

Michelle Wu defeated Annissa Essaibi George, a City Council colleague whose father is from Tunisia and mother was born to Polish parents in a German refugee camp.

The election of Ms. Wu, a 36-year-old lawyer, represents a seismic shift to a political landscape in which “white” and “male” were prerequisites to be elected mayor since the position was established here in 1822. Ms. Wu will join at least 11 women (and possibly 13, depending on election results) as mayors of U.S. cities with a population of more than 400,000.

Ms. Wu and Ms. Essaibi George, both Democrats, emerged in September as the top vote-getters in the nonpartisan preliminary election, which included not a single white man among the five candidates. By winning the runoff on Tuesday, Ms. Wu will succeed acting Mayor Kim Janey, who in March became the first Black Bostonian and first woman to occupy the position, after Marty Walsh stepped down to join the Biden administration as secretary of labor.

It’s a long way from the Irish domination of the mayoralty that began in 1884 with the election of Hugh O’Brien, a native of County Cork. The office was held without interruption by men of Irish descent from 1930 to 1993, when Thomas Menino became the first Italian American to claim the job.

That was almost 30 years ago, but like most caricatures of this city, the idea of Boston as more Irish than Guinness stout retains a stubborn hold on the national imagination. In fact, Boston has been a majority-minority city since the turn of this century, when census figures first confirmed the percentage of non-Hispanic whites had dropped below 50 percent (to 49.5 percent). The latest census data shows the city becoming even more diverse, with the proportion of Asian, Hispanic and multiracial residents on the rise.

That reality stands in stark contrast to images of Boston that are seared into memory — white women in housecoats and hair curlers throwing rocks at school buses full of Black children, and a white teenage thug assaulting a Black lawyer with an American flag on City Hall Plaza during a demonstration against a federal court order to desegregate the public schools through busing. Those photographs are more than 40 years old, but their power to define the city as insular and racist remains undiminished.

To be sure, the legacy of that era lives on in a public school system abandoned by those opposed to integration, leaving behind a student population that today is only 14 percent white. Under Mayor Ray Flynn, control of the chronically underperforming schools shifted in 1991 from an elected school committee to a panel chosen by the mayor, a change many denounced as a move that disenfranchised minority parents. A nonbinding question on the city ballot Tuesday asked whether voters should again be allowed to elect its school committee, as voters do in every other city and town in Massachusetts. (It looked poised to pass.) Ms. Wu supports a hybrid model with a majority of the committee elected by voters and a number of experts appointed by the mayor.

It is a measure of how much Boston has changed that Ms. Essaibi George, who grew up in the city’s Dorchester neighborhood and taught in the public schools, failed in her bid to brand the Chicago-born Ms. Wu as an outsider. Ms. Wu first came to Massachusetts to attend Harvard. A Suffolk University/Boston Globe/NBC 10 poll last month found that 59 percent of likely voters said it did not matter to them whether a candidate was Boston born and reared.

The election of an Asian American woman will not erase the high cost of housing, the rise in crime or the racial disparities in education, wealth and medical outcomes that persist here, as they do in most major American cities. But Ms. Wu comes to the job with bold plans to address gentrification and climate change and to reform the police, many inspired by her former Harvard Law School professor and mentor Senator Elizabeth Warren. Some of those ideas Ms. Wu cannot adopt unilaterally. Her proposal to reintroduce rent control, outlawed statewide by a ballot initiative in 1994, would require the approval of the State Legislature and Gov. Charlie Baker, who would most likely oppose it.

And, for all the hype about the historic nature of this race — two women of color vying for mayor in a city whose politics have been long dominated by white men — public interest in the campaign was anemic at best. Many Bostonians sat out the election, with turnout not expected to top 30 percent of the city’s 442,000 registered voters.

Ms. Wu should not be misled. Those stay-at-home voters will be paying close attention when she takes the oath of office in two weeks. Politics in Boston might just have gotten more diverse, but it is still this city’s favorite spectator sport.