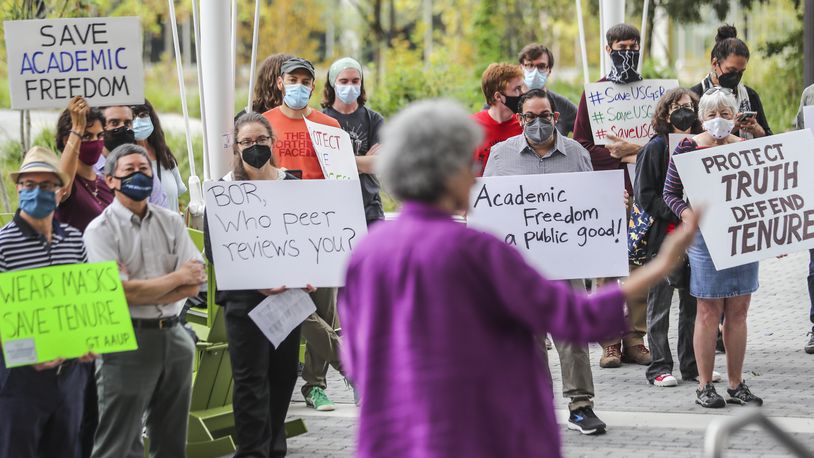 The University System of Georgia regents yesterday approved changes in the board’s post-tenure review policy that Georgia faculty members and the American Association of University Professors have criticized as a hobbling of tenure.

Before the vote, professors around the state called on the Board of Regents to table the issue. Concerned instructors and students chanted, “Hands off tenure!” at a Tuesday protest outside a two-day meeting of the governing board. The AAUP issued a statement on Tuesday saying if the revisions were approved, tenure and academic freedom would be “severely compromised.” Given “the severity and scope of this potential attack,” the organization’s executive director would authorize an investigation if the changes were ratified, the statement said.  As reported by The Chronicle of Higher Education.

“Some observers have characterized the changes as eliminating tenure at the state’s public colleges — the university professors’ group tweeted in advance of the vote that the new language would “end tenure.”

It’s not quite that simple. The alterations center on the process of post-tenure review. The revisions may very well weaken tenured professors’ job security, though to what degree is not immediately clear. (The policy changes leave room for campuses to write their own rules to conform with the board’s language, with guidance from the system chancellor or a designate. A system official declined to make Tristan Denley, the system’s chief academic officer, available for an interview.)

Under the former framework, tenured faculty members went through post-tenure review every five years. If there were “deficiencies” identified, that faculty member worked with a supervisor to develop a plan with desired outcomes, a timetable, and a “monitoring strategy.” If after three years the faculty member had not improved in the identified areas, that person could be fired for cause. That dismissal process was governed by the regents’ dismissal policy, which outlines specific procedures that must be followed. Among those procedures are that a tenured professor facing termination has the right to a hearing before a faculty committee made up of three to five impartial faculty members, chosen by the executive committee of the highest faculty legislative body.

Under the new policy, if, during a tenured faculty member’s annual review, that person’s performance is deemed unsatisfactory or not meeting expectations for two years in a row, that faculty member is required to go through a “corrective post-tenure review.”

While it cannot be said to do away with tenure entirely, it certainly moves in that direction.

The policy doesn’t define this term but says if the results of a post-tenure review are unfavorable, then the department chair and dean, in consultation with the faculty member, will create a performance-improvement plan.

Should the professor fail to make sufficient progress or refuse to “engage reasonably in the process,” as determined “by the department chair and dean after considering feedback from the committee of faculty colleagues,” the new policy states, then the college shall take appropriate remedial action, like a pay suspension, a revocation of tenure, or termination. The college president makes the final call.

The system’s 25 tenure-granting institutions must create their own policies for carrying out the system’s new post-tenure review policy, and said policies “shall be developed in consultation with the institution’s faculty and shall include appropriate due-process mechanisms,” the new language says. Campus-level policies must be approved by the system chancellor or a designate. The chancellor or a designate will also provide colleges with “more specific guidelines” for their post-tenure-review policies.

System leaders have defended the policy adjustments, saying they came after a working group thoroughly reviewed what was and was not working in the post-tenure-review process systemwide. That working group was asked to recommend policy and practice updates “to ensure all faculty remain productive throughout their careers.” The goal of the changes they recommended, wrote Lance Wallace, associate vice chancellor for communications, in an email, is “to support career development for all faculty, as well as ensure accountability and continued strong performance from faculty members after they have achieved tenure.”

Faculty critics say proper due process is anything but guaranteed. That’s because before Wednesday, the way in which tenured professors who had undergone post-tenure review and not shown improvement could be fired was set in stone, thanks to a systemwide discipline policy that closely mirrors what the national AAUP recommends. Now, the new policy says, such action can be taken “in accordance with the guidelines provided by the chancellor or the chancellor’s designee(s), as well as the institution’s post-tenure-review policies.” That opens the door, these faculty members say, to firing faculty members through post-tenure review in a way that skirts existing due-process protections.

In September, Gregory F. Scholtz, director of the AAUP’s department of academic freedom, tenure, and governance, pointed out that disciplinary sanctions would no longer fall under the existing dismissal policy. “While it cannot be said to do away with tenure entirely,” he wrote in a letter outlining concerns, “it certainly moves in that direction by making it possible to dismiss a tenured faculty member — without affordance of academic due process — for failing to fulfill the terms of an imposed performance improvement plan, as determined by an administrator, not a body of peers.”

Tenure is an indefinite appointment “terminable only for cause as demonstrated in a hearing before an elected faculty body, with the burden of proof resting with the administration,” Scholtz continued. Tenure without those procedural protections “is tenure in name only.”

Professors have objected to other aspects of the new policy, like that it adds “student success” as a benchmark on which faculty members will be evaluated. Faculty members have pressed for clarity on how, exactly, “student success” will be gauged, and why it’s necessary to add another category to the traditional teaching, research, and service. In evaluations, professors already report many things they do to help students beyond instruction in the classroom, said Heather Pincock, an associate professor of conflict management at Kennesaw State University and a member of United Campus Workers of Georgia, the union that mounted Tuesday’s protest.

In an email, Wallace said that adding student success “recognizes ways in which faculty deepen student learning and engagement through activities both inside and outside the classroom.” As has always been the case, each institution must establish “clear and transparent assessment of all criteria in ways fitting to their mission and values. The development of the new student success criteria will be no different,” he said.

The new procedure “involves review by a body of peers both at the beginning and at the end of the process, and provides for appeal.”

Matthew Boedy, president of the Georgia Conference of the AAUP, wonders why regents want to make these changes. His assumption: The board thinks tenure is too easy to get and too easy to keep. Among the policy changes is that regents — though they’ve delegated authority for tenure decisions to college presidents — can now take that authority back if a college’s “faculty-review process” is not being carried out “in a sufficiently rigorous manner” until the college’s processes have been fixed. (Regents did not discuss the new policy language at the Wednesday public meeting.)

As faculty concerns mounted, Boedy, an associate professor of rhetoric and composition at the University of North Georgia, relayed them to Teresa MacCartney, the acting system chancellor. MacCartney, in response, defended the policy changes. They grew out of a post-tenure-review working group that the previous chancellor formed last year, she wrote in an October letter to Boedy. That group, which included faculty members, collected information from all tenure-granting colleges and surveyed faculty members and administrators.

Data the group assembled shows that the vast majority — 96 percent — of post-tenure reviews conducted in the past five years at 22 institutions were positive, meaning no development plan was needed. Of those who had to submit a plan, 39 percent were successful at remediation, though that percentage does not include the many plans counted as in progress. The working group concluded, among other things, that in its current form, “very few low-performing faculty members are identified and remediated during the PTR process.”

The new procedure, MacCartney wrote, “involves review by a body of peers both at the beginning and at the end of the process, and provides for appeal.”

Boedy was unmoved. The post-tenure-review process and tenure due process are not “remotely the same,” he wrote in reply.

“While you point out the obvious, that indeed the PTR process will be not under the umbrella of the dismissal-for-cause policy, you don’t state why that is necessary,” he wrote. And that move by the Board of Regents to remove post-tenure review from the tenure due process “is where tenure dies.”