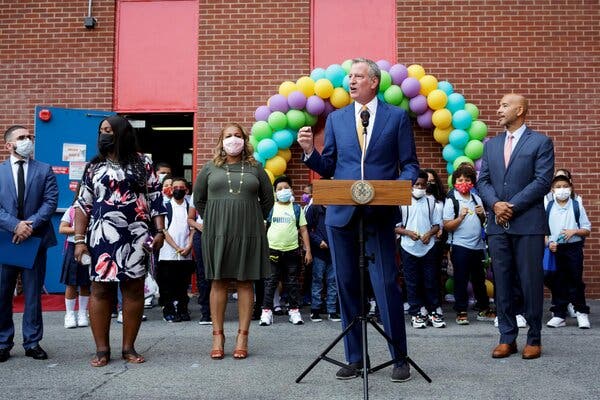 Mayor Bill de Blasio will overhaul New York City’s highly selective, racially segregated gifted and talented education classes, a sea change for the nation’s largest public school system that may amount to the mayor’s most significant act in the waning months of his tenure.

The elementary school gifted and talented program that New York has known for the last several decades will no longer exist for incoming kindergarten students next fall, and within a few years, it will be eliminated completely.  As reported by The New York Times.

“Students who are currently enrolled in gifted classes will become the final cohort in the existing system, which will be replaced by a program that offers accelerated learning to all students in the later years of elementary school.

The gradual elimination of the existing program will remove a major component of what many consider to be the city’s two-tiered education system, in which one relatively small, largely white and Asian American group of students gain access to the highest-performing schools, while many Black and Latino children remain in schools that are struggling.

New York, home to one of the most racially segregated school systems in the country, is more reliant on selective school admissions than any other large system in America.

The move represents one of Mr. de Blasio’s most dramatic actions to combat segregation in city schools, though it also puts New York more in line with how other cities are approaching their own segregated gifted classes. About 75 percent of the roughly 16,000 students in gifted elementary school classes in New York are white or Asian American. Those groups make up about 25 percent of the overall school system.

Though the mayor has long promised to tackle inequality in city schools, he has been criticized by some for not taking more forceful action on desegregation until the end of his mayoralty. His schools chancellor, Meisha Porter, who was appointed this year, has been instrumental in pushing him to fundamentally alter the gifted and talented program, according to people with knowledge of the last several months of intensive negotiations on the issue.

The change also presents an unwelcome challenge for Mr. de Blasio’s almost certain successor, Eric Adams, the Democratic nominee for mayor, who would have to implement an entirely new gifted education system during his first year in office.

Mr. Adams has expressed skepticism about overhauling the gifted system and has said he wants to offer more gifted programs in low-income neighborhoods. While the next mayor could technically reverse Mr. de Blasio’s plan, doing so would be logistically complex for a new administration and could cause confusion among parents. It is still possible that the next mayor could make adjustments to the plan.

Barring any dramatic moves by the incoming administration, New York City will no longer admit rising kindergarten students into separate gifted classes or schools starting next fall. Instead, the city will train all its kindergarten teachers — roughly 4,000 educators — to accommodate students who need accelerated learning within their general education classrooms. The city does not yet have an estimate for how much the training will cost, though it is expected to be tens of millions of dollars.

The final group of students who are labeled gifted and talented will progress through the system over the next five years without any major changes, a significant concession on Mr. de Blasio’s part to the many parents who have expressed concern that their children’s education would be upended midway through elementary school.

But almost every other aspect of the current gifted system will change. The city will permanently eliminate a much-criticized admissions exam that sorted 4-year-olds into gifted classes before they even entered the public school system. Some parents paid for test preparation in the hopes that their toddlers would ace the exam.

The city will evaluate all rising third graders, using past work and input from their teachers, to determine whether they need higher-level instruction in specific subject areas.

But those children will no longer be separated from their peers into classrooms or schools with other students who are considered gifted. At most, students will spend a period or two of the day in small groups focusing on one subject area with specialized teachers, which is already common in many schools.

The mayor has not yet solicited feedback from parent groups or elected officials on his gifted and talented plan, which was kept under wraps for months as it was finalized. Officials said that he planned to consult with families and educators on the plan throughout October and November, and that aspects of the proposal could shift before he leaves office.

It is not yet clear, for example, what will happen to the five schools across the city that exclusively serve children considered gifted. Officials said parental input will inform their decisions on how to reshape those schools.

A well-organized group of parents who support keeping gifted classes in some form, with support from elected officials like State Senator John C. Liu, a Democrat from Queens, have criticized the mayor in recent months for preparing a new system without getting input from parents. Many of those families have children who attend school in Manhattan’s District 2, one of the city’s whitest and wealthiest school districts.

The mayor’s earlier push to eliminate the admissions exam for the city’s most elite high schools, including Stuyvesant High School, failed after he announced the plan without first seeking feedback from the many thousands of Asian American parents whose children would be most affected. Those families spent months forcefully pushing back against the plan, and their opposition ultimately helped defeat it in the State Legislature.

The mayor’s other significant action on integration, a plan announced late last year to remove some admissions requirements at competitive middle and high schools, was rolled out without significant public comment.

While changes to admissions to the city’s specialized high schools are subject to legislative approval, Mr. de Blasio has full power over all other schools, including gifted programs.

The announcement by Mr. de Blasio, who is term-limited and is actively considering running for governor next year, comes just three months before he leaves City Hall.

In recent years, a growing number of activists pushing for integration measures have focused on the city’s gifted program, which provides a particularly stark example of how children are often separated by race and class within a diverse school system.

The mayor’s plan for the future of gifted education is similar to a proposal made in 2019 by a task force he convened on school integration measures — a plan that he had, until now, mostly ignored. Friday’s announcement will be welcome news to many activists who have said the current gifted system is outdated and unfair.

Though public outcry from those advocates no doubt played some role in the mayor’s decision, more meaningful still has been nearly eight years of private pressure from the mayor’s three schools chancellors, all of whom have been skeptical of, if not completely opposed to, separate gifted classes.

The mayor’s first chancellor, Carmen Fariña, got rid of gifted classes in the Manhattan elementary school she ran for many years as a principal. The second chancellor, Richard A. Carranza, resigned earlier this year, in part because he was frustrated by what he considered the mayor’s reluctance to take bold action on gifted and talented education.

While Mr. de Blasio’s announcement represents a major shift for New York, it is hardly pioneering. Many districts around the country have already moved away from separating children by perceived academic ability, and there is wide agreement among educational experts that New York’s practice of sorting 4-year-olds into gifted classes was not supported by research.

Labeling students as gifted and plucking them out of general education classrooms altogether often exacerbates segregation, removes resources from regular public schools, and weakens instruction for all other students, experts say, when children who need special support can still receive proper attention within normal classrooms and schools.

But teaching children with a large range of abilities in one classroom is difficult, meaning much of the success of the plan will depend on the city’s approach to training educators.

Michael Mulgrew, president of the United Federation of Teachers, said he believed crucial details of the plan would be worked out by the next administration. Mr. Mulgrew, who has consistently called for the elimination of separate gifted classes for children in kindergarten through second grade, said he thought that some children in upper elementary school would still end up sorted by ability, despite the mayor’s new plan.

Mr. Mulgrew also criticized the timing of the mayor’s announcement. “It’s a little late in the game,” he said.

The City should welcome this change in policy but it is indeed a little late in de Blasio’s game.