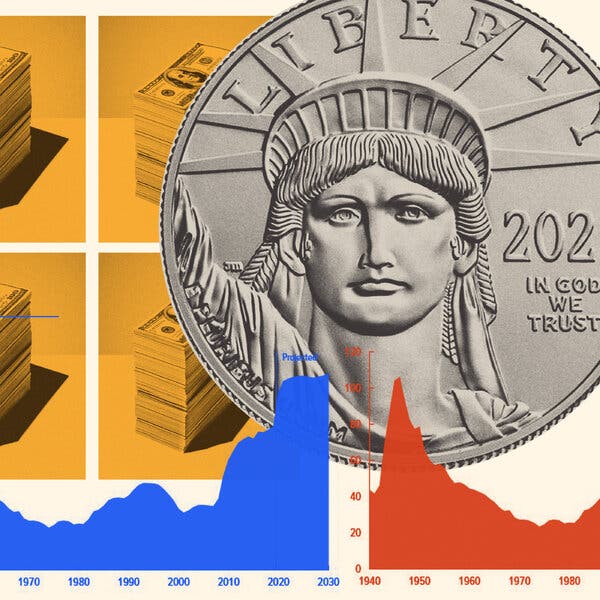 With Congress in another pitch battle between Democrats and Republicans on passing legislation to raise the US Government debt ceiling, the idea of minting a $1 trillion platinum coin that could be deposited and be used to keep paying its bills is being bandied about.  The idea may seen screwy but Peter Coy, opinion columnist for The New York Times, floats the idea which has been in and out of the news since 2011.  Coy cites prominent economists on both sides of the idea.  For example:

“Treasury Secretary Janet Yellen said on Tuesday that she wouldn’t consider the idea, calling it a “gimmick.” She’s right that the trillion-dollar coinage would require using the U.S. Mint to perform a function for which it was never intended, but that doesn’t dissuade its backers. This month my Opinion colleague Paul Krugman, a Nobel laureate in economics, wrote, “Gimmickry in the defense of sanity — and, in an important sense, democracy — is no vice.”

Below is the entire column.  Interesting reading!

What a Trillion-Dollar Coin Can Teach Us?

Now that the U.S. government is once again at risk of defaulting on its debts because of an impasse over raising the debt ceiling, we’re back to arguing over whether minting a trillion-dollar platinum coin could save the day.

For readers unfamiliar with this odd gambit: The idea is for the Treasury Department to direct the United States Mint to stamp a special coin made of platinum with a face value of $1 trillion. The Treasury Department would then deposit that coin in its account at the Federal Reserve, giving itself $1 trillion to spend. That would allow it to keep paying the bills and interest on the national debt — thus escaping default — without busting through the congressionally imposed debt ceiling.

Some people think this is an ingenious idea. Others think it’s disastrous.

Treasury Secretary Janet Yellen said on Tuesday that she wouldn’t consider the idea, calling it a “gimmick.” She’s right that the trillion-dollar coinage would require using the U.S. Mint to perform a function for which it was never intended, but that doesn’t dissuade its backers. This month my Opinion colleague Paul Krugman, a Nobel laureate in economics, wrote, “Gimmickry in the defense of sanity — and, in an important sense, democracy — is no vice.”

Here’s what I find interesting about the debate, which has been raging since at least 2011, when the idea was broached by a lawyer in Atlanta named Carlos Mucha:

You might think that the people backing this merry bit of gimmickry would be the ones casting doubt on the reality of concepts like “money” and “debt,” while opponents would be soberly testifying to the granite-like substance of those entities.

In fact, it’s frequently pretty much the opposite. The would-be coin minters seem to have more faith in the reality of money than their opponents do.

The two sides of the debate are ably laid out in a Kentucky Law Journal article, published last year, by Rohan Grey, now an assistant professor at Willamette University College of Law, who is an adherent of a deficit-friendly school of thought known as modern monetary theory.

Grey cites Neil Buchanan, an opponent of minting the coin who is an economist and law professor at the University of Florida’s Levin College of Law. Buchanan wrote in a blog post in 2013 that issuing a trillion-dollar coin would be tantamount to “pulling back the curtain on the entirely ephemeral nature of money and finance itself.”

He continued: “A monetary system simply cannot work if people do not collectively take a leap of faith. We accept currency or precious metals — which have no inherent use-value for everyday purposes — because we think that other people will accept them in turn. This group delusion allows us to say that money is money. If the delusion starts to fall apart, then there are very real, very negative effects.”

After citing a joke about the trillion-dollar coin made by the comedian Jon Stewart in 2013, Buchanan wrote, “It is no laughing matter to expose the fundamentally unreal nature of money to public ridicule.”

Grey, in contrast, argues that money is not just a confidence game whose value depends on an “infinite regress” of people trusting other people to trust it. Money has value, he says, because the government promises to accept it as payment of taxes and other obligations. (This is an argument of modern monetary theory.) Because taxes will always be with us, Grey writes, “there is little cause to worry that U.S. currency will cease to enjoy wide acceptability” if a trillion-dollar coin is minted.

To the extent that minting the coin would shake the popular belief that government spending must be funded with taxes or borrowing, rather than issuance of new money, that would be a good thing, Grey argues in his article. He writes that minting a trillion-dollar coin could be “a public teaching moment.”

You can agree with Grey or not, but it’s undeniably interesting that the opponents of minting the coin, not the backers, are the ones who call money a “group delusion.”

When I interviewed Grey on Tuesday he said: “If the only people who are qualified to have an opinion on monetary issues are people who are on the inside, or in the know, then that’s extremely dangerous for electorally accountable politics. We don’t have to be afraid of pulling back the ‘Wizard of Oz’ curtain and it all collapsing.”

I asked Buchanan about that today. He said he is worried that minting the coin could undermine public faith in money. The government’s acceptance of money to pay taxes isn’t enough to sustain its value if no one else accepts it, he said: “You don’t want to make the crisis worse by creating a stunt that makes everybody say, ‘Wait a minute, what’s going on here?’” (Buchanan says the debt ceiling statute is unconstitutional and the Treasury Department should “continue to issue normal debt in normal ways.”)

I also interviewed Michael Dorf, a professor at Cornell Law School who has collaborated with Buchanan. Said Dorf: “There are a great many noble lies on which our society rests. Not that we need to hide the truth from the public but it’s not productive to constantly remind people of the truth.” He added: “I’m sympathetic with the notion that governments oughtn’t depend on noble lies. But I also think that especially in times of economic crisis, mass psychology is unpredictable and potentially very dangerous.”

Heavy stuff, right? Minting the coin may be a gimmick, but it’s one with profound implications.