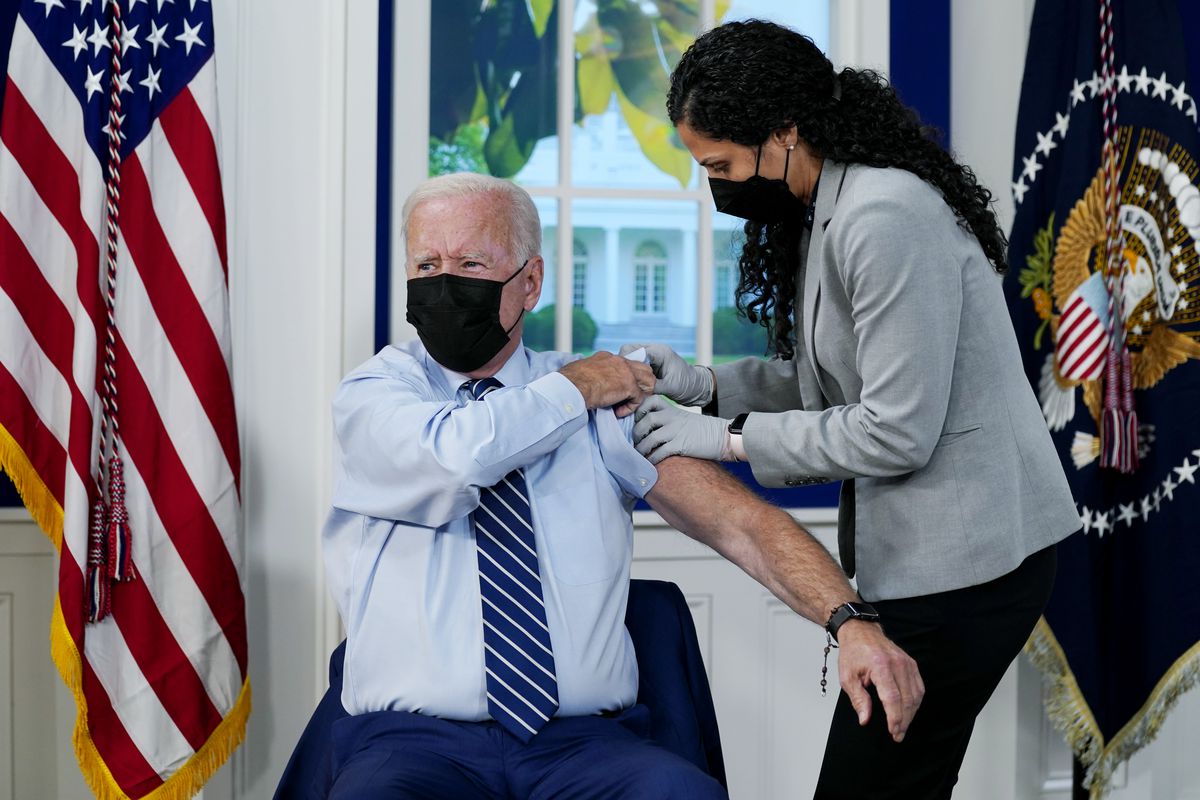 Yesterday,  78-year-old Joe Biden and 79-year-old Mitch McConnell got their booster shots.  The Democratic president and the Republican Senate leader urged Americans across the political spectrum to get vaccinated  with boosters when eligible for the extra dose of protection.

The shots, administered just hours apart on either end of Pennsylvania Avenue, came on the first workday after the Centers for Disease Control and Prevention and the Food and Drug Administration recommended a third dose of the Pfizer vaccine for Americans 65 and older and approved them for others with preexisting medical conditions and high-risk work environments.

Both leaders said that even though the booster doses provide more enduring protection against the virus, they weren’t the silver bullet to ending the pandemic.  As reported by the Associated Press.

“Boosters are important, but the most important thing we need to do is get more people vaccinated,” Biden said.

Nearly 25% of eligible Americans aged 12 and older haven’t received a single dose of the vaccines. They are bearing the brunt of a months-long surge in cases and deaths brought about by the more transmissible delta variant of the virus that has killed 688,000 in the U.S. since the pandemic began.

“Like I’ve been saying for months, these safe and effective vaccines are the way to defend ourselves and our families from this terrible virus,” said McConnell, a polio survivor.

Biden got his first shot on Dec. 21 and his second dose three weeks later, on Jan. 11, along with his wife, Jill Biden. The first lady, who is 70, received her Pfizer booster dose in private at the White House on Monday afternoon, said her spokesperson, Michael LaRosa.

Biden has championed booster doses since the summer as the U.S. experienced a sharp rise in coronavirus cases driven by the delta variant. While the vast majority of cases continue to occur among unvaccinated people, regulators pointed to evidence from Israel and early studies in the U.S. showing that protection against so-called breakthrough cases was vastly improved by a third dose of the Pfizer shot.

But the aggressive American push for boosters, before many poorer nations have been able to provide even a modicum of protection for their most vulnerable populations, has drawn the ire of the World Health Organization and some aid groups, which have called on the U.S. to pause third shots to free up supply for the global vaccination effort.

Biden said last week that the U.S. was purchasing another 500 million doses of the Pfizer vaccine — for a total of 1 billion over the coming year — to donate to less well-off nations.

Biden took questions from reporters about his vaccination experience and matters of the day as a military nurse injected the dose into his arm.

The president said he did not have side effects after his first or second shots and hoped for the same experience with his third.

Vice President Kamala Harris, 56, received the Moderna vaccine, for which federal regulators have not yet authorized boosters — but they are expected to in the coming weeks. Regulators are also expecting data soon about the safety and efficacy of a booster for the single-dose Johnson & Johnson shot.

Glad to see Biden and McConnell agree on something as important as vaccine booster shots!