The James Webb Space Telescope that is 100 times more powerful than the Hubble Telescope is scheduled to be launched on December 18, 2021. Scientists are predicting that it will change how we see the universe.  The launch, which will propel the Webb to nearly a million miles away, and will usher in a new age of astronomy and show humanity things it has never seen before. The Webb is a joint project of NASA and European Space Agency and Canada.  The new telescope is named for James Webb who headed up NASA from 1961 to 1968, was highly respected in the science community.  As reported by Vox.

“The Webb represents the culmination of decades, if not centuries, of astronomy,” says Sara Seager, a planetary scientist and astrophysicist at MIT. “We’ve been waiting for this a very long time.”

Scientists started thinking about a follow-up even before the Hubble Space Telescope launched in 1990.

The Webb was originally supposed to launch in 2010 and cost around $1 billion. Its price tag has since ballooned to $10 billion, and it’s way overdue. But the wait will be worth it, at least according to the scientists who expect new and revealing glimpses of our universe.

“We’re going right up to the edge of the observable universe with Webb,” says Caitlin Casey, an assistant professor of astronomy at the University of Texas at Austin. “And yeah, we’re excited to see what’s there.”

The Webb will surpass the Hubble in several ways. It will allow astronomers to look not only farther out in space but also further back in time: It will search for the first stars and galaxies of the universe. It will allow scientists to make careful studies of numerous exoplanets — planets that orbit stars other than our sun — and even embark on a search for signs of life there.

The Webb improves on Hubble in two key ways. The first is just its size: Hubble was about the size of a school bus, whereas Webb is more like the size of a tennis court. “This thing is enormous,” Straughn says. “Webb is by far the biggest telescope NASA’s ever attempted to send into space.” 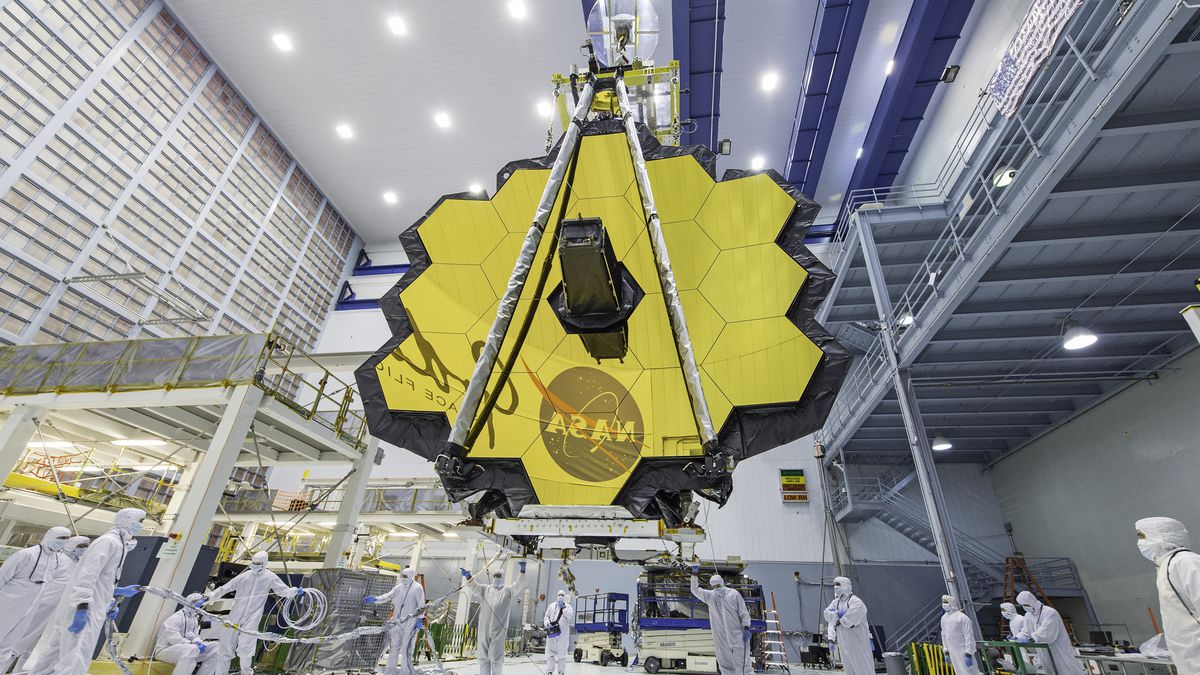 But it’s not just the total size of the contraption that matters. When it comes to reflecting telescopes, the key component is the size of its curved mirror. “You could sort of think of a telescope mirror like a light bucket,” Straughn says. The more light you can collect in this bucket, the fainter and farther-away things you can see in the universe.

Hubble’s mirror was an impressive 7.8 feet in diameter. Webb’s beautiful, gold-hued mirrors combine for a diameter of 21.3 feet. Overall, that amounts to more than six times the light-collecting area.

Scientists are clearly raring to go, but the Webb revolution has taken a while. One reason for all the launch delays to the launch has to do with contractor snafus. But a big source of all of them, NASA’s Straughn says, is the complexity of the Webb itself.

“Because it’s so big, there aren’t any rockets that are big enough to launch it fully deployed,” Straughn says. The telescope has to be folded up to fit inside a rocket (see video below), and has to deploy itself in space. “So that whole process of building a deployable telescope in space is the source of a lot of the engineering challenges.”

Upping the stakes is the fact that while Hubble was launched to around 340 miles above the Earth, Webb will be almost a million miles away (see video above) — four times the distance from the Earth to the moon.

That means once the Webb is launched, it will be unserviceable by human hands if it breaks. That’s scary, considering the history of the Hubble. Shortly after the Hubble launched in 1990, engineers realized there was a problem with its mirror; the telescope’s initial images came back fuzzy, and astronauts had to launch a space shuttle to fix it. That won’t be possible with the Webb. It just has to work.

It will be far away for good reason. Because Webb is an infrared telescope, it needs to be kept cold. The Earth itself is warm and glows in infrared. “Anything warm glows in infrared light,” Straughn says. “If the telescope was warm, it would just glow and see itself.”

Any scientist around the world can apply to use the Webb Space Telescope, provided they write up a project proposal that passes peer review. It’s pretty competitive. Last year the Space Telescope Science Institute, which operates space telescopes from John Hopkins University in Maryland, put out a call for proposals for Webb’s first observing run. About a quarter of the proposals were accepted.

“It feels like part of me is still stunned,” says Lisa Dang, a physics PhD student at McGill University who was one of the lucky few to get approved to use the Webb. “And the other part is having this imposter syndrome — like, these data better be really amazing.”

Dang is set to study one of the most extreme planets ever discovered: K2-141 b, a planet 202 light-years from Earth and so close to its host star that its surface is believed to be covered by an ocean of lava. If it has clouds, they are likely made out of vaporized rock, which could then precipitate out “rock rain.” Not much is confirmed about this lava planet, but Dang will use the Webb to study its atmosphere and see what’s possible on this extreme world.

Winning the project proposal “made me feel like an astronomer for the first time,” Dang says. “But it also makes K2-141 b very real suddenly.”

This is the power of an unprecedented telescope such as the Webb. It will help astronomers like Dang fill in the blank spaces of the cosmos.

“It’s wild, when you think about it, that we’re able to piece together the history of what happened before the Earth or the sun even existed,” Casey says.

If all goes according to plan, these kinds of breakthroughs could come in a matter of months. Astronomers around the world are waiting for the countdown to begin.