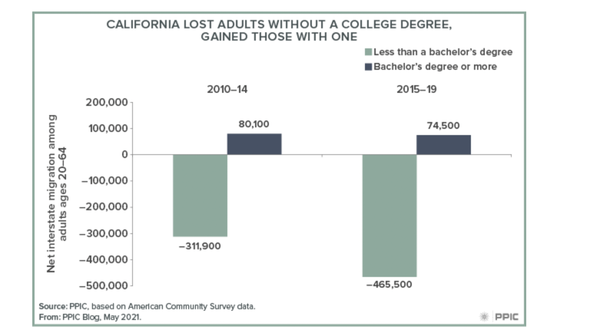 New York Times columnist, Paul Krugman, has an essay today entitled, The Gentrification of Blue America, in which he analyzes the economics of housing in the country especially as it has played out in California and other blue states that employ large numbers of high-paid tech and service workers.  Here is summary.

“The result is that there are now, in effect, two Americas: the America of high-tech, high-income enclaves that are unaffordable for the less affluent, and the rest of the country.

And this economic divergence goes along with political divergence, mainly because education has become a prime driver of political affiliation.

It may seem hard to believe now, but as recently as the early 2000s college graduates leaned Republican. Since then, however, highly educated voters — who have presumably been turned off by the G.O.P.’s embrace of culture wars and its growing anti-intellectualism — have become overwhelmingly Democratic, while non-college-educated whites have gone the other way.

As a result, the two Americas created by the collision of the knowledge economy and NIMBYism correspond fairly closely to the blue-red division: Democratic-voting districts have seen a big rise in incomes, while G.O.P. districts have been left behind.”

His conclusion:  “There are hints of movement toward less restrictive housing policy; California’s legislature has just passed a bill that would, in essence, force suburbs to accept some two-unit buildings alongside single-family homes. Even this modest measure would make it possible to add around 700,000 housing units — roughly the same number added in the whole state between 2010 and 2019.

We need much more of this. Restrictive housing policy doesn’t get nearly as much attention in national debates as it deserves. It is, in fact, a major force pulling our nation apart.

The entire essay is worth the read and is available here.