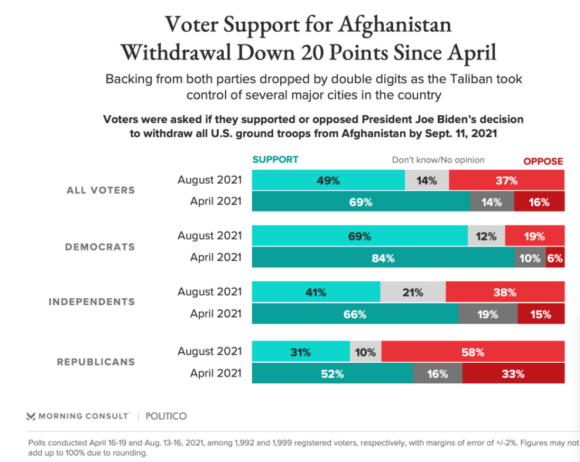 President Joe Biden is standing firm by his decision to withdraw U.S. forces from Afghanistan, despite chaotic scenes of the Taliban rapidly seizing control and the U.S. rushing to airlift diplomats out of the country.

Behind his confidence is a political bet that a war-weary U.S. public will stick with him and enable him to weather a firestorm of criticism, not just from his Republican opposition but also from Democratic allies who promise to investigate failures surrounding the withdrawal.

Public support for the withdrawal has fallen from earlier this year, but pluralities indicate that Americans still want U.S. forces out, according to two new surveys.

A Yahoo News poll found that 40 percent support the pullout, while 28 percent oppose it. (In July, 50 percent favored the pullout.)

A Morning Consult/Politico poll found that 49 percent support the withdrawal, while 37 percent oppose it. (In April, 69 percent backed withdrawal.)

The criticism has been heaviest over the execution of the withdrawal, including the failure to evacuate U.S. personnel and partners in time for the rapid Taliban takeover. Republican lawmakers, and some Democrats, have compared it to the fall of Saigon, South Vietnam, in 1975.

Biden needs all the political capital he can muster — to spend on signing an infrastructure bill and a $3.5 trillion social safety net package at the core of his domestic agenda, which his party is counting on to survive a difficult midterm election cycle next year.

Democratic strategists say Biden is on solid political footing, arguing that Americans will ultimately see the issue as a simple choice between continuing the occupation and ending it.

“No one likes where this ended up, but it’s hard to see Republicans winning elections on a campaign promise to go back to war in Afghanistan in 2022 or 2024,” said Jesse Ferguson, a Democratic consultant who has worked for the party’s House campaign arm and Hillary Clinton’s 2016 presidential bid.

Republicans see little opportunity in digging in on a pro-war position, particularly after 20 years of money and lives lost trying to build a democratic state that collapsed like a house of cards as soon as U.S. forces left.

Chris Hartline, a spokesman for the Senate GOP campaign arm, said of the politics of the withdrawal: “It’s hard to tell how it’ll play in the long run.”

But he said the situation paints Biden as a “weak leader” who operates with a “nonchalance” on issues like the border, inflation and now Afghanistan. Taken together, he said, Biden appears “weak, disengaged or just plain lost.”

Matt Gorman, a Republican consultant who has worked on presidential and House races, said the issue of Afghanistan resonates with voters insofar as Biden’s opposition can tie it to his leadership on matters that affect them day to day.

“The biggest political risk here is that it compounds with inflation, gas prices and crime. This is all making Biden look like a bystander,” he said. “He’s watching events and not leading them.”

But to Biden’s allies, the decision to pull out and absorb the short-term pain was a mark of leadership that his three predecessors who oversaw the war lacked the courage to practice. In a speech Monday, Biden said that Americans shouldn’t be asked to step up when Afghanistan’s own armed forces wouldn’t and that he won’t “pass this responsibility on to a fifth president.”

He defended his decision in an ABC News interview published Wednesday.

“The idea that somehow there’s a way to have gotten out without chaos ensuing, I don’t know how that happens,” Biden said. “I had a simple choice. If I said, ‘We’re going to stay,’ then we’d better be prepared to put a whole lot, hell of a lot more troops in.”

His remarks channeled weariness with war among the public, with voters in both parties turning against wars in Afghanistan and Iraq, which were launched after the Sept. 11 terrorist attacks nearly 20 years ago. Trump capitalized on similar sentiments in his 2016 campaign.

Likely voters support the withdrawal by 51 percent to 37 percent, according to a new poll by Data for Progress, a progressive firm that has been cited by the White House.

“Even with the negative coverage of the last few days, Data for Progress and other pollsters still find net support for withdrawal,” said Sean McElwee, the group’s executive director. “Ultimately, the American public does not support permanent overseas occupation.”

I believe that Biden and the Democrats will weather the Afghanistan withdrawal situation by the time the midterm elections come in 2022.