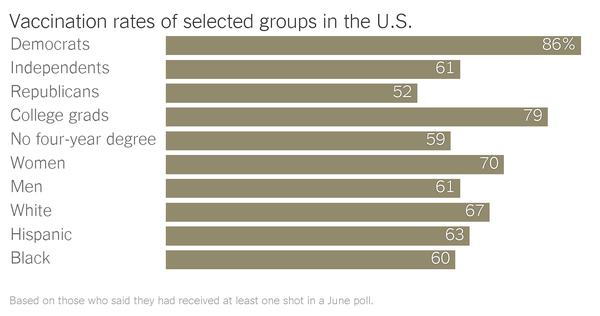 The Kaiser Family Foundation conducted a poll at the start of the year and asked American adults whether they planned to get vaccinated, 23 percent said no.

But a significant portion of that group — about one quarter of it — has since decided to receive a shot. The Kaiser pollsters recently followed up and asked these converts what led them to change their minds. The answers are important, because they offer insight into how the millions of still unvaccinated Americans might be persuaded to get their vaccines.  As reported in The New York Times.

First, a little background: A few weeks ago, it seemed plausible that Covid-19 might be in permanent retreat, at least in communities with high vaccination rates. But the Delta variant has changed the situation. The number of cases is rising in all 50 states.

Although vaccinated people remain almost guaranteed to avoid serious symptoms, Delta has put the unvaccinated at greater risk of contracting the virus — and, by extension, of hospitalization and death. The Covid death rate in recent days has been significantly higher in states with low vaccination rates than in those with higher rates.

(The themes apply to both the 23 percent of people who said they would not get a shot, as well as to the 28 percent who described their attitude in January as “wait and see.” About half of the “wait and see” group has since gotten a shot.)

1. Seeing that millions of other Americans have been safely vaccinated.

Consider these quotes from Kaiser’s interviews:

The above suggest that emphasizing the safety of the vaccines — rather than just the danger of Covid, as many experts typically do — may help persuade more people to get a shot.

A poll of vaccine skeptics by Echelon Insights, a Republican firm, points to a similar conclusion. One of the most persuasive messages, the skeptics said, was hearing that people have been getting the vaccine for months and it is “working very well without any major issues.”

For many people who got vaccinated, messages from politicians, national experts and the mass media were persuasive. But many other Americans — especially those without a college degree — don’t trust mainstream institutions. For them, hearing directly from people they know can have a bigger impact.  “Hearing from experts,” as Mollyann Brodie, who oversees the Kaiser polls, said “isn’t the same as watching those around you or in your house actually go through the vaccination process.”

These comments suggest that continued grass-roots campaigns may have a bigger effect at this stage than public-service ad campaigns. The one exception to that may be prominent figures from groups that still have higher vaccine skepticism, like Republican politicians and Black community leaders.

3. Learning that not being vaccinated will prevent people from doing some things.

There is now a roiling debate over vaccine mandates, with some hospitals, colleges, cruise-ship companies and others implementing them — and some state legislators trying to ban mandates. The Kaiser poll suggests that these requirements can influence a meaningful number of skeptics to get shots, sometimes just for logistical reasons.

This is an interesting study that our policymakers should review and consider as they try to encourage the unvaccinated to get their shots.