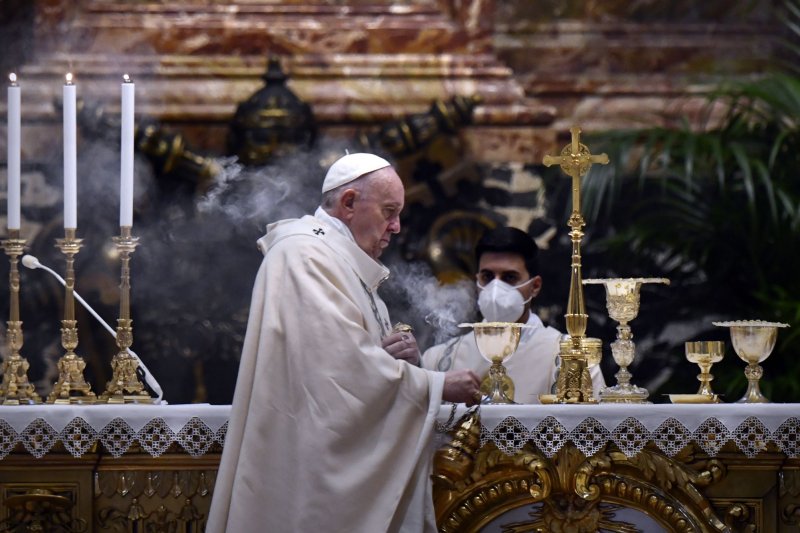 Pope Francis took a significant step toward putting the Roman Catholic Church’s liturgy solidly on the side of modernization on Friday by restricting the use of the old Latin Mass, and reversing a decision by his conservative predecessor, Pope Benedict XVI.  The restrictions include where the old Latin Mass can be celebrated, who can celebrate it, and will require new permissions from local bishops.  The move to restrict the use of the old Latin rite in celebrating Mass dealt a blow to conservatives, who have long complained that Pope Francis is diluting the traditions of the church.  Here is an excerpt from a New York Times article.

“The Pope’s latest salvo in the church’s so-called liturgy wars came weeks after conservative American bishops, many of whom are attached to the old Latin Mass, essentially shrugged off the Vatican’s strong guidance to slow down a potential confrontation with President Biden over his support for abortion rights. In recent days, influential prelates in Rome have also argued that Francis had not followed through on his promises to modernize the church.

But Francis’ action on Friday was bold and concrete. He wrote that he believed champions of the old Latin Mass were exploiting it to oppose more recent church reforms and to divide the faithful. In the 1960s, the church sought to make the faith more accessible with liturgy in living languages that made use of modern idioms in its prayer books.

In subsequent decades, traditionalists recoiled and conservative pontiffs let the Latin Mass come back, which included priests facing the altar and not the congregation, saying older prayers and, most importantly, using solely the Latin language.

Francis’ predecessor, Pope Benedict XVI, had relaxed restrictions on the old Latin Mass, also called the Tridentine Mass, in 2007. It was a move seen as reflective of a shift toward traditionalism.

In statements released by the Vatican on Friday, Francis argued that the change, designed to bring unity to the church and its most traditionalist and schismatic corners back into the fold, had become a cause of division and a cudgel for conservative opponents of the Second Vatican Council, the major church meetings of the 1960s that ushered in many modernizing measures.

Francis cited those measures in explaining his law, called “Traditionis Custodes.” Many analysts see Francis’ pontificate as the restoration of engagement with the modern world after three decades of leadership by conservative popes.

Doubting the council, Francis wrote in a document explaining his motivations for the new law, is “to doubt the Holy Spirit himself who guides the Church,” and associating only the old rite with what traditionalists often call the “true Church” led only to division.

Francis argued that those traditionalists had essentially taken advantage of the kindness of his predecessors. The 16th-century Tridentine Mass was replaced after the Second Vatican Council with a new standard version approved in 1970. Nevertheless, some traditionalists insisted on celebrating it and rejected the new version as a corruption.

In 1983, Pope John Paul II sought to heal a rift with a schismatic, traditionalist movement by asking bishops to grant the request of the faithful who wished to use the old Latin Mass. But Francis said some traditionalists exploited that decision to effectively create a parallel liturgical universe.

Benedict clearly put his weight, and that of the whole church, on the side of the old rite in 2007 when he increased access to the traditional Latin Mass. He argued that, among other things, it appealed to young people and that the two forms, old and new, “would enrich one another.”

But Francis argued that things had shaken out differently.

The Vatican’s doctrinal watchdog, once led by Benedict, conducted a survey of bishops that showed, Francis wrote, “a situation that preoccupies and saddens me, and persuades me of the need to intervene.”

He wrote that his bishops believed that a byproduct of Benedict’s 2007 decision had been division in the church.

Francis made it clear that bishops must make sure that groups celebrating the old Latin Mass “do not deny the validity and the legitimacy” of the standard liturgy.

He gave local bishops more flexibility in regulating liturgical celebrations and deciding whether and where the old Latin Mass could be used and that it shouldn’t be celebrated in newly established personal parishes “tied more to the desire and wishes of individual priests” than to the faithful.

Priests celebrating old Latin Masses now require authorization from their bishop, and in some cases bishops will need to consult with the Vatican before granting approval.”

I was brought up in a very observant Catholic home and studied Latin for three years in high school.  When Pope Benedict resurrected the Latin Mass, my local parish occasionally would have a visiting priest celebrate it.  I went to one of these services and enjoyed hearing the prayers in Latin.  It brought back a lot of memories.  However, when it came to the homily, the priest gave this diatribe on conservative issues including abortion, women’s place in the church, and priest celibacy.  I almost walked out and have not been back to a Latin Mass since.  Pope Francis was right in putting restrictions on its celebration.