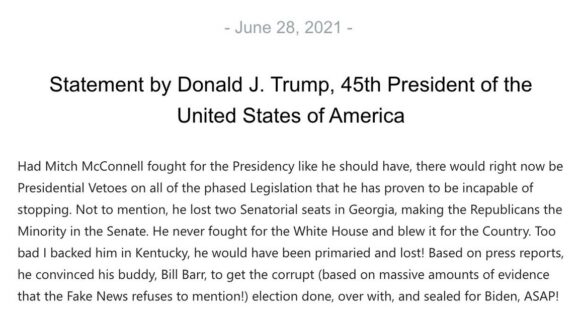 Yesterday Donald Trump attacked  Senate Minority Leader Mitch McConnell, baselessly saying that the Kentucky Republican could have somehow kept him in office and yet chose not to.

“Had Mitch McConnell fought for the Presidency like he should have, there would right now be Presidential Vetoes on all of the phased Legislation that he has proven to be incapable of stopping,” the former president wrote in a statement. “Not to mention, he lost two Senatorial seats in Georgia, making the Republicans the Minority in the Senate. He never fought for the White House and blew it for the Country.”

By fighting for the White House, Trump is likely referring to McConnell refusing to overturn the 2020 election that handed Joe Biden the presidency. Trump’s efforts to peddle the lie that the election was fraudulent led to the deadly Jan. 6 insurrection at the U.S. Capitol carried out by his supporters, who were trying to stop Congress from certifying the Electoral College vote count.

Despite blaming the riot on Trump, McConnell still voted against convicting the former president at his impeachment trial for inciting the insurrection and said in February that he would “absolutely” support Trump in a 2024 presidential race.

In reality, the Senate minority leader and his party have effectively blocked several pieces of important Democratic-led legislation in the Senate by using filibuster rules, in which bills require 60 votes in order to advance. Senate Republicans blocked a bipartisan bill in May that would have created a commission to investigate the Jan. 6 attack and shut down debate earlier this month on a sweeping election bill covering voting rights, campaign finance, redistricting and government ethics.

Trump and McConnell deserve each for their duplicity!