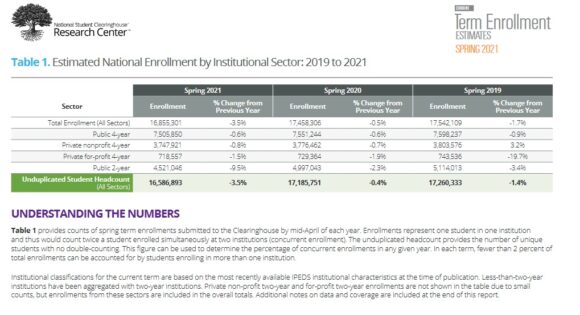 The National Student Clearinghouse Research Center is reporting  that total college enrollments declined 3.5 percent or 603,000 students in Spring 2021 compared to one year ago.  The 3.5-percent figure is the largest year-over-year decline since the Research Center began publishing enrollment data a decade ago.

Overall spring enrollment fell to 16.9 million from 17.5 million, marking a one-year decline of 3.5 percent or 603,000 students, seven times worse than the decline a year earlier. Undergraduate students accounted for all of the decline, with a 4.9 percent drop or 727,000 students. In contrast, graduate enrollment jumped by 4.6 percent, adding more than 124,000 students.

Among all age groups, traditional college-age students declined the most (-5%, age 18-24), largely attributable to their steep losses at community colleges (-13.2%). Adult students (25 or older), on the other hand, show a 2 to 3 percent gain at public four-year and private nonprofit four-year colleges.

In looking at the data, while much of the decline is due to the pandemic, they also reflect a decrease in the number of high school graduates.