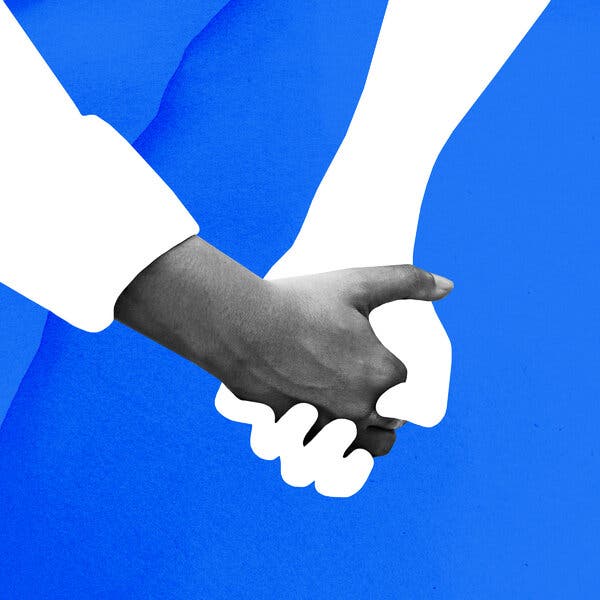 Anna Broadway, an author who is writing a book about the experience of being single in countries around the world, during which she spent more than a year traveling, conducting interviews and observing how people interact with each other, has a guest essay in today’s New York Times suggesting that as we come out of the isolation of the pandemic, we need “the many forms of nonsexual contact that once permeated daily life. Returning to normal offers not just a chance to resume hugs and handshakes, but also to ask if we should engage in more forms of touch with our friends and colleagues.”  Here is an excerpt.

“As I learned from 17 months of travel abroad before the pandemic, America has a narrow approach to touch. (I’d witnessed the difference on previous travel abroad, but a trip of this duration allowed me to also experience the difference firsthand.) As adults, our opportunities to touch each other are generally limited to a handshake when we meet someone for the first time, a quick hug greeting of a friend, and all the forms of touch two people in a romantic relationship exchange.

In other countries, touch is far freer. I interviewed Christian singles around the world, talking to more than 300 people in nearly 40 countries — all but a handful in person. In several of those places, I saw public touch between same-sex pairs that has almost no corollary in the United States.

In Addis Ababa, Ethiopia, this looked like two middle-aged men in suits holding arms as they hailed a cab. Men holding hands in India is common. In Seoul, South Korea, I saw students holding hands with their friends to show affection.

Sign Up for Love Letter: Your weekly dose of real stories that examine the highs, lows and woes of relationships. This newsletter will include the best of Modern Love, weddings and love in the news.

Less often did I observe platonic touch between the sexes during my travels, but three different men in Tanzania held my hand, all in the context of crossing a busy street or otherwise helping ensure my safety. Each time, I reacted first as an American, whereby most adult touch implies sexual attraction, rather than care or solidarity. But as it continued to happen, my perception changed and gratitude bloomed. I might have spent more than a year as a stranger and outsider in the countries I visited, but each kind touch showed I was never really alone.

At times, I even felt more connected abroad than at home. As an unmarried 42-year-old, my touch deficit started well before the pandemic. For most of adulthood, I’ve lived far from family and even though I almost always had roommates, we rarely hugged.

Why should so many relationships yield deep intellectual and emotional bonds that we so rarely express in touch? Depending on when you think life begins, we spend nearly the first 10 months of life tethered to another human being — and every heartbeat depends on that tie. Even after birth, infants do best when they maintain near-constant touch with other humans. If early life depends on such connections, why do we find them so dispensable later?

And how do we exchange more caring touch in a world still recovering from a pandemic spread largely through contact with others?

Shortly before the pandemic started, I ended my travels with a move to Alaska to write. Though the local “hunker down” soon hampered my ability to build community, I’ve learned that I don’t need legions of people to feel connected. During my time on the road, I stayed with dozens of couples and families who made me feel at home in their city. So when I settled in Anchorage, I sought similar housing, eventually ending up with a young family of five who also valued living in community. Between living with them, finding a few walk buddies and maintaining one friendship in which we never stopped hugging, I feel pretty content most weeks. Having fewer relationships allows me to invest more deeply and consistently in others, while limiting the possible spread of infection.

Touch within my relationships varies with each person’s comfort level. Almost from our first meeting, my youngest housemate (now nearly 3) took a liking to me and has become one of the most physically affectionate people in my life. Her mother and I hug mostly when we sense the other needs comfort. When vaccination brought up her fear of needles, we got both our shots together so she could hold my hand for the jab.

Returning to — and expanding — touch may feel weird at first. And we’ll need to be sure to ask each other, “Are you OK with this?” To find the right balance, we could learn from both the youngest and the oldest around us. One of my favorite parts about living with young children is how freely they can show delight when a loved one arrives. When you’re not even family, it feels amazing to see a child light up at your presence.

With adults, that might look like a greeting I got at pickleball recently, from a semiretired friend whom I’d not seen in several months. “I’m vaccinated!” he cried. “Are you vaccinated?” As soon as I nodded, he grabbed me for a bear hug and kissed my neck (before doing so a second time later, he asked if I was OK with the hug).

As this pandemic has painfully shown us, none of us lives and breathes apart from others. With masks, we’ve rightly sought to limit our bodies’ potential to harm. But post-pandemic, we need to recover our bodies’ capacity to comfort, help and heal each other.”

While I don’t know if we are read for it, I like what Ms. Broadway is saying!