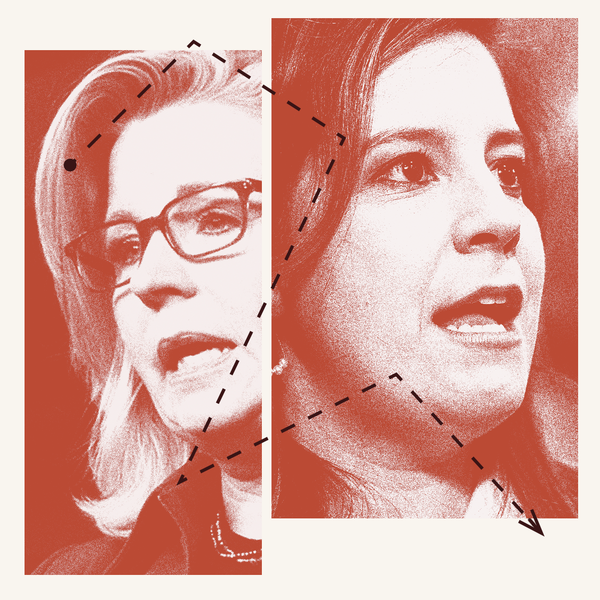 Michelle Cottle, a member of The New York Times Editorial Board, had a piece yesterday comparing Liz Cheney and Elise Stefanik.  She praises Cheney for her willingness to jeopardize her House leadership position and maybe her political career to speak the truth about Donald Trump.  Stefanik, on the other hand, appears willing to do or say anything to take over the House leadership position even kowtow to Trump.  Cotter makes the observation that Stefanik may not be conservative enough for the Republican base.  In addition, there is a contingent that consider her a “TINO” or  “Trumpist in name only.”

The entire piece is below.  Good read!

Liz Cheney Refuses to Lie, So Elise Stefanik Steps In!

Even by the standards of the Republican Party’s descent into Trumpian nihilism, the latest bloodletting within the ranks of its congressional leadership is gripping — the car crash next to the dumpster fire that you can’t look away from.

House Republicans are on track next week to oust Representative Liz Cheney of Wyoming as conference chairwoman, the third-highest position in the conference. Ms. Cheney is being purged for her stubborn refusal to accept — much less peddle — the dangerous, crackpot lie that the 2020 election was stolen from former President Donald Trump. In today’s G.O.P., fealty to the defeated president’s false allegation of electoral fraud is the ultimate litmus test.

Ms. Cheney has not simply failed this test, repeatedly — she brandishes her defiance like a weapon.

On Monday, Mr. Trump issued a proclamation: “The Fraudulent Presidential Election of 2020 will be, from this day forth, known as THE BIG LIE!” Ms. Cheney fired back on Twitter (from which the former president is still banned): “The 2020 presidential election was not stolen. Anyone who claims it was is spreading THE BIG LIE, turning their back on the rule of law, and poisoning our democratic system.”

“The Republican Party is at a turning point,” she warned in a May 5 opinion piece in The Washington Post, “and Republicans must decide whether we are going to choose truth and fidelity to the Constitution.”

But with a House leadership dominated by white men, and a party plagued by a longstanding gender gap, Republican lawmakers recognize the potential risk of replacing their top-ranking woman with another white guy. Such bad optics. So it is that Republican House leaders have been whipping votes to install another woman in the job, Representative Elise Stefanik of New York.

Unlike Ms. Cheney, Ms. Stefanik is happy — make that eager — to go along with Mr. Trump’s pernicious election-fraud fiction. Just this week, she sat down for interviews with Steve Bannon, Mr. Trump’s onetime political guru, and Sebastian Gorka, a former Trump aide, to praise the former president and suggest that there are many, many questions that still need to be answered about the outcome. Among other Trumpist talking points, she accused judicial officers in Pennsylvania of “unconstitutional overreach,” and she endorsed the sketchy election audit that Republicans are conducting in Arizona.

Ms. Stefanik is assumed to have more than enough votes lined up to replace Ms. Cheney. Her ascension is considered close to a done deal.

Here’s where things really get awkward. Aside from her Trump bootlicking, Ms. Stefanik is a terrible pick to help lead House Republicans, with both an ideology and a political style ill-suited to the conservative zeitgeist. At least they were until recently. In aiming to swap out Ms. Cheney with Ms. Stefanik, Republican leaders are revealing — again — just how hollow their party has become and how far it has fallen.

With her establishment pedigree and her neocon foreign policy views, Ms. Cheney may not be a perfect fit for today’s Republican Party, but she is a rock-ribbed conservative who has for years fought fiercely in the party trenches. Like her father, former Vice President Dick Cheney, she is tough and aggressive, and she delights in lobbing partisan bombs at Democrats. She is pro-torture and anti-abortion. In other words, she has long been the kind of Republican that Democrats love to hate.

Ms. Stefanik, on the other hand … Most of America had never heard of the New York lawmaker before her emergence as a passionate Trump defender during his first impeachment. Her toadiness has only grown since, earning ever more love from Mr. Trump. On Wednesday, he endorsed her for conference chairwoman.

But before all that, Ms. Stefanik was seen as an exemplar of the kinder, gentler future of the Republican Party. Elected in 2014 at age 30, the polished, media-savvy Harvard alumna was a fresh, friendly, moderate face that many hoped would help the G.O.P. shed its image as a bunch of angry old white guys. Pro-business and uninterested in culture warring, she fit in well with the party’s establishment wing. Her first political job was in the Bush 43 White House. In 2017, she was elected co-chair of the Tuesday Group (since renamed the Republican Governance Group), a caucus of moderate, centrist House Republicans.

Ms. Stefanik’s voting record reflects this brand. She has a measly 44 percent lifetime score from the American Conservative Union — compared to Ms. Cheney’s 78 percent — and a 56 percent from the conservative Heritage Action, versus Ms. Cheney’s 82 percent. Ms. Stefanik’s ratings from conservative groups like FreedomWorks and the Club for Growth are even lower (37 percent and 35 percent), and both organizations have come out against her joining leadership. During Mr. Trump’s presidency, Ms. Stefanik voted with him 77.7 percent of the time, according to FiveThirtyEight, but Ms. Cheney did 92.9 percent of the time.

One of Ms. Stefanik’s top priorities has been to improve her party’s image with women and, more specifically, to get more Republican women elected. Her PAC is credited with having contributed to the victories of several women in this year’s freshman House class. Her efforts, which can run up against the G.O.P.’s professed disdain for identity politics, have occasionally put off some party brethren.

Ms. Stefanik is, in short, the kind of Republican that conservatives generally love to hate.

Despite the seal of approval from Mr. Trump and some congressional leaders, not everyone is thrilled by the idea of Ms. Stefanik’s likely promotion. Some of her male colleagues have grumped that they were not even considered for the post because of their gender. The conference vice chair, Mike Johnson of Louisiana, has reportedly been griping about the “coronation.”

Trickier still, some hard-core MAGA loyalists suspect Ms. Stefanik of being a pretender — a “wolf in sheep’s clothing,” as one far-right site put it — and are raising a stink about her voting record and political background. Lou Dobbs, the deep-MAGA former TV host, declared her a RINO — that is, a Republican in name only. Her more creative critics at the website Revolver coined a fresh term for her: TINO — Trumpist in name only. They also dubbed her “another neocon establishment twit.”

So much for Republican unity.

To be fair, having sold their soul to Mr. Trump, Republican lawmakers cannot allow Ms. Cheney to remain in leadership. Unlike most of her colleagues, she refuses to let the Jan. 6 attack on the Capitol fade from memory, pretend it was no big deal or falsely claim that it was perpetrated by lefty extremists. Every word out of her mouth is an indictment not merely of Mr. Trump but also of her fellow lawmakers’ degeneracy and opportunism.

Ms. Stefanik, by contrast, is scrambling to reassure MAGA voters that she is worthy of their support. In addition to doubling down on election-fraud nonsense, she has been test-driving a more populist, own-the-libs persona, whining about “cancel culture” and “Trump derangement syndrome” and the anti-conservative bias of Big Tech.

In other words, Ms. Stefanik is forsaking the ideology and the political brand that brought her to Congress as she grovels before the gold-plated altar of Trumpism. All this to impress the followers of a defeated president who would just as soon see the Republican Party burned to ash.

In that sense, she may be a perfect leader for her House colleagues after all.