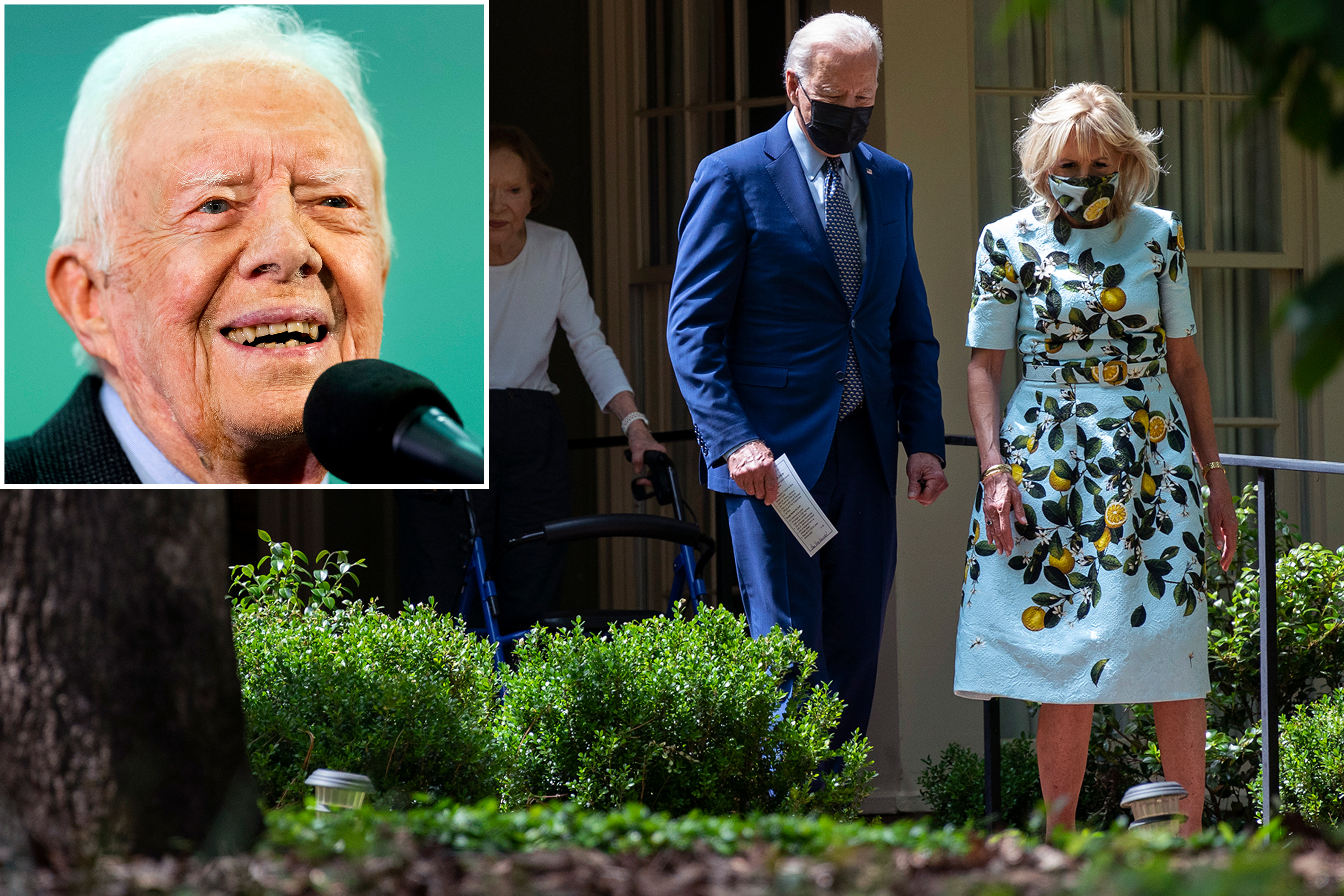 Joe and Jill Biden Meet with Jimmy and Rosalynn Carter

Maureen Dowd in her column this morning reviews the relationship between Jimmy Carter and Joe Biden.  Unlike previous Democratic presidents and candidates who avoided Carter like the plague, Biden went out of his way to pay his respects to someone he considers a long-time friend.  Dowd reserves some of her piece to describing the icy treatment that Carter received from Bill Clinton and Barak Obama.  Here is a snippet from her column:

“Pretty much every Democratic convention from 1984 until 2020, there was some kind of an issue over, ‘How do we deal with Jimmy Carter?’” said Jonathan Alter, the author of “His Very Best: Jimmy Carter, a Life.” “He was still in bad odor not just in the country, but in parts of the Democratic Party.”

Carter has long nursed hurt feelings about how he was slighted by his Democratic successors.

“I had my best relationship, when he was in office, with George H.W. Bush,” he told me when I interviewed him in Plains in 2017, the weekend of his 93rd birthday.”

The entire column is below.

WASHINGTON — Joe Biden has respect for his elders. And there aren’t that many of them.

Before the president’s rally near Atlanta on Thursday, he and Jill went out of their way to pay respects to the 96-year-old Jimmy Carter.

This made Biden the first president to make a pilgrimage to Plains since Carter left office, unless you count Yasir Arafat.

If there’s a pol who knows what it feels like to be underappreciated by his own party, it’s Biden. And he wasn’t going to continue to let Carter, at the end of his life, be treated like a pariah in peanutville.

“Pretty much every Democratic convention from 1984 until 2020, there was some kind of an issue over, ‘How do we deal with Jimmy Carter?’” said Jonathan Alter, the author of “His Very Best: Jimmy Carter, a Life.” “He was still in bad odor not just in the country, but in parts of the Democratic Party.”

Carter has long nursed hurt feelings about how he was slighted by his Democratic successors.

“I had my best relationship, when he was in office, with George H.W. Bush,” he told me when I interviewed him in Plains in 2017, the weekend of his 93rd birthday.

Being in far-flung Plains, and sitting inside Carter’s modest house on furniture made by Carter himself, drove home how incredible it was that he made it from there to the White House.

“Carter was a little bit needy in his relations with his successors,” Alter said. “But they were wrong not to take more advantage of his immense intelligence and experience in the world.”

When Bill Clinton lost re-election to the Arkansas governor’s mansion in 1980, he cast some blame on President Carter, who had sent thousands of Cuban refugees to be interned at Fort Chaffee in Arkansas. It didn’t exactly help Clinton’s chances when hundreds of Cubans broke out and roamed the streets yelling “Libertad!” When Clinton called the Carter White House to beg officials not to send any more Cubans to his state, they agreed. And then Carter sent lots more.

When Clinton became president, he treated Carter like the plague, not wanting to be tarred with the failures of another Southern Democratic governor.

Carter, the original virtue-signaler, threw some darts at Clinton, saying that he was “very disappointed” that Chelsea was going to a fancy private school instead of public school like Amy. As payback, the Clintons stuck the Carters in bad seats at their 1993 inaugural gala.

It drove President Clinton crazy that Carter was always telling him what he “should” be doing — sometimes in the press. Carter lobbied Clinton for more respect, complaining that he was being frozen out by the State Department. (Not that being frozen out ever stopped Carter from being a pot-stirrer on the world stage.)

When I interviewed Carter, he told me that he and Rosalynn had voted for Bernie Sanders over Hillary Clinton in the 2016 primary.

He also said he did not have Barack Obama’s email. Even though both men are highly intelligent, starchy at times, and have the same idea of hell — spending time with congressmen — there was a chill.

It was important to Obama to be seen as cool, and he was unhappy when the press began comparing him to Carter three years into the Obama presidency, echoing the words ineffectual and self-righteous.

Carter told me that Obama did not let him speak at his 2008 convention. Then Carter was asked to make a film. “I thought it was 20 minutes,” he told me, but it got cut down to 90 seconds and was not shown in prime time.

Carter was most hurt that Michelle Obama had a first ladies lunch on the issue of mental health — Rosalynn’s expertise — and did not invite her.

The supremely ethical Carter always could repay snubs by wrapping his pious cloak around himself and sending a little dig their way. He suggested to me that the Clinton Foundation was too much like an A.T.M. and that he would never make $400,000 speeches post-presidency, as Obama did.

Biden, by contrast, was eager to have Carter be part of his convention. For health reasons, the ex-president ended up making an audio recording, joined by Rosalynn. Carter has had two falls that have affected his vision and a bit, his speech, but his mind is clear and he still swims for exercise.

Biden was the first senator to endorse Carter’s presidential bid in 1976 when he was a long shot. A former Biden aide says, “Those guys love each other.”

“Some of my colleagues in the Senate thought it was youthful exuberance,” Biden recalled in a new documentary, “Carterland.” “Well, I was exuberant. But as I said then, ‘Jimmy’s not just a bright smile. He can win, and he can appeal to more segments of the population than any other person.’”

Biden is all about the good vibes right now, so of course he’s not icing out Carter.

“Any president who puts solar panels on the White House — taken down by Reagan — is going to be seen in a better light now,” Alter said. “I’m always gobsmacked by how much more he accomplished than reporters covering him realized. Historians and future generations have to judge presidents on a standard beyond whether they fought off a killer rabbit or collapsed in black socks while jogging.”

Reports of the Plains summit were positive. Biden, naturally, did most of the talking. And Carter did most of the basking. “He gained five years of life,” enthused a Carter friend.

Biden is less interested in the killer rabbit saga than that old fable about how the underappreciated tortoise wins the race in the end.