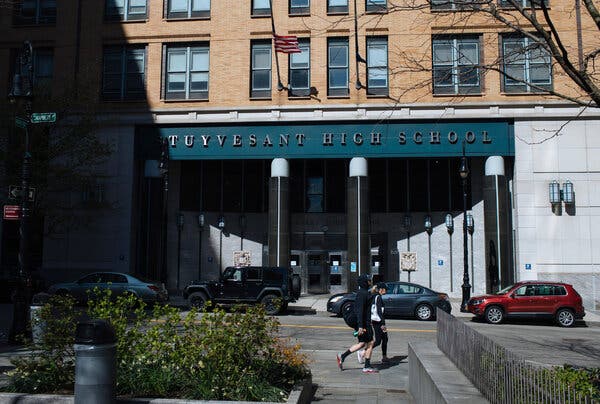 Only 9 percent of offers made by elite schools like Stuyvesant High School and Bronx High School of Science went to Black and Latino students this year, down from 11 percent last year. Only eight Black students received offers to Stuyvesant out of 749 spots, and only one Black student was accepted into Staten Island Technical High School, out of 281 freshman seats.  The numbers represent the latest signal that efforts to desegregate those schools while maintaining an admissions exam are failing.

Over half of the 4,262 offers this year went to Asian students. The schools have enormous significance for thousands of low-income Asian-American students who attend them, many of them immigrants or the children of immigrants. Efforts to change the admissions system have been seen by some as disregarding the accomplishments of those vulnerable students. Accusations of bias from Asian-American New Yorkers have made the debate over whether to keep the exam as the sole means of entry into the schools extremely fraught.  As reported by The New York Times.

The admissions exam was given earlier this year amid the pandemic, with 4,300 fewer students sitting for the test compared with the previous year.

The numbers are a grim symbol of the entrenched inequality that New Yorkers are confronting as the city begins to emerge from the pandemic. A year of profoundly disrupted learning for the city’s roughly 1 million students may make it even more challenging to address the lack of diversity in the specialized schools, though city officials are just beginning to understand the academic toll of what will be roughly 18 months of remote learning for many city students.

Black and Latino students have chosen remote learning at higher rates than their white classmates, in part because nonwhite New Yorkers have been disproportionately affected by the pandemic.

The numbers of Black and Latino students at the specialized schools are declining despite enormous focus on this issue over the last several years. Mayor Bill de Blasio has unsuccessfully lobbied the State Legislature to eliminate the admissions exam and replace it with a system that admits top performers at each city middle school.

The disappointing results released on Thursday show just how profoundly segregated the nation’s largest school system still is and will no doubt lead to fresh calls for the state, which controls entry into some of the schools, to get rid of the entrance exam.

Specialized school alumni have expressed dismay at the dwindling number of Black and Latino students. The percentage of Black and Latino enrollment at Stuyvesant, Bronx Science and Brooklyn Technical High School has hit its lowest point in the city’s recorded history in the last 10 years, a trend that has accelerated during the last several years in particular.

On Thursday, Dr. Uché Blackstock, a Black Stuyvesant graduate, said on Twitter, “I grieve for my high school. These numbers are abysmal.” She added: “The test has got to go.”

Horace Davis, a Black Brooklyn Tech graduate who is on the board of the school’s alumni organization, which has vigorously opposed changes to the admissions system, said the poor quality of some city schools, rather than the test, was responsible for the latest numbers.

“I’m not sure you’re going to see a change year over year,” he said of the numbers. “The system itself is broken.”

He added: “So much is being placed on the entrance exam, but it should not be viewed as a scapegoat.”

Current specialized school students and recent graduates have said it has been extremely upsetting to absorb the admissions numbers, year after year.

“We are outraged but not surprised at the alarming 2021 results,” Brianna Gallimore, a student at the High School of American Studies at Lehman College and an organizer at Teens Take Charge, a student-led group that supports eliminating the exam, said in a statement on Thursday. “The exam should not have been administered, especially during a pandemic. It should never be administered again.”

Aside from his effort to overhaul specialized school admissions, Mr. de Blasio has not made school integration of the roughly 1,800 schools he does control a top priority during his two terms as mayor. Disagreements between the mayor and Richard A. Carranza, the former schools chancellor, about how aggressively to pursue desegregation policies helped prompt Mr. Carranza’s resignation earlier this year.

The city’s new chancellor, Meisha Porter, called on the state to eliminate the exam in a statement Thursday. “I know from my 21 years as an educator that far more students could thrive in our specialized high schools, if only given the chance,” she said. “Instead, the continued use of the Specialized High School Admissions Test will produce the same unacceptable results over and over again.”

Mr. de Blasio’s push to get rid of the test failed in Albany in 2018, but the pandemic ramped up pressure on the mayor to take some action on desegregation before he leaves office at the end of the year.

Late last year, he announced sweeping changes to how hundreds of academically selective middle and high schools admit students. Standardized testing data and grading information was not available during the pandemic, which made it impossible for many schools to sort through students as they usually do.

City Hall controls admissions to all schools in New York City except for three of the specialized high schools, which are controlled by Albany. Changes to admissions at selective middle and high schools, along with gifted and talented programs for elementary school students, would do much more to actually desegregate the school system than eliminating the specialized school admissions exam, experts have said.”

But the paltry numbers of Black and Latino students at places like Stuyvesant and Bronx Science, considered the crown jewels of the system, have become a potent symbol of the obstacles many city students face in trying to access top-quality schools.

The latest data also shows clearly how ineffective recent efforts to diversify the specialized schools under the current admissions system have been.

New York City cannot get this admissions process right and New York State has no will to change it.