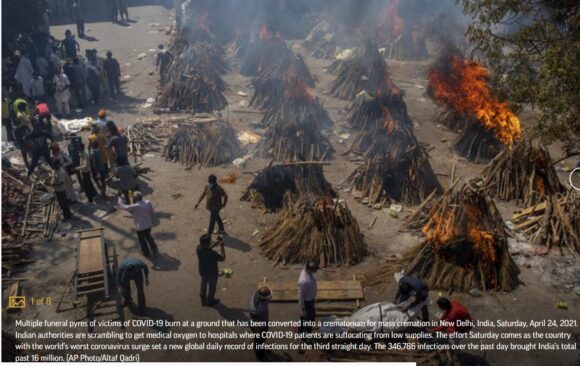 As we see the pandemic ravage other parts of the world such as in India where there are an estimated 300,000 new infections everyday, there is pressure on President Biden to assist by sharing technology and vaccine production with other countries.  It appears that intellectual property laws are a stumbling block.  Michelle Goldberg on Friday reviewed this complicated issue in her column (see below) in the New York Times.

There should be a way to get around intellectual property if President Biden and his administration have the will to do so.

Biden, the World Needs Your Help to End the Pandemic

The president should keep his promise on vaccine patents.

“The World Health Organization is leading an unprecedented global effort to promote international cooperation in the search for Covid-19 treatments and vaccines,” said Barkan. “But Donald Trump has refused to join that effort, cutting America off from the rest of the world. If the U.S. discovers a vaccine first, will you commit to sharing that technology with other countries, and will you ensure there are no patents to stand in the way of other countries and companies mass-producing those lifesaving vaccines?”

Biden was unequivocal. “It lacks any human dignity, what we’re doing,” he said of Trump’s vaccine isolationism. “So the answer is yes, yes, yes, yes, yes. And it’s not only a good thing to do, it’s overwhelmingly in our interest to do.”

Yet now that Biden is in power, his perception of our interest doesn’t seem quite so clear. Last year, India and South Africa requested a waiver from World Trade Organization rules governing intellectual property for technology dealing with the pandemic. Dozens of mostly developing countries have since joined them. A handful of rich nations, including the United States, oppose the waiver, but there’s a widespread belief that if America changes its position, other countries will follow. Much of the world is waiting to see what Biden does.

There’s an enormous consensus in favor of a waiver. It includes dozens of Nobel laureates and the former leaders of Britain, Canada, Costa Rica, France, Malawi, New Zealand and many other countries. Ten Democratic senators have asked Biden to accede to India and South Africa’s request. Representative Jan Schakowsky of Illinois is helping to organize a letter from members of the House, and so far almost 100 have signed on.

Most major health and human rights NGOs have joined the campaign for a waiver, including Doctors Without Borders, Partners in Health, Human Rights Watch and Oxfam International.

“This is, I think, one of the first promises broken,” Asia Russell, the executive director of the Health Global Access Project, an international advocacy organization, said of the Biden administration’s failure to support a waiver, at least so far. She compares it to the administration’s brief refusal to lift Trump’s refugee caps. “That was pretty completely reversed,” she said. “And this one has not been. And we’re in a pandemic. If not now, when?”

To be fair, this issue is more complicated than that of refugee admissions. It’s easy enough to dismiss arguments from Big Pharma that lifting intellectual property protections will stifle innovation, given the enormous public subsidies that underlie the creation of the vaccines. “U.S. taxpayers have invested huge amounts into making this happen,” said Schakowsky. But other arguments deserve to be taken seriously.

Dr. Peter Hotez, dean of the National School of Tropical Medicine at Baylor College of Medicine and a vaccine expert, isn’t against lifting the waiver, but thinks intellectual property isn’t the most important barrier to expanding vaccine access.

“It is an issue, but I wouldn’t put it at the top of the list,” he said. “Even if you were to liberalize all the patent restrictions completely tomorrow, it wouldn’t make a difference for this pandemic, I don’t think. And the reason is because the biggest problem is the technical know-how.” He argues that giving countries the formula for the vaccines won’t be enough if there isn’t a work force trained to make them.

Hotez is working with a company in India to produce a billion doses of a “people’s vaccine,” a low-cost, easy-to-manufacture Covid inoculation that’s finishing up Phase 2 trials. He’d like the U.S. government to help him produce five billion doses.

“These new technology vaccines are exciting and they’re very innovative, but with a brand-new technology, it’s difficult to go from zero to five billion very quickly,” he said.

But while a W.T.O. waiver isn’t sufficient to solve the vaccine shortage, it would be a start. In a recent letter to activist groups, Ngozi Okonjo-Iweala, the director general of the W.T.O., acknowledged that there is “untapped production potential in the developing world. Getting the intellectual property and technology transfer dimension right is clearly critical to unlocking this potential.”

Many of the world’s most accomplished public health figures believe that a waiver is a first step in allowing this process to begin.

“Every day we don’t put progressive policies in place is a day lost to saving more lives, so more people die,” said Russell. “Because you can’t flip that switch overnight — you need six months, one year, beyond, to gear this up. It doesn’t take forever, by any stretch. But the longer we say it will take too long, it will take much too long.”

Right now, widespread vaccination is freeing many Americans from a year of terror and isolation, even as new waves of the pandemic ravage countries like India and Brazil. Low- and middle-income countries say that a temporary change to global trade rules will help them defend themselves. Does the Biden administration really want to stand against them?

You can argue that America needs to help vaccinate the world to stem the evolution of new variants, or to reassert global leadership at a time when Russia and China have been engaged in much more effective vaccine diplomacy. But the real reason to do everything possible to help countries get the vaccines they need to combat this plague is the one Biden articulated to Ady Barkan last year.

“This is the only humane thing in the world to do,” he said. So he should do it.