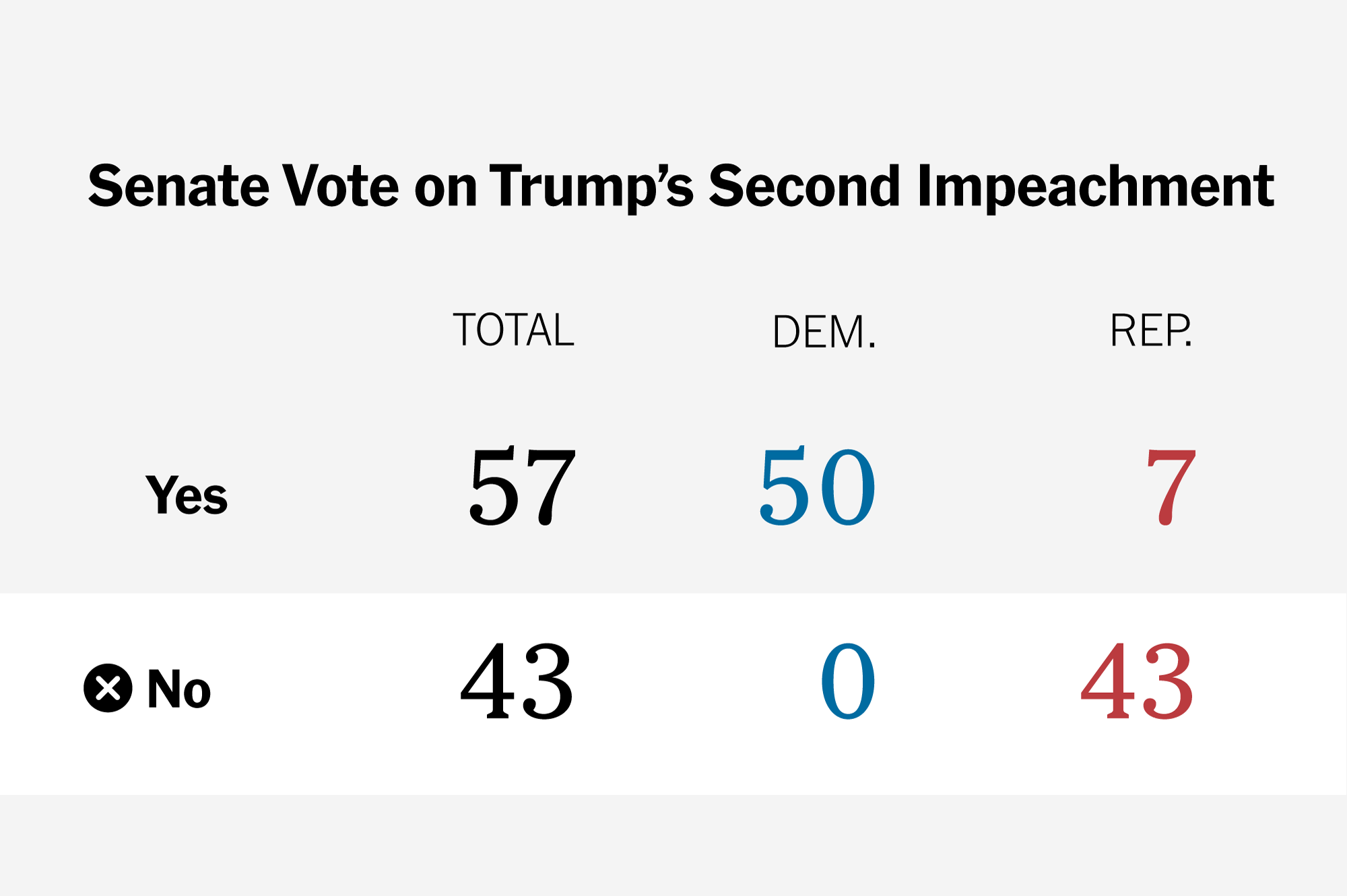 Donald Trump was acquitted yesterday of inciting the horrific attack on the U.S. Capitol on January 6th, concluding an historic impeachment trial that spared him the first-ever conviction of a current or former U.S. president but exposed the fragility of America’s democratic traditions and left a divided nation to come to terms with the violence sparked by his defeated presidency.  Fifty-seven senators found him guilty but short of the (67) two-thirds majority needed,

Seven Republicans voted to convict him, making this by far the most bipartisan impeachment effort in American history. It is worth remembering that until a year ago, when Mr. Romney cast the lone Republican “guilty” vote in Mr. Trump’s first impeachment trial, no senators had ever voted to convict a president from their own party.

A two-thirds majority to convict Mr. Trump, which would have cleared the way for a simple-majority vote to bar him from holding future office, was always extraordinarily unlikely, and everybody involved knew it. That was why — as The Times’s chief White House correspondent, Peter Baker, wrote two days ago — the House impeachment managers often seemed to be speaking less to the Senate than to history.

Representative Madeleine Dean of Pennsylvania, an impeachment manager, put it bluntly: “If we don’t set this right and call it what it was, the highest of constitutional crimes by the president of the United States, the past will not be past. The past will become our future,” she said in closing arguments. “Senators, we are in a dialogue with history.”

In speeches and statements after the vote, several Republicans who had voted to acquit Mr. Trump still declared him responsible for the assault on the Capitol. Among them was Senator Mitch McConnell of Kentucky, the minority leader.

“The people who stormed this building believed they were acting on the wishes and instructions of their president,” Mr. McConnell said, “and having that belief was a foreseeable consequence of the growing crescendo of false statements, conspiracy theories and reckless hyperbole, which the defeated president kept shouting into the largest megaphone on planet earth.”

Speaker Nancy Pelosi took that reasoning to task when she made an unexpected appearance at a Democratic news conference after the vote.

“It is so pathetic that Senator McConnell kept the Senate shut down so that the Senate could not receive the article of impeachment and has used that as his excuse for not voting to convict Donald Trump,” she said.

Yesterday was an historic moment.  Now the country needs to move on!