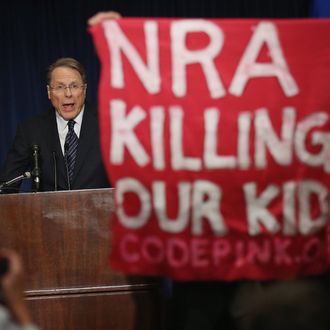 The NRA excoriated New York’s government and justice system in a statement, saying the state has a “toxic political environment.” Based in Fairfax, Virginia, the organization has operated as a New York-registered nonprofit since its founding in 1871.

The group will explore moving part of its operations to Texas, the NRA said.

The planned actions, including a Chapter 11 bankruptcy filing in Texas, come five months after New York state Attorney General Letitia James filed a civil suit that seeks to dissolve the association for and accused executives of using millions of NRA dollars for personal uses, including private-jet travel, trips to places including the Bahamas and pricey meals.

The NRA countered with its own suit against the attorney general, Gov. Andrew Cuomo and others for allegedly attempting to “blacklist” the group.

“The NRA’s claimed financial status has finally met its moral status: bankrupt,” James said in a statement yesterday. “While we review this filing, we will not allow the NRA to use this or any other tactic to evade accountability and my office’s oversight.”

Shannon Watts, founder of gun-safety group Moms Demand Action, said in a statement, “The NRA can try to run from its years of deception, decadence, and self-dealing, but it can’t hide.”

Kris Brown, president of the group Brady: United Against Gun Violence, had similar sentiments in his own statement Friday evening: “The NRA cannot be allowed to declare bankruptcy to try to escape potential criminal and civil accountability in New York.”

“Obviously, an important part of this plan is ‘dumping New York,'” LaPierre said in a statement. “The NRA is pursuing reincorporating in a state that values the contributions of the NRA, celebrates our law-abiding members, and will join us as a partner in upholding constitutional freedom.”

“The NRA abandons a state where elected officials have weaponized the legal and regulatory powers they wield to penalize the Association and its members for purely political purposes,” the NRA said.

Oliver North, the retired Marine lieutenant colonel who became the NRA’s president in 2018, stepped down in 2019 after alleging financial improprieties at the association.

His departure revealed an internal power struggle between North and LaPierre.

Saying it’s in its strongest financial shape in years, the NRA said it would seek court approval to incorporate as a nonprofit in Texas, where 400,000 of its claimed 5 million members reside, according to the NRA.

The organization plans to undergo restructuring “to streamline costs and expenses,” according to its statement.

Good  riddance, but don’t let LaPierre and company off the hook for their fiscal improprieties.