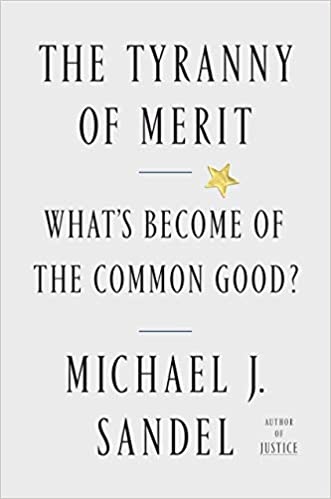 I just finished reading  The Tyranny of Merit: What’s Become of the Common Good by Michael J. Sandal, a professor of political philosophy at Harvard University.   His goal in writing this book is to show how our “meritocracy”  is not working for a large swath of “American life.”  As described in the jacket cover, the book examines “the hubris of meritocracy among the winners and the harsh judgment on those left behind.”  I think he does a good job of making his case.  His analysis of the admissions policies at our Ivy League institutions and the “sorting machine” that is the SAT are on target.  He also has keen observations of our leaders including Barack Obama and Donald Trump. His conclusion is that for the sake of our democracy, freedoms and fair-play, we must rethink the attitudes towards success and failure that have accompanied globalization and unchecked inequality.

I strongly recommend it if you are at all concerned about how our meritocracy has been at the root of elitism in our country, much of it to the detriment of common folks.

Below is a review that appeared in  The New York Times.

What’s Wrong With the Meritocracy

The Tyranny of Merit:
What’s Become of the Common Good?

In an eighth-grade math class at Pacific Palisades junior high in the late 1960s, Michael J. Sandel’s teacher seated students in precise order according to their grades. As their G.P.A.s shifted with the dramatically announced results of every quiz, so did the seating. “I typically shuttled between the second desk and the fourth or fifth,” Sandel recalls, and at age 14, “I thought this was how school worked.”

“The Tyranny of Merit” is like a brilliant response to that misguided but well-meaning math teacher from the viewpoint, as it were, of a kid in some back-row seat of any classroom in a Rust Belt, prairie town or inner-city school in America. What do grades and degrees tell us, Sandel asks, about the widening gap between rich and poor, proud and humiliated, trusting and suspicious, opponent and devotee of Donald Trump?

Some have called Sandel a “rock star moralist.” Without guitar or shiny shirt, the soft-toned but hard-hitting Harvard philosophy professor has packed St. Paul’s Cathedral in London, the Sydney Opera House in Australia and a 14,000-seat outdoor stadium in Seoul, South Korea.

One reason, perhaps, is that many of us need what he does so well: help us grapple with the unexpected and uncomfortable questions that history delivers us. Is it OK for parents to try to make a genetically perfect child (“The Case Against Perfection: Ethics in the Age of Genetic Engineering”)? Is it OK to pay your kid to read (“What Money Can’t Buy: The Moral Limits of Markets”)? Now, in his new book, he asks: Is it OK to claim that our fine grades and degrees are all our own doing, so that we owe little or nothing in return?

What, he wonders, if the highly educated harden into a hereditary aristocracy? And what if this occurs under a flag of fairness, during a time when B.A.s and higher degrees are ever more closely tied to income and prestige? Let’s set aside the case of rich parents who bribe corrupt officials or donate huge sums to get their child into a good college. Let’s focus instead, Sandel writes, on the inequity that creeps in without breaking any rules. At Princeton and Yale, for example, more students come from families in the top 1 percent of income than from the bottom 60 percent. Two-thirds of students in all the Ivy League schools come from families in the top 20 percent. This is very largely because of the head start woven into upper-income life itself: engaging dinner conversation, better schools, private tutors, foreign travel.

Sandel is not about guilt-tripping anxious parents of front-row kids; they’re suffering too, he says. But the credentialed have come to imagine themselves as smarter, wiser, more tolerant — and therefore more deserving of recognition and respect — than the noncredentialed. One reason for this, he suggests, lies in our American “rhetoric of rising.” Both rich and poor parents tell their kids, if you try hard enough, you can achieve your goals. For the upper strata, things may work out, but for the downwardly mobile blue collar and poor, there’s a Catch-22. If they fail to reach their goals — which a torpid economy almost guarantees — they blame themselves. If only I could have gotten that degree, they say. Even the poorly educated, Sandel notes, look down on the poorly educated.

Donald Trump has reached out to this group with open arms — “I love the poorly educated.” He has harvested their demoralization, their grief and their shame, most certainly if they are white. But, Sandel notes, two-thirds of all American adults lack four-year degrees. And in the wake of automation, in real wages, the white man without a B.A. earns less now than he did in 1979. The dignity of his labor has steeply declined. And since 1965, high-school-educated men in the very prime of life — 25 to 54 — have been slipping out of the labor force, from 98 percent in 1965 to 85 percent in 2015. Of all Americans whose highest degree is a high school diploma, in 2017 only 68 percent worked. And with rising deaths of despair, many are giving up on life itself. So you who are highly educated, Sandel concludes, should understand that you’re contributing to a resentment fueling the toxic politics you deplore. Respect the vast diversity of talents and contributions others make to this nation. Empathize with the undeserved shame of the less educated. Eat a little humble pie.

But we are left with an important issue Sandel does not address: the targeting by the right wing of colleges themselves. This isn’t new: Running parallel to the rise of the meritocracy in America has been a suspicion of the egghead who can’t skin a rabbit, build a house or change a tire. As the historian Richard Hofstadter observed in “Anti-Intellectualism in American Life,” and Tocqueville before him, many Americans have valued not simply the cultivated intelligence of heroes in a culture of merit but also the creative genius of the “common man” in a culture of survival.

Today this has taken a shockingly partisan turn. For the first time in recent history, the less education you have, the more you lean right and distrust higher education itself. In a 2019 Pew survey, 59 percent of Republicans (and Republican-leaning independents) agree that “colleges have a negative effect on the way things are going in the country these days,” whereas only 18 percent of Democrats (and those leaning left) agree.

So now’s a good time for both sides to sit down for a very serious talk, with “The Tyranny of Merit” required reading for all. And invited from inner-city, suburban and rural schools across the land should be those who warmed seats both in the front row and in the back.