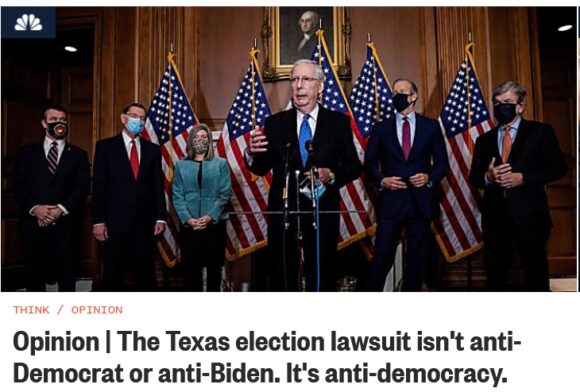 Jim Rutenberg and Nick Corasaniti have a featured article in today’s New York Times entitled, ‘An Indelible Stain’: How the G.O.P. Tried to Topple a Pillar of Democracy.  I think the title is too gentle.  What the 126 G.O.P. House members and 18 attorneys general who chose to side with Mr. Trump over the democratic process and signed onto the embarrassing lawsuit brought before the U.S. Supreme Court contesting the Trump’s loss in the presidential election was nothing short of disgraceful.  They are a cowardly group of politicians who put themselves and their party ahead of the country and its most cherished democratic values.  Here is an excerpt from the article.

“The Supreme Court repudiation of President Trump’s desperate bid for a second term not only shredded his effort to overturn the will of voters: It also was a blunt rebuke to Republican leaders in Congress and the states who were willing to damage American democracy by embracing a partisan power grab over a free and fair election.

The court’s decision on Friday night, an inflection point after weeks of legal flailing by Mr. Trump and ahead of the Electoral College vote for President-elect Joseph R. Biden Jr. on Monday, leaves the president’s party in an extraordinary position. Through their explicit endorsements or complicity of silence, much of the G.O.P. leadership now shares responsibility for the quixotic attempt to ignore the nation’s founding principles and engineer a different verdict from the one voters cast in November.

Many regular Republicans supported this effort, too — a sign that Mr. Trump has not just bent the party to his will, but pressed a mainstay of American politics for nearly two centuries into the service of overturning an election outcome and assaulting public faith in the electoral system. The G.O.P. sought to undo the vote by such spurious means that the Supreme Court quickly rejected the argument.

Even some Republican leaders delivered a withering assessment of the 126 G.O.P. House members and 18 attorneys general who chose to side with Mr. Trump over the democratic process, by backing a lawsuit that asked the Supreme Court to throw out some 20 million votes in four key states that cemented the president’s loss.

“The act itself by the 126 members of the United States House of Representatives, is an affront to the country,” said Michael Steele, the former chairman of the Republican National Committee. “It’s an offense to the Constitution and it leaves an indelible stain that will be hard for these 126 members to wipe off their political skin for a long time to come.”

Speaking on CNN on Friday, Gov. Chris Sununu of New Hampshire, a Republican, said, “What happened with the Supreme Court, that’s kind of it, where they’ve kind of exhausted all the legal challenges; we’ve got to move on.” It was time, he said, for Congress to “actually do something for the American people, surrounding the vaccines, surrounding Covid.”

With direct buy-in from senior officials like Senator Lindsey Graham of South Carolina and the Republican leader in the House, Representative Kevin McCarthy of California, the president’s effort required the party to promote false theory upon unsubstantiated claim upon outright lie about unproved, widespread fraud — in an election that Republican and Democratic election officials agreed was notably smooth given the challenges of the pandemic.

And it meant that Republican leaders now stand for a new notion: that the final decisions of voters can be challenged without a basis in fact if the results are not to the liking of the losing side, running counter to decades of work by the United States to convince developing nations that peaceful transfers of power are key to any freely elected government’s credibility…”

Tom Rath, a former Republican attorney general of New Hampshire, who opposed his party’s effort at the Supreme Court, lamented  “It’s very unfortunate,’’ he said, “that some people tried to live off chaos, perpetuate it and make it even more difficult for the average citizen to trust what government’s doing.”

Mr. Rath, who advised the presidential campaigns of George W. Bush and Mitt Romney, added, “We’re in a very bad place as a party.’’