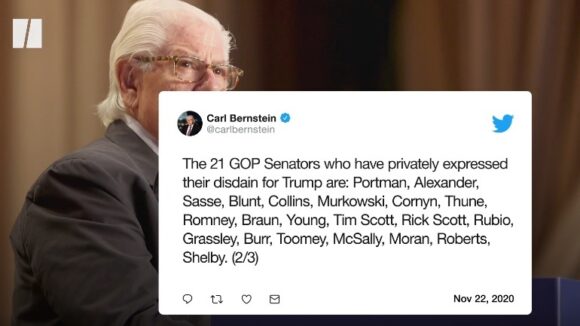 As Trump continued to try to subvert the results of a presidential election he clearly lost to Joe Biden, Bernstein said on Twitter (see post above) he was “not violating any pledge of journalistic confidentially [sic]”.

Then he named names.

The list contained senior Republican figures such as Thune, the majority whip; Rubio, acting chair of the intelligence committee; and Grassley, a former judiciary committee chair.

Some on Bernstein’s list, Sasse, Cornyn, Collins and Murkowski among them, have criticized Trump publicly. Romney, Rubio, Murkowski, Toomey and Collins have recognized Biden as president-elect.

Bernstein, 76, worked with Bob Woodward on the Washington Post’s coverage of the Watergate scandal, which led to the resignation of Richard Nixon in 1974.

Woodward’s coverage of Trump has produced two bestselling books, Fear and Rage, which have relied on unnamed sources highly critical of Trump – and, in the latter case, the president’s own on-record and highly damaging thoughts.

Speaking to CNN on Friday, Bernstein said: “Many, if not most, of these individuals, from what I have been told, were happy to see Donald Trump defeated in this election as long as the Senate could be controlled by the Republicans.”

He went on to say that with few exceptions, their craven public silence has helped enable Trump’s most grievous conduct—including undermining and discrediting the US the electoral system.