BBC/PBS NOVA recently aired two documentaries (see above trailer)  highlighting written communication as one of the greatest inventions in human history.  The first documentary examines the development of the alphabet.  It is an incredible presentation of how the letters of the alphabet evolved from the hieroglyphs of ancient Egypt, China and the Sinai Peninsula to Phoenicia, Greece and Rome.  For example, it shows how the letter “A” started as a hieroglyph symbol for a bull.  It takes the viewer to the ruins of Serabit El-Khadim on the Sinai Penisula where one of the first alphabets was  depicted on its walls somewhere between 1850 BC and 1550 BC.

The second documentary examines the development of writing implements such as pens and paper to the invention of movable type and the printing press.  It shows how papyrus, parchment and paper were actually made. There is also interesting commentary on the importance of Johannes Gutenberg’s decision to print the Bible as his first commercial book. Prior to the printing press an illuminated book might cost as much as the price of a house.  The vast majority of people at the time, if they could read, could never afford to buy a book so providing something  as popular as the Bible might excite them enough to buy it at a reasonable cost.

In sum, I found both documentaries an education.

They are available for free viewing at the NOVA website:

Alphabet A to Z:  https://www.pbs.org/wgbh/nova/video/a-to-z-the-first-alphabet/

How Writing Changed the World: https://www.pbs.org/wgbh/nova/video/a-to-z-how-writing-changed-the-world/

Below is a review that appeared in last week’s Science. 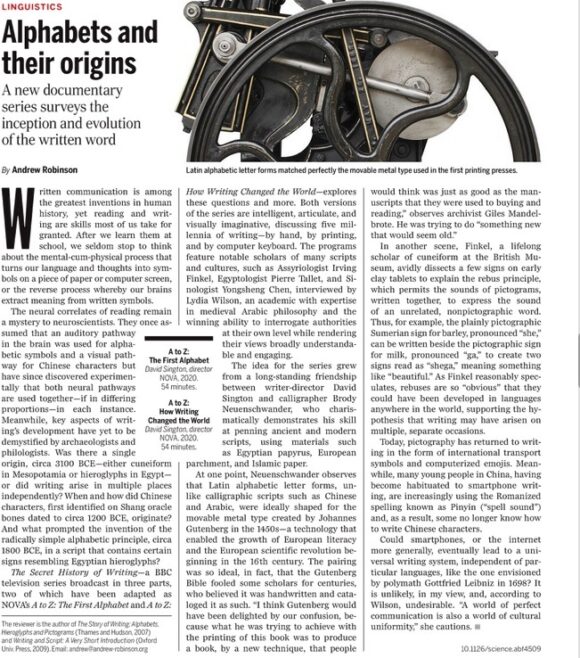