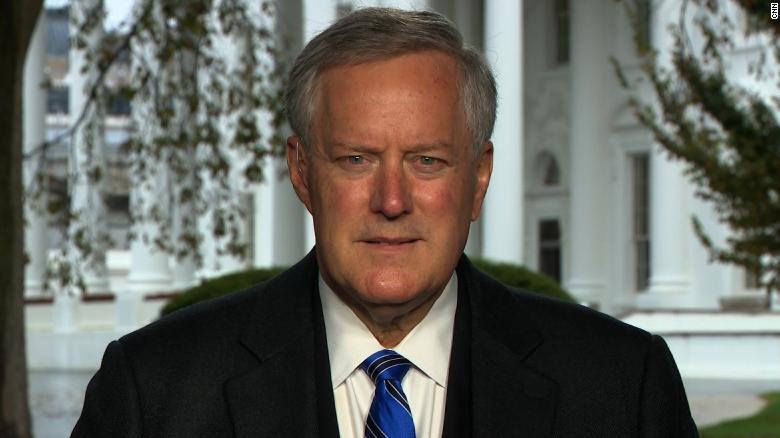 Finally, someone in Donald Trump’s inner circle has told the truth about the coronavirus pandemic.  White House chief of staff Mark Meadows said yesterday:  “We are not going to control the pandemic. We are going to control the fact that we get vaccines, therapeutics and other mitigation areas.” Meadows’ remarks came during an interview with CNN’s Jake Tapper.

The comments from President Donald Trump’s chief of staff come as coronavirus cases surge across the US and the administration continues to consistently disregard advice from government health experts to wear masks, social distance and avoid large gatherings as a way to curb the spread of the virus. The White House is also facing a potential second outbreak of the virus after at least five people on Vice President Mike Pence’s staff  have tested positive in recent days, according to a source familiar with the situation.

Pressed by Tapper on why the US isn’t going to get the pandemic under control, Meadows said: “Because it is a contagious virus just like the flu.” He added that the Trump administration is “making efforts to contain it.”

“What we need to do is make sure that we have the proper mitigation factors, whether it’s therapies or vaccines or treatments to make sure that people don’t die from this,” Meadows said.

The US reported its second-highest day of new cases on Saturday, with nearly 84,000 Americans contracting the deadly virus. As of Sunday, there were at least 8,575,000 total cases of coronavirus in the US, and at least 224,800 Americans have died from the virus, according to Johns Hopkins University.

The concession from President Donald Trump’s top aide was quickly criticized by congressional Democrats and some Republicans, as well as Biden’s campaign.

“This wasn’t a slip by Meadows,” Biden said in a statement on Sunday. “It was a candid acknowledgment of what President Trump’s strategy has clearly been from the beginning of this crisis: to wave the white flag of defeat and hope that by ignoring it, the virus would simply go away. It hasn’t, and it won’t.”

Meadows insisted today that the “full context” of his remarks referred to the “need to make sure that we have therapeutics and vaccines” to treat Covid-19. He also said that administration officials were “very hopeful, based on a number of conversations, that vaccines are just a few weeks away, and we’re in preparation for that.”

But public health experts have warned that a coronavirus vaccine likely will not be widely accessible until the second half of 2021. And even if a vaccine is authorized on a narrow basis for a subset of health care workers and vulnerable Americans, several leading candidates require two doses that would be administered weeks apart.

Thank you, Mr. Meadows for your honesty.  Please discuss this approach with your boss!