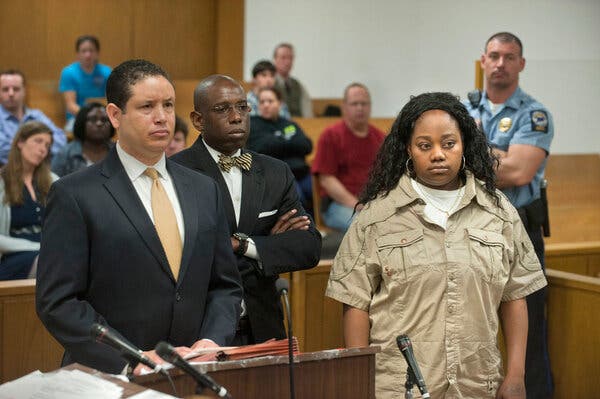 Tanya McDowell went to prison in part for misleading officials so her son could go to a better school.

Nicholas Kristof has column this morning that asks the question who is the bigger tax cheat:  A lady who lies to get her son in a better school or a man in the White House who deducts $70,000. for hair styling?   Kristof compares the plight of a homeless African-American woman named Tanya McDowell who was sentenced to five years in prison for misleading officials so her young son could get into a better school district in Connecticut and President Trump who claimed $70,000 in dubious tax deductions.

Kristof concludes:  “The bottom line: We imprisoned the homeless tax cheat for trying to get her son a decent education, and we elevated the self-entitled rich guy with an army of lawyers and accountants so that he could monetize the White House as well. (Trump properties have charged the Secret Service enormous sums for hotel rooms and other fees while agents were protecting Trump.)

The larger point is not that Trump is a con artist, although he is, but that the entire tax system is a con. The proper reaction to the revelations about Trump’s taxes is not to fume at the president — although that’s merited — but to demand far-reaching changes in the tax code.

I would add that we need changes to a judicial system that favors those with access to good lawyers who can drag cases on for years or more that end up in acquittals or slap on the wrist monetary payments that are drops in the bucket for the rich in this country.

Kristof’s entire column is below.

Who’s the Tax Cheat: The Lady in Jail or the Man in the White House?

While reading that President Trump had claimed $70,000 in highly dubious tax deductions for hair styling for his television show, I kept thinking about a homeless African-American woman named Tanya McDowell who was imprisoned for misleading officials to get her young son into a better school district.

McDowell was sentenced to five years in prison in 2012, in part for drug offenses and in part for “larceny” because she had claimed her babysitter’s address so her son could attend a better school in Connecticut.

In some sense both Trump and McDowell appear to have cheated on their taxes. McDowell sent her son to a school district without paying taxes there. And according to The Times’s extraordinary reporting, Trump may have illegitimately claimed a $72.9 million refund that the I.R.S. is now trying to recover.

In addition, my ace Times colleague James B. Stewart reported that hair styling is not a deductible expense and that, in any case, Trump’s hair expenses for his “Apprentice” TV shows should have been reimbursed by NBC — in which case Trump may have committed criminal tax fraud.

The bottom line: We imprisoned the homeless tax cheat for trying to get her son a decent education, and we elevated the self-entitled rich guy with an army of lawyers and accountants so that he could monetize the White House as well. (Sure enough, Trump properties then charged the Secret Service enormous sums for hotel rooms and other fees while agents were protecting Trump.)

The larger point is not that Trump is a con artist, although he is, but that the entire tax system is a con. The proper reaction to the revelations about Trump’s taxes is not to fume at the president — although that’s merited — but to demand far-reaching changes in the tax code.

We interrupt this column for a quiz question: What county in the United States has the highest rate of tax audits?

The answer is Humphreys County in rural Mississippi, where three-quarters of the population is Black and more than one-third lives below the poverty line, according to ProPublica and Tax Notes. Tax collectors go after Humphreys County, where the median annual household income is $28,500, because the government targets audits on poor families using the earned-income tax credit, an antipoverty program, rather than on real estate tycoons who pay their daughters (that’s you, Ivanka!) questionable consulting fees to reduce taxes.

The five counties with the highest audit rates in the United States, according to Tax Notes, are all predominately African-American counties in the South.

Meanwhile, zillionaires claim enormous tax deductions for donating expensive art to their own private “museums” located on their own property. That’s the kind of scam that works if you’re a billionaire, but not so well if you’re my old friend Mike, who is homeless and once gave his food stamp card to a friend to buy groceries for him. The government responded by suspending Mike’s food stamps.

Tax cheats thrive because Congress has slashed the I.R.S. budget, so that the risk of audits for people earning more than $1 million per year plunged by 81 percent from 2011 to 2019. The I.R.S. has opened audits on only 0.03 percent of returns reporting income of more than $10 million in 2018 (that percentage probably will rise), according to the Center for American Progress.

Need more evidence of systemic unfairness? Trump is still holding on to the almost $73 million that he appears to have bilked out of the I.R.S. a decade ago, even though the I.R.S. is contesting his maneuvers. For wealthy people like Trump, taxes become something like a long negotiation.

An undocumented immigrant housekeeper who had worked for the Trump Organization posted tax statements on Twitter showing that she had paid more federal income taxes than Trump himself had in many years. And by one estimate, the failure of wealthy Americans to pay their fair share forces everyone else to pay an extra 15 percent in taxes.

At the same time, almost one-fifth of American families with children report that they can’t afford to give their kids enough food.

A starting point for a fairer system would be auditing the wealthy as aggressively as impoverished Black workers in rural Mississippi. The economists Natasha Sarin and Lawrence Summers estimate that 70 percent of tax underpayment is by the top 1 percent and conclude that tougher enforcement by the I.R.S. could raise $1 trillion over a decade.

Investing in the I.R.S. to go after rich tax cheats not only promotes fairness but also pays for itself: Each additional dollar spent on enforcement brings in about $24.

Remember Leona Helmsley, the wealthy hotel owner who was prosecuted for cheating on her taxes? She sadly had a point when she reportedly scoffed: “We don’t pay taxes. Only the little people pay taxes.”

On the bright side, Helmsley ended up in prison. I generally believe that in America we over-incarcerate, but I’m appalled that we treat a man with a gilded life and $70,000 in hair styling deductions more gently than a mom who cheats to try to give her son a better future.