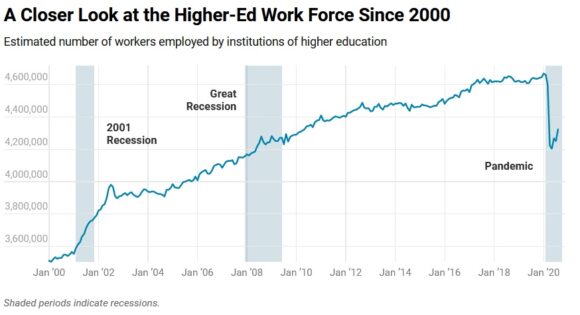 Courtesy of The Chronicle of Higher Education

The Chronicle of Higher Education had an article yesterday describing the losses in the higher education workforce due to the coronavirus pandemic.  Seven percent or 337,000 individuals have lost their positions since March 2020.  Here is an excerpt:

“The work-force that serves much of higher education in America has shrunk by at least 7 percent since Covid-19 arrived on American shores — a staggering, unprecedented contraction, according to federal data. And like the national economic downturn that is running parallel to this unprecedented viral outbreak, much also remains uncertain about what a “recovery” will actually look like for higher education.

An estimated 337,000 fewer workers were employed by America’s private (not-for-profit and for-profit) and state-controlled institutions of higher education in August compared to February, according to a release by the U.S. Bureau of Labor Statistics, which calculates industry-specific employee estimates each month. At no point since the bureau began keeping industry tallies in the late 1950s have colleges and universities ever shed so many employees at such an incredible rate.

… The worst month for job losses in higher education was recorded in May 2020, when the bureau estimated that 457,000 fewer people were employed in the sector relative to February. At that point, higher ed’s estimated work force had been reduced by 9.81 percent since February.

… It’s impossible to know yet which classes of employees in higher education have been or will be most affected by job losses.

Many colleges have moved to eliminate certain sports programs, like swimming and tennis. Other universities and colleges have cut traditional liberal-arts programs such as language studies and sociology.

Furloughs, layoffs, and contract nonrenewals continue to make the careers of adjuncts and contingent faculty members as perilous as ever. Even the job stability associated with tenure-track and tenured faculty members has been threatened as some institutions, like the University of Akron, invoke clauses within faculty contracts that supersede those protections.

While the industry in the coming months and years may recover the number of jobs it has lost, some of the types of jobs that have vanished are unlikely to return.”

It is my opinion that it will take years for the job market in higher education to return to pre-coronavirus levels.