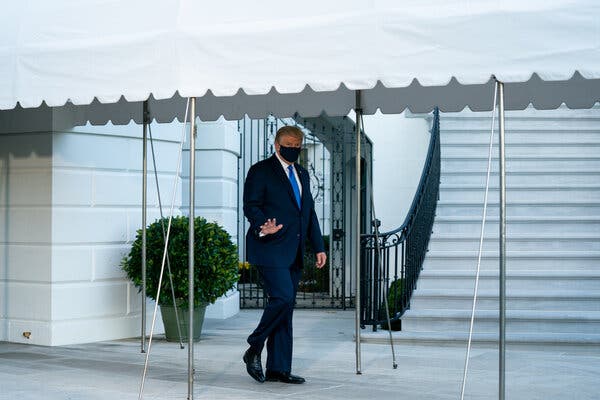 President Trump was hospitalized last night  experiencing what aides called coughing, congestion and fever due to coronavirus.  His hospitalization throws the nation’s leadership into uncertainty and destabilizes his presidential campaign only 32 days before the election.

As reported by The New York Times, no one could say for sure when the president was infected, but the White House medical unit was focused on his ceremony in the Rose Garden last Saturday where he announced his nomination of Judge Amy Coney Barrett for the Supreme Court, an event where many officials and guests mingled without masks and without keeping distance.

Several guests and reporters who were present or traveled with the president on Air Force One later that evening tested positive on Friday, including Senators Mike Lee of Utah and Thom Tillis of North Carolina, both Republicans; the Rev. John I. Jenkins, the president of University of Notre Dame; Kellyanne Conway, the president’s former counselor; and Michael D. Shear, a White House correspondent for The New York Times.

Dr. Sean P. Conley, the president’s physician, said in a statement that Mr. Trump, while still at the White House, received a single 8-gram dose of polyclonal antibody cocktail while also taking zinc, vitamin D, melatonin, aspirin and famotidine, a heartburn medicine. But Walter Reed has equipment that would allow better monitoring of his condition and a quick response if he has trouble breathing or experiences other symptoms.

Hours later, shortly before midnight, Dr. Conley said in a new statement that Mr. Trump was “doing very well” and “not requiring any supplemental oxygen,” but was put on remdesivir, an antiviral drug that has hastened the recovery of some coronavirus patients…

…Dr. David A. Nace, a geriatrics expert and the director of medical affairs at the University of Pittsburgh Medical Center’s network of 35 nursing facilities, said in an interview yesterday that people who do not wear masks are exposed to higher concentrations of the virus, which can worsen the course of the disease.

About 5 to 15 percent of men in their mid-70s die from the virus, Dr. Nace said, although Mr. Trump will obviously benefit from excellent medical care and from the increased knowledge about how to treat patients. “My big fear is that he probably had a greater exposure,” Dr. Nace said. “Right now, he’s doing fine, but we’re early in this, and if that’s the case, we really have to watch him in the next two weeks.”

Even assuming Mr. Trump recovers quickly, it could be weeks before he is able to return to a full public life, calling into question the future of his already-faltering campaign for a second term. Trailing Mr. Biden by a significant margin in most polls, the president had been trying to change the subject from the pandemic, a goal that may now prove even more elusive.

We wish the President a full recovery!