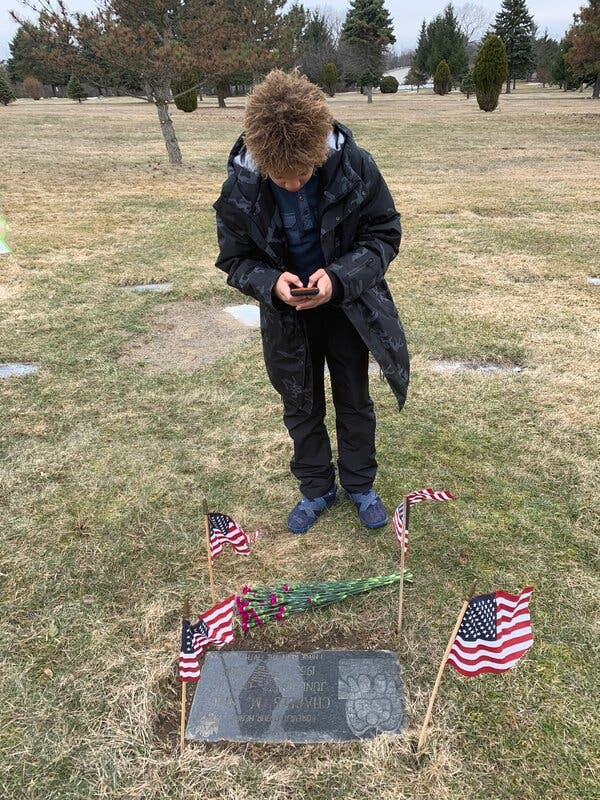 Dana Canedy, a former New York Times journalist and the author of A Journal for Jordan, has an op-ed today responding to Donald Trump’s comments referring to World War I American casualties as “losers and suckers’ that appeared in The Atlantic  on Thursday.  She says that “her son, Jordan, lost his father in Iraq. He knows his father was a warrior and a patriot. But the words hurt nevertheless.”

Below is the entire op-ed.

Read it and remember that the person who spoke of our war dead as “losers and suckers” is in the White House and is running for re-election.

I struggled for the words to comfort Jordan, my 14-year-old son.

He had come into my room and heard a snippet of a news report that President Trump had called fallen soldiers “suckers” and “losers” — soldiers like Jordan’s father and my fiancé, First Sgt. Charles Monroe King. He was killed in Iraq in October 2006, when Jordan was 6 months old.

“Mom, is he talking about my dad?” Jordan asked, his eyes searching and his forehead furrowed in confusion.

My son reads me well, and so it took every ounce of my strength not to physically react. “What do we care what anyone thinks,” I said and made a swatting gesture. “We know the truth about your dad’s heroism.”

I have spent Jordan’s childhood filling in the blanks, making sure that he knew his father, as a soldier and as a man. But I had never expected that I would need to remind my son of his dad’s honor and sacrifice.

I had tried to shield Jordan from this news, which broke in The Atlantic on Thursday, while working through my own anger and pain — sensations so palpable that I became nauseated and short of breath. I thought, too, about all the other Gold Star families who must be confused and hurt by even the possibility that the president had made those insulting and incendiary remarks.

Still, I tried hard to ignore the emotions stirring so viscerally within me, telling myself that President Trump knew nothing of my brave, sweet, humble soldier.

“Don’t lean in to this latest loop on the Trump roller coaster,” I told myself. “It never stops.”

But then my son had popped into my room before I could grab the remote control and turn off the television. By the next morning, when Jordan brought up Trump again, it became clear how distressed he was.

The statement almost sounded like a question, and my anger boiled over. Even so, I told Jordan that the president had denied making the remarks. He looked at me like I was trying to sell him a bag of air.

Jordan never knew his dad, but in many ways, he knows his father better than many children whose dads are living. That is because Charles took a journal with him to Iraq and wrote to our son, even before he was born.

He filled that journal with 200 pages of wisdom and expressions of love for us. He wrote that he hoped to make us proud with his service to our country. On the last page, he told Jordan that he had written all he could think of — favorite Bible verses, how to choose a wife, lessons in how to be a man — in case he did not make it home.

He had one month left on his tour of duty when he was killed by a roadside bomb. I collapsed onto the hardwood floor when I received the news.

Since then, I have worked hard to create a happy, full life for Jordan and me, and fill in any holes that the journal left. Over the years, when Jordan needed to hear his father’s voice, we pulled out the journal and read from it together. I told him stories about the honor, dignity and leadership of his highly decorated dad’s 19-year career of military service.

I showed him pictures of his dad wearing a chest full of medals, including a Bronze Star and a Purple Heart.

Even as I have tried to make Charles a real presence, Jordan has had to reprocess our loss every time he hits a major developmental milestone. Because we have pictures of the two of them together from the only time they met — when Charles finally took a two-week leave to meet his son — Jordan had always insisted that he had memories of his dad. Then one day about a year ago, he stopped at our front door as he was heading to school when he froze and suddenly started sobbing.

I knew that day was coming. He stayed home from school, and I took the day off from work. Jordan snuggled in bed wearing his father’s dog tags, while I made homemade soup. We talked about his dad.

It is hard enough for Gold Star children to heal from the wound of losing a parent. Never should they have to endure the pain of anyone picking at the scar that eventually forms over it. I can only speak for my boy and myself, and certainly not for other military families, but here is what I would advise President Trump:

Go on television immediately, from the Oval Office, and speak directly to these Gold Star children. If you want, deny that you said those awful things. But tell them you are sorry anyway. Say that no child should ever think that the commander in chief would utter such hurtful lies. Tell them that their mom or dad — or anyone who has made the ultimate sacrifice — is more of a hero than you will ever be. Humble yourself.

If Mr. Trump had it in his heart to extend his empathy to all the Gold Star adults who are suffering as well, that would be great. But he must speak to our children.

As for Jordan, I have used this moment to repeat some of his favorite stories about his dad. He knows that his father broke his big toe in combat during the first gulf war and that, despite the pain, he shoved his foot back in his boot and kept marching.

Jordan knows that when I asked his father about what his duties were in Iraq, he responded, “Everything from making sure my soldiers get their mail to recovering their bodies.” It did not matter whether they were from a blue or a red state.

Jordan knows that his dad missed his birth, because Charles wouldn’t leave Iraq until every soldier he led into combat could come home first. Jordan also knows that this determination ignited one of the biggest fights I ever had with his father, but that now, so many years later, I am proud of him for it — and for our shared sacrifice on behalf of our country.

After I reminded Jordan of all of this, I asked him who he thought had shown more patriotism for the country we love — his father or the man who may well consider him a loser.

“My dad,” he said, and proudly smiled.