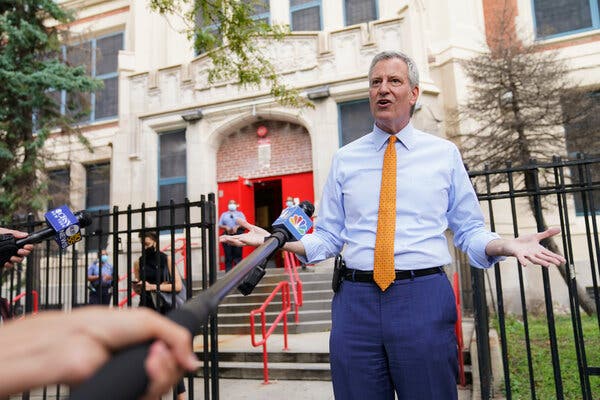 As reported by the New York Times:

“Of all the challenges that Mayor Bill de Blasio faced in his push to reopen the nation’s largest school system in a pandemic, the city’s powerful teachers’ union presented the most formidable obstacle, threatening an illegal strike as soon as this week.

But after a flurry of late-night negotiations, the mayor reached a deal early Tuesday with unions representing teachers and principals, clearing the path for New York City to become the only major school district in America to welcome children back into classrooms this fall.

The development comes after de Blasio emphasized for months that the city’s 1.1 million public school students need schools to resume in-person instruction this fall after the coronavirus abruptly forced a thorny plunge into remote learning in March.

Even as other big U.S. school systems — including Chicago, Los Angeles, Miami and Houston — decided to start the school year with students learning remotely, de Blasio stuck with a plan for a Sept. 10 hybrid reopening that was intended to feature as much classroom time as possible while still allowing for social distancing.

No New York City mayor has faced this much pressure over a single decision in the last century, said Wilbur C. Rich, a professor emeritus at Wellesley College who has written two books on mayoral politics.

“I hope he can pull it off, but I really think that it’s going to be very difficult,” Professor Rich said. “If it collapses on him, that’s going to be his legacy — he’s the guy who sent these kids back to schools.”

White parents are more willing to send their children back into classrooms than parents of color, according to a recent poll conducted by The Education Trust, a research group. About 34 percent of city parents have already decided to keep their children at home full time, and that number is almost certain to climb over the next few weeks…

… Gov. Andrew M. Cuomo said he expected the turbulent experience of colleges — many of which have had to at least temporarily shelve their in-person education plans, following coronavirus outbreaks — to be “replicated” by the state’s schools.

“I think you will see K-to-12, just like colleges, they’ll have a plan, they’ll open, and that you will see a certain number that close,” Mr. Cuomo said.”

I think Governor Cuomo has this right!