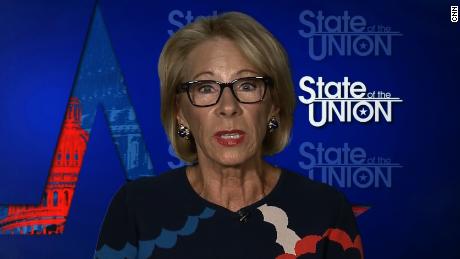 Yesterday I saw two interviews with Education Secretary Betsy DeVos:  one was with Dana Bash on CNN and other with Chris Wallace on Fox News.  In both cases, she was unable or unwilling to answer questions in a straight-forward manner.  She stumbled and bumbled her way through these interviews and made anyone watching questioning why she is in the position she is. To be fair, she was defending the Trump administration’s aggressive push to reopen schools in the fall amid the worsening coronavirus pandemic.  Here is a review courtesy of NBC News.

“Speaking with CNN’s “State of the Union,” DeVos also refused to say whether the Centers for Disease Control and Prevention’s guidelines for schools should be followed uniformly.

“The CDC guidelines are just that, meant to be flexible and meant to be applied as appropriate for the situation,” she said.

Those guidelines state that children meeting in groups “can put everyone at risk,” adding that kids “can pass this virus onto others who have an increased risk of severe illness from COVID-19.” Those guidelines also call for six-feet of social distancing and other measures to decrease the risk of spread.

With coronavirus running rampant throughout much of the southern U.S., where record caseloads and increased hospitalizations are being reported, schools are scrambling to figure out plans for the imminent school year.

Some districts, such as the New York City public schools, are planning on such a hybrid model. In recent days, President Donald Trump and his administration have pressed for schools to fully reopen, with the president claiming that Democrats want schools to stay closed to hurt his election chances. He’s also threatened to withhold money from districts that do not reopen in the fall.

“School leaders across the country need to be making plans to” have students in the classroom, DeVos said. “There will be exceptions to the rule, but the rule should be kids go back to school this fall. And where there are little flare-ups or hotspots, that can be dealt with school by school or a case by case basis. There’s ample opportunity to have kids in school.”

Speaking with ABC’s “This Week,” Assistant Secretary of Health Adm. Brett Giroir said “we have to do this safely but kids not being in school risk their social and emotional health, risk many people with nutrition, the recognition of child abuse, child sexual abuse, it’s really important to get kids physically back in school.”

Of the Trump administration’s guidelines, Giroir said they “tend to be a little bit academic and long,” adding that the administration is working to make additional school guidelines “much more concise so people can really follow them and understand them.”

“This is appalling,” Pelosi said of the push to have kids back in school. “The president and his administration are messing with the health of our children. We all want our children to go back to school. Teachers do. Parents do. And children do. But they must go back safely.”

“And when you hear what the administration is saying, we know they have no appreciation for the failure that has brought us to this point,” she added. “Going back to school presents the biggest risk for the spread of the coronavirus. They ignore science and they ignore governance to make this happen.”

She said the CDC guidelines should be a requirement for schools and said Trump should implement the Defense Production Act to help provide necessary personal protective equipment and testing supplies to school districts.

On NBC’s “Meet the Press,” Alberto Carvalho, superintendent of Florida’s Miami-Dade County Public Schools district, said the district is “going to obviously do our very best in our community considering where the health data currently is.”

“Positivity rate of 29.1 percent. A month ago, it was at 6 percent,” he said of his area. “Our start to the school year is six weeks from now.”

He said that if people follow social distancing guidelines and wear masks, among other measures, “conditions may be appropriate and healthy for students to return to the very best model of teaching and learning, which is in-person.”

“But we need the community’s collaboration, we need the science to drive the practice rather than politics influencing what is legitimately a community concern,” he added.

Dr. Tom Inglesby, director of the Center for Health Security at the Johns Hopkins Bloomberg School of Public Health, told “Fox News Sunday” that issuing an ultimatum for schools to open is wrongheaded.

“Mandating it under a tough timeline is the wrong approach,” he said, adding, “There are going to be many challenges to opening schools safely.”