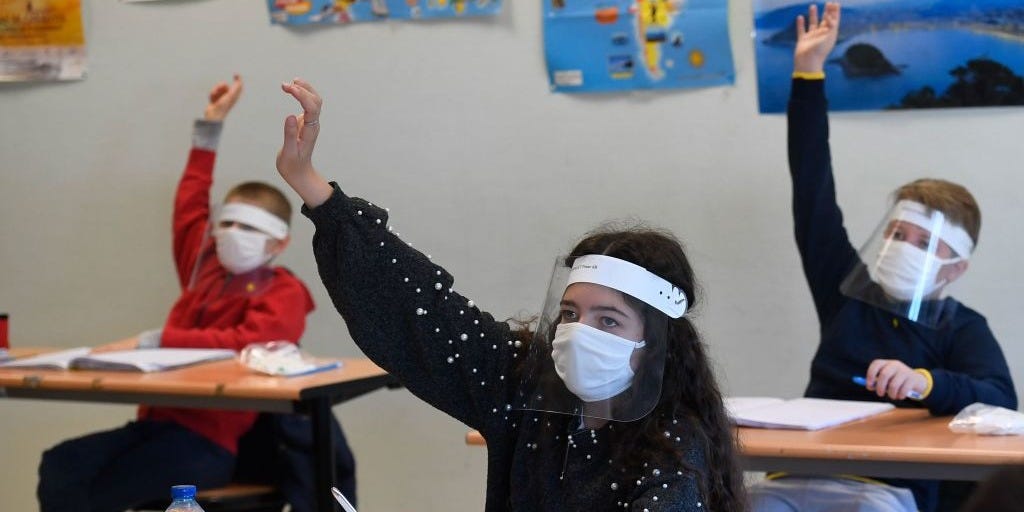 It is July and schools districts around the country are now facing decisions about how to re-open in the fall.  The decisions are being made at the state and local school district levels and there is little consensus.  Here in New York, while some local officials such as NYC Mayor Bill de Blasio has suggested that schools might re-open with at least some form of in-person classes, Governor Andrew Cuomo has stated “not so fast’ and that the decision will be made at the state level. The Associated Press has an article this morning examining how some school districts are facing this decision. Here is an excerpt.

“School districts across America are in the midst of making wrenching decisions over how to resume classes in settings radically altered by the coronavirus pandemic, with school buses running below capacity, virtual learning, outdoor classrooms and quarantine protocols for infected children the new norm.

The plans for the upcoming school year are taking shape by the day, and vary district to district, state to state. The debates have been highly emotional, with tempers flaring among parents and administrators, and have been made all the more vexing by record numbers of COVID-19 cases being reported each day.

In Florida, some school districts want students back in the classroom in early August, even though the virus is surging through communities. On average, Florida has reported more than 7,000 new cases each day recently — more than seven times what it was reporting a month ago.

New Mexico, which has been largely spared major outbreaks, plans a hybrid model of virtual and in-person learning. Parents in New York have demanded schools reopen in the fall. And in Maine, more outdoor learning is planned. Districts nationwide are coming up with various rules for wearing masks. Some want all students to wear them. Others, such as Marion County, Indiana, plan to limit the requirement to older children.

Each of these decisions is fraught, trying to balance health concerns with clawing back as much normalcy as possible. Parents, wrung out after months of juggling full-time work and full-time home schooling, are desperate for help. Children, isolated from their peers, are yearning for social interaction. And everyone, including teachers, is concerned about stepping into the unknown, with so much still uncertain about the virus.

Districts are worried about being able to afford added supplies — including masks and more buses. And school officials said the resurgence of virus cases underway could shatter reopening plans before they’re even put in place.

“If we see large outbreaks happening across communities, it’s going to be very hard to keep schools open,” said Dr. Ashish Jha, director of the Harvard Global Health Institute, on “Fox News Sunday.” “The good news is we think kids transmit less. They are certainly less likely to get sick, but … imagine Arizona right now. If schools were open right now, they would not be able to stay open.”

Aimee Rodriguez Webb, a special education teacher in Cobb County, Georgia, is wrestling with her own health concerns while waiting to hear her district’s plans. She also has a 3 year old.

“I love being in the classroom. And this year I get my own classroom, so I was looking forward to decorating it and all that,” she said. “But then the flip side is … I don’t know that I’m mentally ready to step into the unknown like that.”

Schools around the U.S. shut down suddenly this year as coronavirus cases first began rising. That led to a hodgepodge of distance learning, on-the-fly homeschooling and, for some families, a lack of any school at all. Districts are now turning their focus to how to create more structured environments.

But the debates have been filled with tension. Near Rochester, New York, parents rallied in favor of fully opening schools, holding signs outside an administration building June 29 saying: “No normal school? No school taxes!”

Christina Higley, a parent in the Rochester suburb of Webster, said she started a Facebook group initially to demand answers and have a say in what school would look like, but the discussions there sparked a movement for reopening schools.

“There’s a lot of parents that are saying, `Open our schools, let us have the decision if we feel comfortable sending the children in to them,’” said Higley, whose children just finished kindergarten, third and fifth grade.

The decisions are even more complicated in districts where the case count is rising. In Manatee County, Florida, the working plan is for all elementary students to return to school full time on Aug. 10. Older students would rely on virtual learning while they are phased back into brick-and-mortar schools.

But that proposal isn’t set in stone amid a surge in infections. The county recorded its highest number of new cases in a single day in late June.

If a student tests positive for the virus in the new school year, classrooms or whole buildings would need to be disinfected, said Mike Barber, a district spokesman. Students and staff with confirmed infections wouldn’t be able to return until they had tested negative twice.

Meanwhile, medical experts have expressed concerns for children’s development and mental health. The American Academy of Pediatrics said it “strongly advocates that all policy considerations for the coming school year should start with a goal of having students physically present in school.”

In Cape Elizabeth, Maine, Shael Norris said she’s particularly concerned about children who could face abuse at home and parents who risk losing their jobs to care for their kids. Norris has two children set to attend high school in the fall and runs a nonprofit that combats sexual assault.

“There are so many equally important risks, and we’re focused entirely on COVID,” she said. “But I get it. It’s scary.”

Maine never saw a major outbreak, and it is now reporting, on average, a few dozen cases each day. Still, the state’s largest school district of Portland has left all the options on the table: a full reopening, a partial reopening or fully remote learning.

The district sent a letter to parents that said it plans to use outdoor space when possible — a solution for only a few months a year, given Maine’s weather.

In order to keep kids a safe distance apart on school buses, districts will need more vehicles — an especially thorny issue for rural districts, where students travel vast distances. New Mexico has issued guidelines that buses should be run at 50% capacity, according to Nancy Martira, a spokeswoman for the state Department of Education.

Many districts plan to lean heavily on federal bailout money to pay for their extra transportation needs.

It’s all adding up to an anxious start to the school year.”

To complicate the issue further, while decisions have to be made about how the schools will open in the fall, those that do re-open with in-person classes, have to develop plans for how the schools might have to close again should the coronavirus spread a second wave of infections.