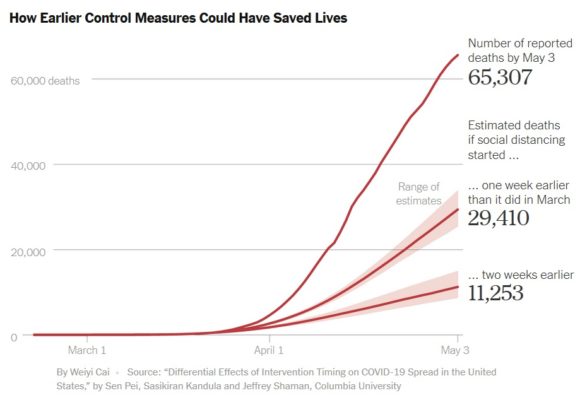 A new model coming out of Columbia University indicates that if the United States had begun imposing social distancing measures one week earlier than it did in March, about 36,000 fewer people would have died in the coronavirus outbreak.  If the country had begun locking down cities and limiting social contact on March 1, two weeks earlier than most people started staying home, the vast majority of the nation’s deaths — about 83 percent — would have been avoided. Under that scenario, about 54,000 fewer people would have died by early May. According to the researchers, the model indicates that even small differences in timing would have prevented the worst exponential growth, which by April had subsumed New York City, New Orleans, Seattle and other major cities. As reported by The New York Times.

“It’s a big, big difference. That small moment in time, catching it in that growth phase, is incredibly critical in reducing the number of deaths,” said Jeffrey Shaman, an epidemiologist at Columbia and the leader of the research team.

The findings are based on infectious disease modeling that gauges how reduced contact between people starting in mid-March slowed transmission of the virus. Dr. Shaman’s team modeled what would have happened if those same changes had taken place one or two weeks earlier and estimated the spread of infections and deaths until May 3.

The results show that as states reopen, outbreaks can easily get out of control unless officials closely monitor infections and immediately clamp down on new flare-ups. And they show that each day that officials waited to impose restrictions in early March came at a great cost.

After Italy and South Korea had started aggressively responding to the virus, President Trump resisted canceling campaign rallies or telling people to stay home or avoid crowds. The risk of the virus to most Americans was very low, he said.

“Nothing is shut down, life & the economy go on,” Mr. Trump tweeted on March 9, suggesting that the flu was worse than the coronavirus. “At this moment there are 546 confirmed cases of CoronaVirus, with 22 deaths. Think about that!”

In fact, tens of thousands of people had already been infected by that point, researchers later estimated. But a lack of widespread testing allowed those infections to go undetected, hiding the urgency of an outbreak that most Americans still identified as a foreign threat.

In a statement released late Wednesday night in response to the new estimates, the White House reiterated Mr. Trump’s assertion that restrictions on travel from China in January and Europe in mid-March slowed the spread of the virus.

On March 16, Mr. Trump urged Americans to limit travel, avoid groups and stay home from school. Bill de Blasio, mayor of New York City, closed the city’s schools on March 15, and Gov. Andrew M. Cuomo issued a stay-at-home order that took effect on March 22. Changes to personal behavior across the country in mid-March slowed the epidemic, a number of disease researchers have found.

But in cities where the virus arrived early and spread quickly, those actions were too late to avoid a calamity.

In the New York metro area alone, 21,800 people had died by May 3. Fewer than 4,300 would have died by then if control measures had been put in place and adopted nationwide just a week earlier, on March 8, the researchers estimated.

All models are only estimates, and it is impossible to know for certain the exact number of people who would have died. But Lauren Ancel Meyers, a University of Texas at Austin epidemiologist who was not involved in the research, said that it “makes a compelling case that even slightly earlier action in New York could have been game changing.”

“This implies that if interventions had occurred two weeks earlier, many Covid-19 deaths and cases would have been prevented by early May, not just in New York City but throughout the U.S.,” Dr. Meyers said.

The fates of specific people cannot be captured by a computer model. But there is a name, a story and a town for every person who was infected and later showed symptoms and died in March and early April.”

Yes!  Those who died were not just numbers on a page or chart but real people whose families and friends were devastated.