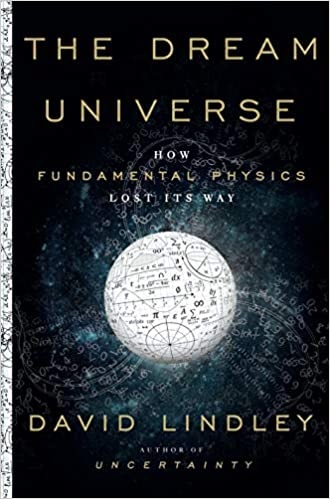 I just finished reading The Dream Universe:  How Fundamental Physics Lost Its Way,  by David Lindley.  This is a thoughtful review of the critical issues in the world of theoretical physics and the author, who himself is a highly-regarded physicist,  takes the reader on a tour of how we have gotten to here in a search for a unified theory of the universe and all things big and small.  He starts with Plato and Aristotle, moves to Copernicus and Galileo, and continues through the pantheon of modern-day theoretical physicists. It is a plea that physicists base their understanding of reality on what they can observe and not on pure thought.  He frowns on those who would use only mathematics to prove their theories and hypotheses.  Lindley gets into the mathematical weeds at times but still his overall message is clear even to those of us without training in the sciences.

I found it an interesting read that provided me with good insight to fundamental questions in the world of physics.  If you are at all disposed, I recommend it.

A review courtesy of Kirkus is below.

HOW FUNDAMENTAL PHYSICS LOST ITS WAY

A striking examination of an important scientific question: “What, exactly, are scholars of fundamental physics today trying to achieve?”

A former editor of Science and Nature, Lindley (Uncertainty: Einstein, Heisenberg, Bohr, and the Struggle for the Soul of Science, 2007, etc.) expressed unhappiness with his profession in The End of Physics (1993). Since then, matters have changed without actually improving, so he returns to the attack. He maintains that today’s theoreticians have reverted to a pre-modern way of thinking that harks back to the ancient Greeks, who are regarded, incorrectly, as the founders of modern science. Led by Plato, they belittled observation because human senses are imperfect. Greek thinkers believed that true knowledge required reason and logic. They also had a profound respect for mathematics, which they did not consider a useful tool but a source of deep insights. “Fundamental physics has [become] a version of philosophy…one that shares with other areas of philosophical inquiry an endless capacity to ask deep questions and an impressive inability ever to answer them.” Lindley makes his case through a fine capsule history of physical science with an emphasis on Galileo, in the opinion of many the first modern scientist. Galileo looked around, wondered about phenomena (do heavy things fall faster than light things?), performed experiments, and calculated. He produced groundbreaking discoveries, as did his followers, from Newton to Maxwell to Einstein to the founders of quantum mechanics. Lindley believes that physics peaked in the 1970s with the development of the standard model, an excellent if imperfect explanation of fundamental particles and forces. Since then, he adds, researchers have attacked still unexplained problems (dark matter, dark energy) with complex mathematics-based systems (supersymmetry, string theory), some of whose predictions are untestable. He joins a minority of colleagues who complain that a 30-year obsession with pure mathematics has reached a dead end, although the physics establishment remains convinced that deep insights are just around the corner. This scientific polemic deserves mention alongside Sabine Hossenfelder’s Lost in Math (2018).

A delightful addition to a widespread, ongoing scientific debate.