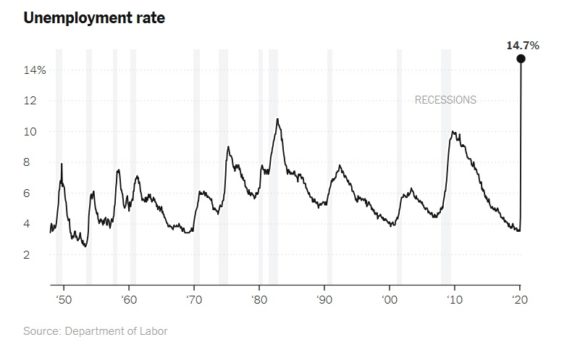 The U.S. unemployment rate rocketed to 14.7% in April, a level last seen during the Great Depression, as 20.5 million jobs vanished in the worst monthly loss on record. It’s stark evidence of how the coronavirus has brought the economy to its knees.

The Labor Department’s monthly report yesterday provided the clearest picture yet of the breadth and depth of the economic damage — and how swiftly it spread — as the coronavirus pandemic swept the country.

Job losses have encompassed the entire economy, affecting every major industry. Areas like leisure and hospitality had the biggest losses in April, but even health care shed more than a million jobs. Low-wage workers, including many women and members of racial and ethnic minorities, have been hit especially hard.  As reported by  the New York Times.

“It’s literally off the charts,” said Michelle Meyer, head of U.S. economics at Bank of America. “What would typically take months or quarters to play out in a recession happened in a matter of weeks this time.”

From almost any vantage point, it was a bleak report. The share of the adult population with a job, at 51.3 percent, was the lowest on record. Nearly 11 million people reported working part time because they couldn’t find full-time work, up from about four million before the pandemic.

If anything, the numbers probably understate the economic distress.

Millions more Americans have filed unemployment claims since the data was collected in mid-April. What’s more, because of issues with the way workers are classified, the Labor Department said the actual unemployment rate last month might have been closer to 20 percent.

It remains possible that the recovery, too, will be swift, and that as the pandemic retreats, businesses that were fundamentally healthy before the virus will reopen, rehire and return more or less to normal. The one bright spot in Friday’s report was that nearly 80 percent of the unemployed said they had been temporarily laid off and expected to return to their jobs in the coming months.

President Trump endorsed this view in an interview Friday morning on Fox News. “Those jobs will all be back, and they’ll be back very soon,” Mr. Trump said, “and next year we’re going to have a phenomenal year.”

But Diane Swonk, chief economist at Grant Thornton, said that such optimism was misplaced, and that many of the jobs could not be recovered.

“This is going to be a hard reality,” Ms. Swonk said. “These furloughs are permanent, not temporary.”

Many businesses have indicated that employees can work from home throughout the summer, hurting sales at downtown restaurants. Meetings and conferences have been put off as well, reducing demand at hotels and other gathering places. And the longer the pandemic lasts, the more businesses will fail, deepening the downturn.

The broad nature of the job cuts, too, means it will take longer for the labor market to recover than if the losses were confined to one or two areas.

“There is no safe place in the labor market right now,” said Martha Gimbel, an economist and labor market expert at Schmidt Futures, a philanthropic initiative. “Once people are unemployed, once they’ve lost their jobs, once their spending has been sucked out of the economy, it takes so long to come back from that.”

Our coronavirus economic recession is evolving into what I dare say is an economic depression.