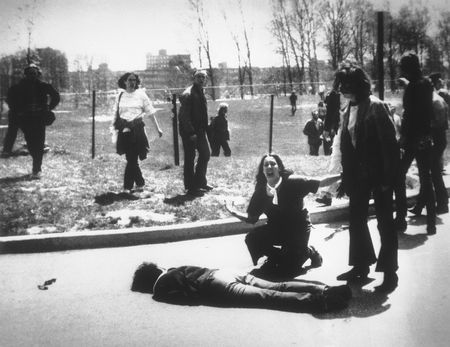 Mary Ann Vecchio gestures and screams as she kneels by the body of a student lying face down on the campus of Kent State University on May 4, 1970. National Guardsmen had fired into a crowd of demonstrators – killing four.

Fifty years ago, on a sunny May 4th, 1970 Monday, students during a war protest faced Ohio National Guardsmen in gas masks on Kent State University’s Commons.  The National Guard opened fire on the unarmed college students killing four and injuring nine others.

The confrontation, sometimes referred to as the May 4 massacre, was a defining moment for a nation sharply divided over the protracted war, in which more than 58,000 Americans died. It sparked a strike of 4 million students across the U.S., temporarily closing some 900 colleges and universities. The events also played a pivotal role, historians argue, in turning public opinion against the conflicts in Southeast Asia.

In the hours immediately after the shootings, reporters at the chaotic scene struggled to determine who had fired the shots and why. Among the theories was that Guard members shot after spotting a sniper, a theory later proved untrue.

Kent State’s campus, about 30 miles (50 kilometers) southeast of downtown Cleveland, will be still on the 50th anniversary Monday. An elaborate multi-day commemoration was canceled because of social distancing restrictions amid the coronavirus pandemic. Some events, activities and resources are being made available online.

It was day that those of us who were on college campuses will never forget.