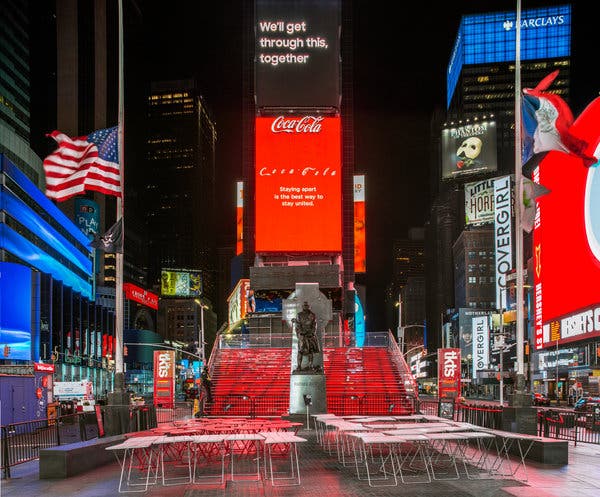 J. David Goodman, a writer and reporter has a featured article in this morning’s New York Times, questioning whether New York City will be able to come back from the coronavirus pandemic. Entitled, ‘I Don’t Think the New York That We Left Will Be Back for Some Years’ takes a pessimistic position that it will be many years before the Big Apple comes back. Here is an excerpt:

“It took just a matter of days to shut down New York City, once the coronavirus took hold. Restarting it will take much, much longer.

The economic impact in the city from the global pandemic has been striking: Hundreds of thousands are already out of work; at least $7.4 billion in tax revenue is projected to be lost by the middle of next year.

And the changes will be felt long after New York begins to reopen its economy.

How New York City, the epicenter of the country’s outbreak, begins to recapture its vibrancy is a question consuming political, business and cultural leaders.

The very features that make New York attractive to businesses, workers and tourists — Broadway, the subway system, world-class restaurants and innumerable cultural institutions — were among the hardest-hit in the pandemic. And they will take the longest to come back.

Half of the hotels in the city are not operating, and with no reliable forecast for when tourists might return, many may stay shut. Nearly the same portion of the city’s smallest businesses — some 186,000 shops employing fewer than 10 people — could fail, city officials fear. Replacing them could take years.

The city’s real estate and construction industries, major drivers of the local economy, have all but stopped. Millions of renters are struggling to make monthly payments, fueling concern over a cascading crisis in the housing market if rent goes unpaid.

White-collar business and financial services companies, whose workers were mostly spared immediate layoffs in the shutdown, are forecast to see declining profits next year, and even losses. Some law firms have already pared down pay.

And with social distancing guidelines likely to be necessary for the foreseeable future, all facets of New York’s work life will take on new rules, routines and costs.

“I don’t think the New York that we left will be back for some years,” said Gregg Bishop, the commissioner of the city’s small businesses agency. “I don’t know if we’ll ever get it back.”

New York is not the only metropolis in the world struggling with how to safely reopen businesses and cultural centers in a dense urban settings, but no city has been more devastated by the pandemic.

The virus has claimed more than 13,000 lives in New York City, a figure that includes roughly 4,400 victims who had never tested positive for the virus but were presumed to have died of it.

President Trump has sought swift reopenings across the United States. And on Monday, three Southern states moved toward doing so: South Carolina allowed retail shops to open with social distancing guidelines, and the governors of Georgia and Tennessee announced plans to soon ease restrictions on businesses.

But in New York City, interviews with more than two dozen business executives, city and state officials and industry groups revealed the depths of the difficulties in doing the same, especially when the coronavirus is still filling hospitals and hundreds are still dying each day.

The city’s Independent Budget Office forecast that 475,000 people would lose their jobs over the next year; other economists have put the job loss far higher: 1.2 million by the end of April, mostly in low-wage jobs in restaurants, retail or transportation.”

I have lived or worked in New York City through the fiscal crisis of the 1970s, the attack on the World Trade Center on September 11, 2001, and the Great Recession of 2008-2009. It took the City a good fifteen years or more to come back from the fiscal crisis.   It took just a few years to come back from 9/11 and the Great Recession.  I don’t know what is going to happen.  Goodman makes some good points in his article but somehow I have faith in our City that it will recover.  The question surely is “when?”

Goodman’s entire article is worth a read!