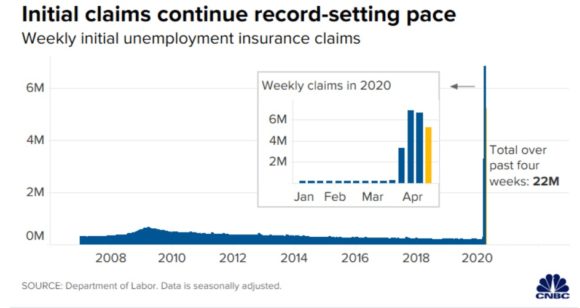 The total weekly claims fell close to 1.4 million from last week’s 6.6 million initial unemployment claims. Economists had been expecting the report to show the ranks of jobless Americans increasing by 5.5 million.

Regardless these claims are still staggering: The one-week record—before the current streak of multi-million claims—was 695,000 in October 1982.  As reported by CNBC News.

“As we fully know the current state of the labor market with mass waves of layoffs, the key question turns to how many of these people will be rehired when the economy starts to reopen,” said Peter Boockvar, chief investment officer at the Bleakley Group. “We can assume it will take a long time for that to happen but hopefully we’re getting closer to at least getting started.”

…Stock market futures actually gained on the news and pointed to a slight gain at the market open.

There was some good news in the data when looking at the numbers not adjusted for seasonal factors, which some economists say is unnecessary given the current unusual conditions.

The unadjusted total was 4.97 million, actually representing a plunge of 20% or more than 1.2 million from the previous week. Seasonal factors actually should have reflected about a 1% gain, according to the Labor Department. A comparable week in 2019 would have shown just 196,364 claims.

Most of the big states showed declines from the previous week in benefit applications, according to unadjusted numbers.

…The total claims of 22.03 million filed since social distancing measures took effect reflects a 13.5% drop in household employment, according to Paul Ashworth, chief U.S. economist at Capital Economics. Ashworth said he expects the April jobless rate to be 15%-20%.

“Nevertheless, we do still expect the unemployment rate to come down much more quickly than during a normal economic recovery, as temporary layoffs return to work once the lockdowns are lifted, so we still wouldn’t characterize this as a depression-type event,” he said.

I hope he is right!