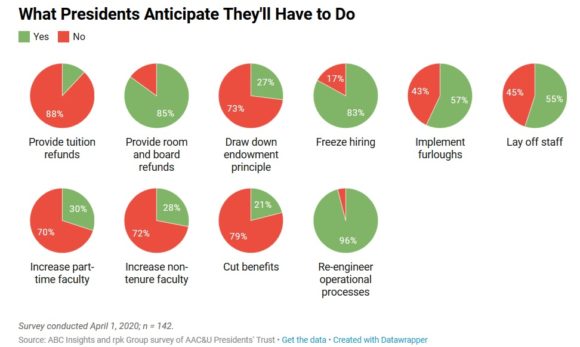 Coronavirus is testing the ability of college and university presidents  to take care of their students and faculty and staff members.  Classes moved to remote delivery, dorms closed, and students sent home. The crisis is already taking a toll on the financial stability of many colleges and universities.

A survey of presidents conducted in late March reveals that 70 percent expect revenue decreases of 10 percent or more on their campuses. As a result, a large majority are freezing hiring, and more than half expect to lay off staff and implement furloughs. Perhaps just as importantly, nearly all presidents say they expect to examine their processes and make changes to how people do their work, academically and administratively.

While the majority of respondents, 64 percent, are optimistic that the coronavirus will generally resolve over the summer and that campuses will return to normalcy in the fall, 36 percent of the presidents think that serious disruption awaits them come September. One president went so far as to suggest that he anticipates his campus remaining in virtual-instruction mode for all of fiscal 2021.

An article in The Chronicle of Higher Education written by Paul N. Friga, a clinical associate professor at the Kenan-Flagler Business School at the University of North Carolina at Chapel Hill and a co-founder of ABC Insights, a consortium of universities working to make higher education more efficient and effective, reviews the survey results.  Here is an excerpt.

“I think that there will be spikes of disruption but regionally specific; online courses and remote work will become much more normal,” predicted one president of a medium-sized public university. “Even if Covid is under control in the summer, there will be a new ‘normal.’ We are planning many scenarios, and even the best case is not back to normal.”

The vast majority of presidents, 84 percent, anticipate a drop in enrollments, both for new and returning students, a development that is particularly worrisome for small private colleges already strained by their dependence on tuition and lack of endowment funds. Even a 10-percent drop in enrollment can be enough to set off dramatic cash shortages at some colleges. Particularly at risk are institutions with higher percentages of international students and students of lower financial means. A typical mitigating factor to enrollment drops during a recession would be increases in unemployment, which could reach more than 30 percent this time around.

“My biggest concern, given drops in enrollments and financial resources, is whether or not we will even be able to open again in the fall,” lamented one leader of a small private college.

A survey conducted by ABC Insights  was sent March 27 to 285 presidents and chancellors who are members of the Presidents’ Trust of the Association of American Colleges & Universities. The survey, a collaboration between the AAC&U and ABC Insights, received 142 responses from presidents with a mix of institutional sizes and types representative of general higher education.

The presidents in this survey seem a bit more optimistic. Only 18 percent said they expected revenue losses greater than 20 percent, though 52 percent expect decreases of revenue between 10 and 20 percent.

So how will universities make up for such potential significant losses of resources? Aside from the federal stimulus funds, which will be critically important to maintaining employment of the approximately four million people who work at colleges and universities, higher-education leaders have two options to pursue.

First, they could increase revenues through increasing enrollments and research grants or spending more of their endowments, which 27 percent of the presidents plan to do. The other option is to cut expenses — both administrative and academic. …

…While most of the leaders in the survey mentioned the strong desire to protect the health and well-being of their students and employees first and foremost, the presidents believe it is time to make changes to personnel levels, since labor represents up to 70 percent of higher education’s costs.

Eighty-three percent plan to immediately implement hiring freezes for the next fiscal year, while 55 percent anticipate layoffs and 57 percent expect to do furloughs. Thirty percent expect to hire more part-time faculty members. Only 21 percent are looking to find ways to cut benefits such as health care, release time, or leave. An amazing 96 percent are planning to re-engineer processes and look for efficiencies related to the higher-education operational model. That likely includes a great expansion of virtual education — for nontraditional as well as traditional students.

…As we look to the future, the presidents in our survey are recognizing the severity of the situation facing higher education; however, they are optimistic their institutions will not only survive but also thrive. Certainly, some college leaders realize that the risk of closure is real, but others commented that if they make the right decisions, they will be better off.

Lynn Pasquerella, president of the AAC&U, states it well as she thinks of her recent conversations with many university and college presidents across the country: “We are likely to see a new world order of higher education — more global, more online, more focus on return on investment, and overall more student-focused.”

I agree with many of the points raised in this article. However, a lot depends upon what resources might flow to the colleges as a result of existing and future stimulus packages.  For private institutions, stimulus funds would flow directly to them.  For public institutions, the budget issues will be integrated with state and local budget issues caused by the pandemic.  The existing stimulus provides relief for expenditures being made to combat coronavirus but does nothing to offset lost revenue. In some states such as New York, Florida, and Nevada with large tourist industries, the revenue loss will be staggering.

I foresee a lot of fiscal pain next year for higher education.