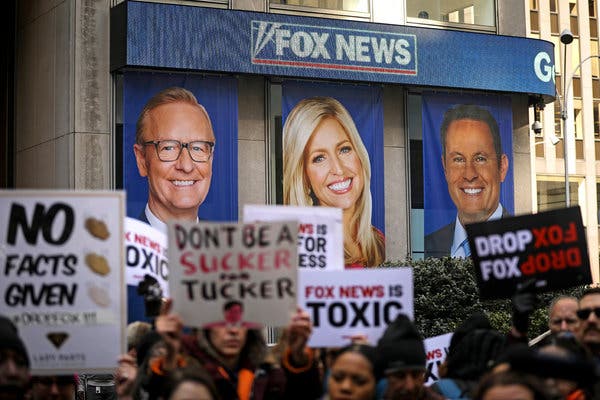 Kara Swisher has an op-ed in today’s New York Times slamming Fox News for spraying its viewers with false information about the coronavirus pandemic.   She views the elderly as victims of the network and sandwiches her commentary by relating her personal experiences with her own mother.  Here is an excerpt.

“As The Times media columnist Ben Smith wrote recently: “Fox failed its viewers and the broader public in ways both revealing and potentially lethal. In particular, Lachlan Murdoch failed to pry its most important voices away from their embrace of the president’s early line: that the virus was not a big threat in the United States.”

That would be the chief executive of the company that owns Fox News, who took over the job from his infamous father, Rupert Murdoch. It was the patriarch who set the table at Fox, and Lachlan is just an apparently lackadaisical butler of the family business, according to Mr. Smith.

Well, not completely. Lachlan Murdoch did dump a B-team player, the Fox Business host Trish Regan, after she called the media attention given to coronavirus “another attempt to impeach the president.”

In Mr. Smith’s column, Fox’s longtime public relations honcho Irena Briganti said that the virus situation “has evolved considerably over the last few weeks.” Presumably that’s an attempt to use a get-out-of-lawsuit-free card by trying to establish that the story has shifted and so has the news organization.

Mistakes were made, pandemic version.

Given the growing number of cases and deaths in the United States, Fox stopped playing down the crisis, a move that closely tracks the rocky evolution in thinking by Mr. Trump. Fox may also seek cover from some early pronunciations from another powerful Fox host, Tucker Carlson. While Mr. Hannity spun the hoax line, Mr. Carlson was quite firmly in the taking-it-seriously camp, urging Mr. Trump to act.

But back then, Mr. Carlson was a lone prominent voice on Fox, and his more grounded views did not break through to my mother in the early days. In this, Fox failed my mother and countless others of its fans. While we can joke all we want about the “Fair and Balanced” motto, it’s a very low bar to simply give your audience decent health information.

Fox News finally got much more serious in its reporting on the coronavirus, as has Mr. Trump. Convinced by experts’ new estimates that millions of Americans would be at risk for infection and hundreds of thousands at risk for dying if he prematurely reopened the country, Mr. Trump and Fox have gone into reverse.”

Better late than never but in this case it may be too little too late.