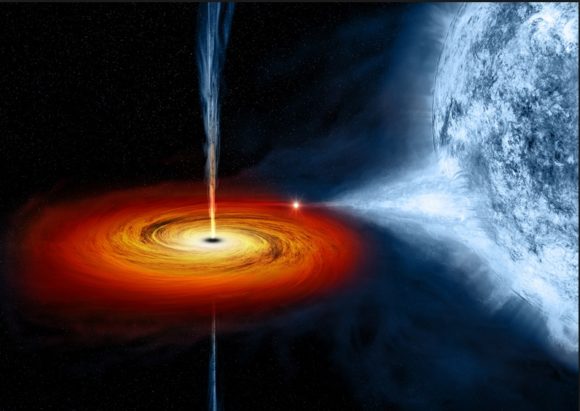 On Saturday, the New York Times in an article entitled, Infinite Visions Were Hiding in the First Black Hole Image’s Rings, reports that scientists at the Harvard-Smithsonian Center for Astrophysics, believe that the light emanating from a black hole provides a window into the entire universe.   When you point a telescope at a black hole, it turns out you don’t just see the swirling sizzling doughnut of doom formed by matter falling in. You can also see the whole universe. Light from an infinite array of distant stars and galaxies can wrap around the black hole like ribbons around a maypole, again and again before coming back to your eye, or your telescope.   Here is the text of the article written by Dennis Overbye.

“A year ago a team of radio astronomers startled the world with the first photograph of a black hole (see below), lurking like the eye of Sauron in the heart of a distant galaxy. Now it appears there was more hiding in that image than we had imagined. 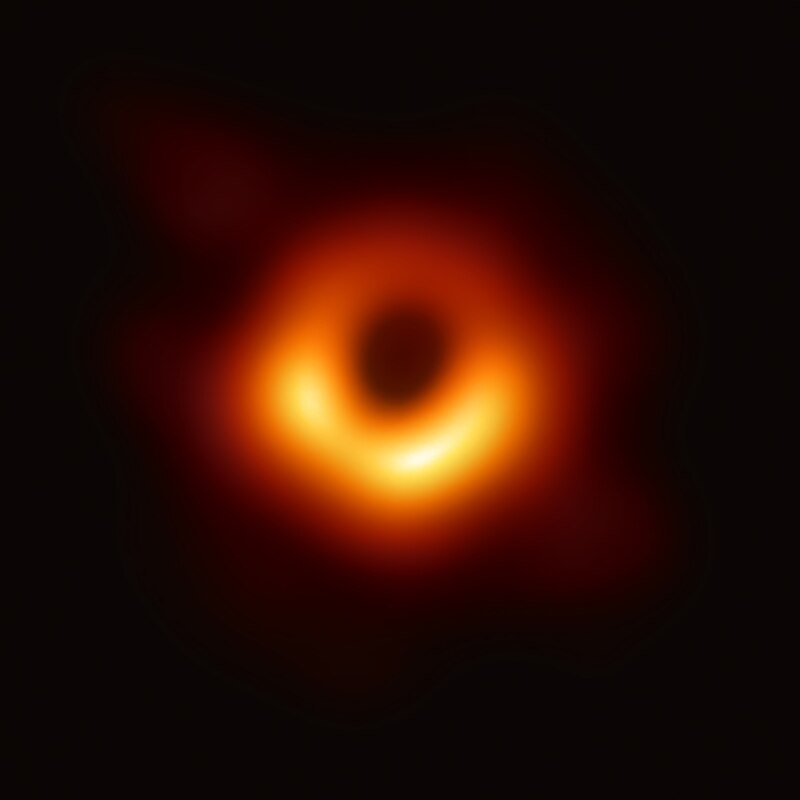 When you point a telescope at a black hole, it turns out you don’t just see the swirling sizzling doughnut of doom formed by matter falling in. You can also see the whole universe. Light from an infinite array of distant stars and galaxies can wrap around the black hole like ribbons around a maypole, again and again before coming back to your eye, or your telescope.

“The image of a black hole actually contains a nested series of rings,” said Michael Johnson of the Harvard-Smithsonian Center for Astrophysics, not unlike the rings that form around your bathtub drain.

Dr. Johnson was lead author of a study, describing the proposed method that would allow our telescopes to pry more secrets from the maw of any black hole, that was published in the March 18 edition of the journal Science Advances. A visualization demonstrating the individual photon rings that make up the first ever image of the supermassive black hole at galaxy M87.CreditCredit…Harvard-Smithsonian Center for Astrophysics

He and other authors of the paper are also members of the team operating the Event Horizon Telescope, a globe-girding network of radio telescopes that made that first image of a black hole. Their telescope saw these rings, but it didn’t have enough resolution to distinguish them, so they were blurred into a single feature.

The work, scientists with the project said, pointed toward new ways to shed light, so to speak, on the properties of black holes, particularly by adding a radio telescope in space to the existing E.H.T. network.

“This paper is, in my professional capacity, very cool!” Shep Doeleman, also of Harvard-Smithsonian and leader of the E.H.T. collaboration, said in an email.

Andrew Strominger, a Harvard theorist and co-author of the paper, said, “Understanding the intricate details of this historic experimental observation has forced theorists like myself to think about black holes in a new way.”

Black holes are potholes in eternity, so massive that they swallow even light. They were an unwelcome prediction of Albert Einstein’s theory of gravity, general relativity. It describes gravity as the warping of space-time by mass and energy. Too much in one place would cause space-time to sag without limit.

Einstein thought that was crazy, but astronomers have found that space is littered with these apocalyptic creatures. There seems to be a supermassive black hole, weighing millions or billions of times more than the Sun, lurking in the center of every galaxy.

The Event Horizon Telescope, named after the edge, the point of no return from a black hole, consisted of eight radio observatories on six mountains and four continents. All that observing power was yoked together by a technique called very-long baseline interferometry, to achieve the resolution of a telescope as big as the Earth. For 10 days in April 2017 they pointed it at the center of the giant galaxy M87 in the Virgo constellation, where there is a black hole as massive as six billion Suns belching tongues of radio fire.

The resultant image of gases heated to billions of degrees swirling around the cosmic drain matched the predictions of Einstein’s theory, as far as anyone can tell. A copy of the telescope’s vision now resides in the permanent photography collection of the Museum of Modern Art in New York.

But the Event Horizon’s work has barely begun, Dr. Doeleman said. For one thing the scientists are trying to make a movie of the supermassive black hole in the center of our own Milky Way galaxy; a summertime attempt was recently called off because of the coronavirus pandemic.

If they could increase the size of their event horizon network by adding an antenna in space, Dr. Doeleman said, they could gain enough resolution to see individual photon rings, as they are called, turning the event horizon into “a true cosmic laboratory for testing our most fundamental theories.”

Dr. Johnson said there were several space radio telescopes on the drawing boards that could fit the bill. One is a Russian mission called Millimetron, which is optimistically hoping to launch in 2029. Another is the Origins Space Telescope, which has been proposed to NASA for a launch in 2035.

Dr. Johnson said astronomers don’t know the mass of the M7 black hole they revealed last year to better than 10 percent accuracy, nor do they know if and how fast it is spinning. A space mission with a radio antenna would allow them to see the ring structure and determine the M87’s mass to an accuracy of a fraction of a percent, and could estimate its spin.

All this if Einstein was right, he added. Other theories of gravity and other types of compact objects (wormholes, naked singularities, boson stars) would suggest a very different ring structure.

“So this is a way of studying exactly what lies at the centers of galaxies, in a way that we can never learn from larger scale measurements such as the orbits of stars or gas,” Dr. Johnson said.

This is impressive science!