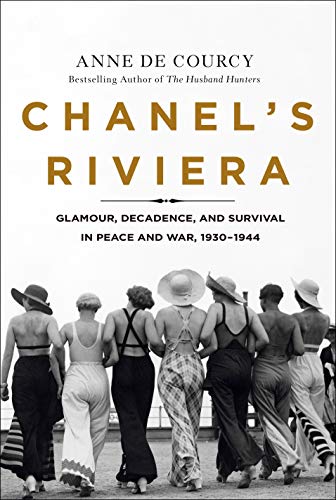 I just finished reading Chanel’s Riviera: Life, Love & the Struggle for Survival on the Côte d’Azur, 1930–1944 by Anne de Courcy.  It provides a most interesting view of life on the southern coast of France during two critical periods of the 20th century, namely the Great Depression and World War II.   Ms. de Courcy covers these periods through the lives of the rich and powerful namely Coco Chanel and her friends who live in luxury on the French Riviera while the rest of the world struggled economically, only to see much of it come crashing down with the Nazi movement in Germany and World War II.  In addition to Chanel, there are stories about the likes of Winston Churchill, the Duke of Windsor,  Pablo Picasso, Aldous Huxley and others.  Chanel’s own life is an interesting story of survival.  She was an orphan  at a very young age but ends up building very successful fashion and perfume businesses.  Her lover during WWII is a high-ranking German officer who protects her from the Gestapo and who enables her to maintain her lifestyle. There are also concerns about her being anti-Semitic and having sympathy with the Nazi regime. The second half of the book also provides a lot of insight into the plight of Jews who escaped Germany and other parts of Eastern Europe to Unoccupied France, only to see their lives upended during the latter part of the war.  The well-known exit route of Marseilles to Casablanca to Lisbon is covered.

In sum, I found it a most interesting read that helped me escape for a while from the coronavirus world we are living in.

Below  is a review written by Selina Hastings for Literary Review.

I highly recommend it.

‘In the summer of 1938, the burning question on the Riviera was not what Germany was going to do next but whether or not to curtsey to the Duchess of Windsor.’ So begins Anne de Courcy’s fascinating account of the social history of the Côte d’Azur, beginning in 1930 and ending with the Allied landings in 1944. Since Queen Victoria’s first visit in 1882, the Riviera had grown increasingly fashionable, although it was not until the late 1920s that it began to attract visitors during the summer. It was exactly at this period that Coco Chanel, with the unerring foresight of the successful businesswoman she had by then become, bought La Pausa, her large and beautiful villa at Roquebrune, overlooking Menton on one side and Monte Carlo on the other.

Chanel, who in Paris lived in a suite at the Ritz, was almost unique in establishing herself as both a successful entrepreneur and a distinguished figure in high society. Her maison de couture in the rue Cambon had become world-famous, her dresses and perfume in demand among the wealthy all over the world. During her long life she had many lovers, among them the second Duke of Westminster and Igor Stravinsky, and a wide of circle of friends, not only in the aristocracy but also among painters, writers and composers. Her slender figure, fine features and supreme elegance were widely recognised and admired, her sartorial impact equally significant in Paris and the south of France.

By 1935, the popularity of the Riviera was at its peak among the rich and celebrated. Some of these were regular visitors, others were permanently embedded. They included Zelda and Scott Fitzgerald, D H Lawrence, Jean Cocteau and Somerset Maugham, as well as society figures such as Maxine Elliott, Daisy Fellowes, the Duke of Windsor and Mrs Simpson. Winston Churchill was a frequent visitor, Florence Gould regularly gambled away millions at the casino in Monte Carlo, and the elephantine Maxine Elliott at her luxurious Château de l’Horizon could be seen regularly hauling herself out of her swimming pool for yet another meal of gargantuan proportions. Once married, the Windsors moved into the sumptuously decorated Château de la Cröe, where the little duke, even at the height of summer, would appear in tweed jacket and tartan kilt wheezing incompetently away on his bagpipes. The passing of the Nuremberg Laws in Germany that year was largely ignored by haute société on the Côte d’Azur.

Along other parts of the south coast, however, the consequences of these events were unavoidable, as growing numbers of Jewish refugees began pouring in over the border from Germany. At first they were mostly made welcome, but as their numbers grew, so did an atmosphere of hostility and often bitter feelings of resentment among the local inhabitants. Memories of the last war were still uncomfortably vivid and in many communities xenophobia lay only just below the surface. Among the poorer classes, suddenly surrounded by newly arrived Jewish German immigrants, distaste and fear rose readily to the surface. Un Boche, c’est toujours un Boche was frequently muttered when a cleaning woman, employed by one of the newcomers, had been reprimanded or paid late.

Despite the growing menace of the Nazi regime, however, the smart set on the Riviera continued to enjoy themselves much as before. The summer of 1939 was full of firework parties, balls and open-air concerts – until suddenly, with the fall of the Maginot Line in May 1940, the whole country collapsed into chaos. When the Germans marched into Paris, millions took flight, making their way towards the comparative safety of the south. It was not long before conditions there dramatically deteriorated, with internment camps opened for refugees and foreign residents escaping by sea. The remaining population faced years of poverty and near starvation, with frequent riots taking place as supplies of food rapidly diminished.

Meanwhile in Paris, Chanel, always mildly anti-Semitic, felt little antipathy towards the enemy, and soon, at the age of fifty-eight, began an affair with a German officer thirteen years younger than she. Hans Günther von Dincklage, blond, handsome, charming and clever, was delightful company, regularly taking Chanel to dine in expensive restaurants, the German high command enjoying a luxurious standard of living denied to the rest of the city. As time passed, Chanel, accompanied by von Dincklage, even returned for a while to La Pausa, seemingly unaffected by the misery and chaos all around, the horrific sight of thousands of Jews rounded up for deportation and the visible impact on the local people of the desperate shortage of food.

In 1944, after the Allies had landed on the coast near Cannes and the Germans had left Paris, Chanel, suspected of collaboration (not only because of her relationship with von Dincklage, but also because of a couple of unexplained visits she had made to Madrid and Berlin), was taken in for questioning. After only a few hours of interrogation, however, she was released. It was later assumed that this was due to her friendship with Churchill.

In Chanel’s Riviera, Anne de Courcy has written a well-researched and compelling story. She maintains a remarkable balance between, on the one hand, Chanel and her world of the rich and famous and, on the other, the lives of ordinary people desperately struggling to survive in a country on the brink of annihilation. Drawing on an immense volume of material, she has succeeded not only in constructing an intriguing portrait of Chanel herself but also in expertly conjuring the two very different worlds that then existed side by side.